Are y'all ready for an A Star Is Born reunion? It might not be happening just yet, but Bradley Cooper already has ideas. No, it's not going to be a sequel. (Y'all did see the end of the movie, right? Pretty much seals the deal on no Ally and Jackson reunions.) But Bradley Cooper's idea for an A Star Is Born reunion with Lady Gaga is bound to get Gaga and Cooper stans bubbling with excitement.

In an appearance on The Ellen DeGeneres Show airing April 25, Cooper laid out his idea for the possible A Star Is Born reunion for fans who really can't get enough of the film. Given that "Shallow" won an Oscar and a Grammy (and a bunch of other awards), DeGeneres asked Cooper if an A Star Is Born tour is in the cards.

"I mean, no," he said with a laugh (crushing my dreams). "But what I thought would be a cool thing to do, maybe one night, would be like a live reading of the script and sing all the songs as we read the script, like at the Hollywood Bowl or something." Yes!! This!! Give us this!!

Part of the reason an A Star Is Born tour won't happen? Cooper's not a singer! His words, not my shade.

Speaking on his and Lady Gaga's steamy Oscar performance of "Shallow," Cooper told DeGeneres, "I actually wasn't nervous, because I worked so hard, and Lady Gaga is so supportive. But it was terrifying."

"Because I'm not a singer and I didn't sing before this movie, so it was really crazy," he added. "But it just shows you that if you work really hard, and you're with supportive people, you can do things that you never dreamed possible." 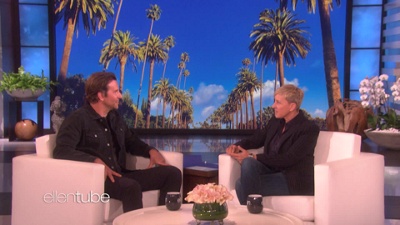 Unfortunately for Gaga stans, it doesn't look like an A Star Is Born tour will ever happen. But they can still catch performances of "Shallow" during Gaga's Las Vegas show, Enigma, and when she goes on tour for her sixth studio album. (She hasn't announced the release date for the album nor has she hinted at a tour, but she did confirm there's an album coming. And where there's an album, there's usually a tour.)

A special reading of A Star Is Born with live music performances sounds like the best combination of Gaga and Cooper's respective music and film worlds, so fingers crossed that happens.

The funniest thing Cooper revealed in this interview with DeGeneres is that when they were filming the A Star Is Born scenes that showed Cooper's Jackson Maine performing at music festivals, no one was actually hearing any music!

Referencing the performance at the Glastonbury music festival that's featured in the movie, Cooper said he got on stage and sang "Maybe It's Time" twice for filming purposes. (Kris Kristofferson, who played the tragic rocker in the 1976 version of A Star Is Born, performed directly after Cooper, in a cool turn of events.)

"And the audience loved it," DeGeneres asked.

"Well, they couldn't hear it 'cause we never played anything through the PA system" Cooper revealed.

"What?!" DeGeneres said back, saying what we're all thinking.

"We couldn't release the music before the movie came out," Cooper explained. "That's why you don't know if they're going to throw a bottle at you 'cause they're like, 'Who is this?!'"

Just to make sure we're clear on this, while filming A Star Is Born, Bradley Cooper performed at music festivals, filmed said performances, but to everyone in the audience, he was just standing there randomly strumming a guitar.

Maybe it's good they're not doing an A Star Is Born tour... no one could guarantee that Bradley would hook his mic up to the PA system!!