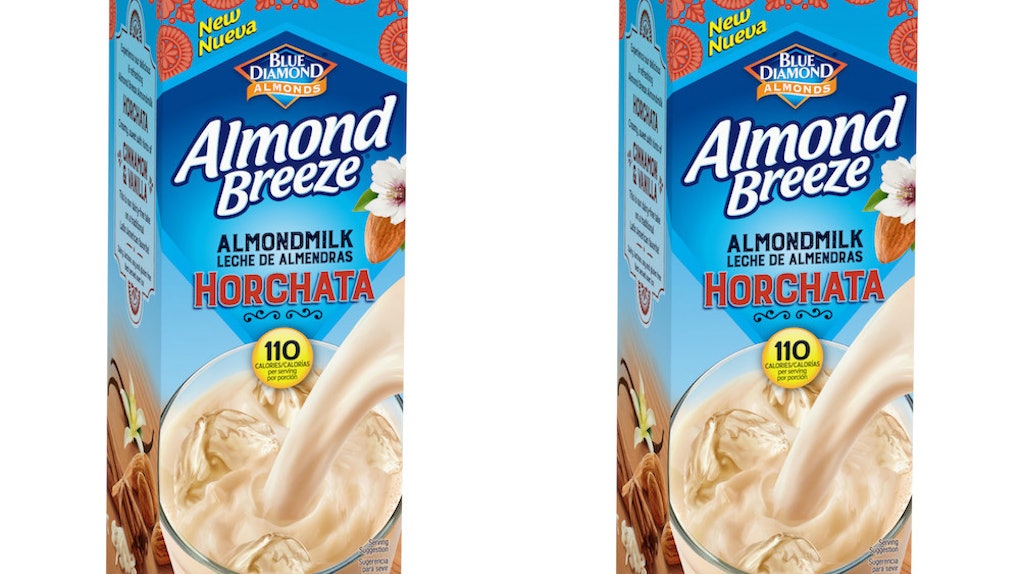 Maybe your lactose intolerance finally has you looking to completely cut dairy out of your life (RIP), or you might simply be searching for a tasty addition to your morning cup of coffee. Either way, almond milk never fails to be a solid choice in the realm of dairy alternatives, and you'll be happy to know one of the market's latest and greatest flavors is inspired by a delicious traditional Latin American beverage. So, if you haven't already tried this Blue Diamond Almond Breeze Almondmilk Horchata, it looks pretty unbeatable.

Blue Diamond just revealed a totally new addition to its line of Almond Breeze Almondmilks, and as an almond milk fiend, I'm psyched beyond belief. The newest flavor is called Blue Diamond Almond Breeze Almondmilk Horchata, which — according to the brand — is a dairy-free version of horchata. If you've never had horchata, Michelin Guide describes it as a traditional Latin American Drink that's traditionally made with several ground ingredients, including almonds, sesame seeds, rice, barley, tiger nuts or melon seeds. I, personally, cannot wait to try it.

Texture-wise, according to Diamond Breeze, their Almond Milk Horchata is incredibly creamy, and in terms of taste, it's somewhat sweet, boasting subtle hints of warm vanilla and sweet cinnamon. Whether you want to pour it over a heaping bowl of Cheerios, or if you would rather sip it all on its own, it's super tasty and versatile. Bottom line: after just a single sip, you'll most likely be craving more.

Luckily for horchata fans and almond milk enthusiasts across the nation, Blue Diamond's new Almond Breeze creation is going to be widely available at the end of May 2019. According to the brand, you will be able to find it at a selection of retailers throughout southwestern U.S. states, including California, Nevada, Colorado, Utah, New Mexico, Arizona, and Texas, as well as markets throughout New England and New York (phew!). Each carton has a suggested retail price of $2.49, but if you ask me, a delicious nut milk is totally priceless.

Back in August 2017, Starbucks offered a somewhat similar drink called the Horchata Almond Milk Frappuccino. Yes, you heard that loud and clear, folks — participating locations in the U.S. and Canada were serving their own version of the traditional Mexican sip, but sadly, it was only available for a limited time, lasting only the duration of the summer. It consisted of almond milk, cinnamon dolce syrup, coffee, and ice, and if you ask me, it had to have been one of the greatest Frappuccino concepts known to coffee drinkers. Maybe try making one for yourself with Blue Diamond's Almondmilk Horchata — it could honestly be amazing.

Maybe you're looking to decrease your dairy intake, or there's a chance you're just trying something new. Regardless of your reason, Blue Diamond's dairy-free take on horchata sounds positively unbeatable. Luckily, it's going to be available super soon, and whether you decide to blend it into a homemade Frappuccino or if you're planning to drink it all on its own is entirely up to you. And don't let anyone hinder your experience by dragging you into the "is almond milk actually milk" debate — it definitely isn't worth your time.