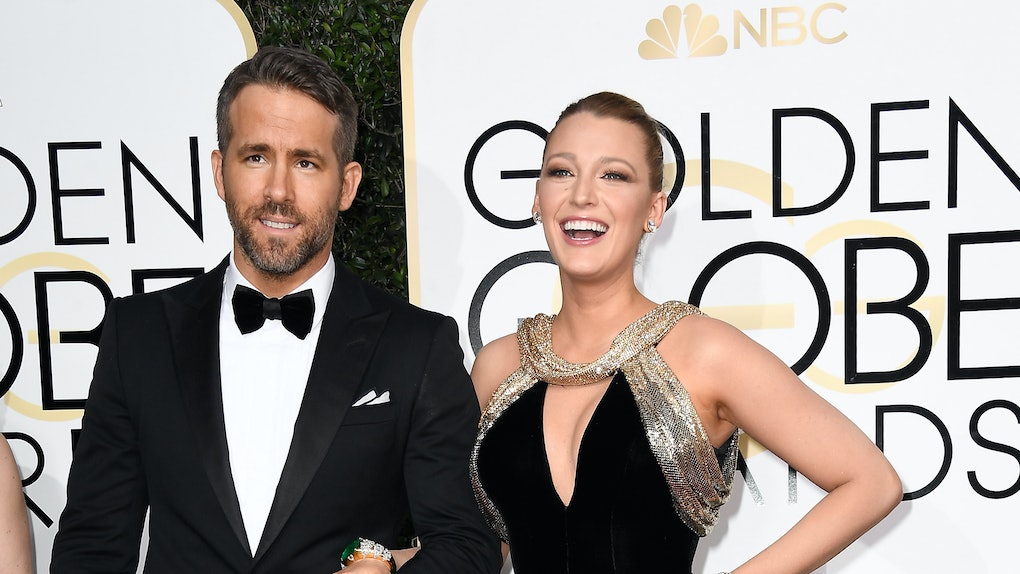 Blake Lively and Ryan Reynolds are no strangers to being the adorable (and hilarious) celebrity couple of your dreams. Ever since these two got together, they've served up some killer red carpet moments (just look at them), but in the grand tradition of life being totally unfair, these two also happen to be quite hysterical — especially on social media. Oh, and you don't even hate that they're both beautiful and funny because they're just that cool. The latest comical exchange between the couple will not disappoint, and you'll agree when you see how Blake Lively trolled Ryan Reynolds on Instagram with an expert jab about his baking skills.

Lively took to her Instagram on Saturday, Dec. 23 to show off the family's attempt at some traditional holiday baking. She posted a photo of some-less-than perfect sugar cookies. The scene was filled with an almost-completed snowman cookie and a lot of melted frosting. Maybe the couple's two young daughters, James and Inez, were getting in on the holiday baking action to impress Santa with their skills?

Nope. Lively cleared up who was responsible for the cookie catastrophe in a caption that will bring you some holiday laughs. She wrote, "@vancityreynolds made some Christmas cookies...He’s verrry handsome though." Verrry handsome, indeed.

OK, so it turns out that Deadpool isn't exactly an Ina Garten-in-training, but Reynolds took Lively's expert jab about his baking skills (or lack thereof) in stride. According to Marie Claire, he responded to the photo with this equally witty comment: "I wanted to be the first person to bake Christmas cookies using only a hammer." Ah, it makes sense. A carpenter (er, baker) is only as good as his tools, right?

Lively has good reason to take the upper-hand here, too, because when she's not posting chic AF ensembles on her Instagram, she's sharing tasty-looking confections whipped up all by her bad self.

Here's a photo of an apple pie Lively baked in October of this year.

Just look at those leaf cutouts.

And when it comes to roasting your significant other on social media, these two invented the damn game. Remember Reynolds' birthday message to Lively back in August?

He posted an (admittedly) handsome-looking picture of himself and Lively, but Lively was basically cut out of the photo that was simply captioned with, "Happy Birthday to my amazing wife."

You would think that this was clearly a mistake and Reynolds meant to post an actual photo of his gorgeous wife, but nope, it was just the #RealtionshipGoals of couples partaking in some adorable Twitter tomfoolery.

Below is Reynolds' special birthday message to Lively.

Since Reynolds is not the only heavy hitter in this relationship when it comes to jokes, Lively followed suit and posted a unique birthday message to her husband in October. Her rendition featured a dashing picture of Ryan Gosling with a bit of Reynolds peeking in on the side.

Once again, her caption was the hilarious nail in the trolling coffin. She kept it simple and wrote, "Happy Birthday, baby."

Do you need more proof that these two are the the perfect combination of hot and hilarious? Probably not, but they're even more than that, too. They're also the perfect support system for each other. Reynolds revealed that Lively helps him manage his anxiety in January 2017 , according to an in interview with Variety. He recounted how the lead-up to the release of his film, Deadpool, was very stressful for him, but Lively helped him get through it. He said, "I'm lucky to have her around just to keep me sane."

Honestly, could those two be any more perfect for one another? BRB, swooning forever.

More like this
Here's How To Go Live On TikTok To Switch Up Your Videos
By Daffany Chan
What Does Pepsi Blue Taste Like? It Has Familiar Fruity Flavors
By Cianna Garrison
Daily's Poptails Frozen Alcoholic Pops Are Wine-Based, Fruity Treats
By Cianna Garrison
Stay up to date