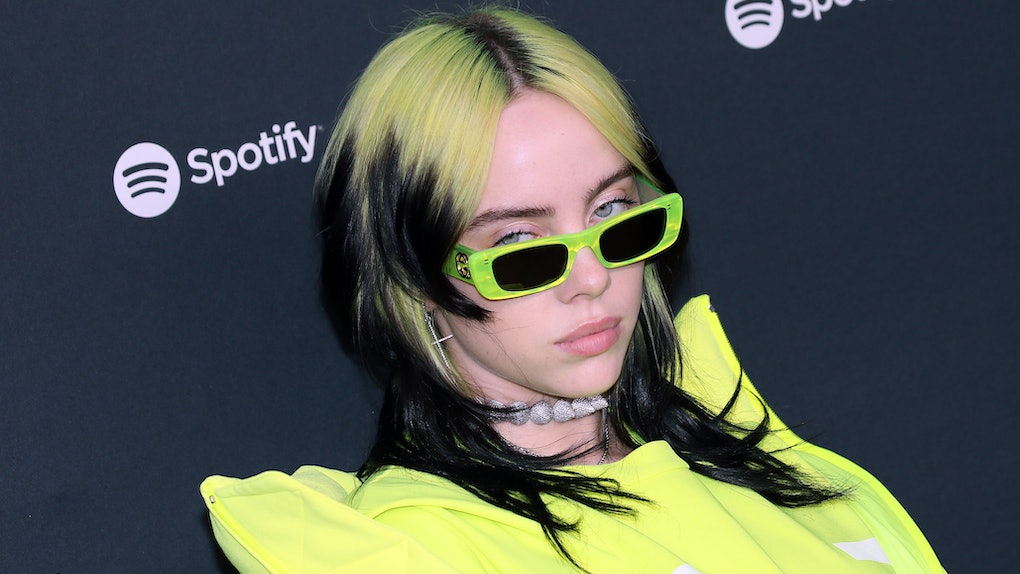 There's a new Billie Eilish song coming soon, the singer announced on her Instagram on Friday, July 24. In fact, Billie Eilish's new song "My Future" is releasing sooner than you might expect. Here's when the track is set to drop.

Eilish took to Instagram to post a photo of herself sporting some baggy gray sweats and sneakers as well as a black face mask. In the background of the shot, you can see the Los Angeles skyline and a pink-hued sunset. "'My Future' out Thursday," she wrote, revealing that she's dropping her new track is less than a week. Eilish didn't give the fans anything more than the brief announcement, and as of publication, there is no further information on the track.

Billboard pointed out that Eilish's new tune may follow the theme of the No Time To Die 007 film. Eilish released her song for the movie on Feb. 13, 2020. The publication also suggested that "My Future" may share similarities with her 2019 track, "Everything I Wanted."

The vague IG post has over 10 million likes already, showing off Eilish's star power. Eilish stans are impatiently awaiting her sophomore album, following the sweeping success of her debut album, When We All Fall Asleep, Where Do We Go? in 2019. The album won five Grammys, cleaning up at last year's ceremony by taking home trophies for best new artist, as well as best song, record, and album of the year. Her producer brother Finneas also won a Grammy for his work on her album.

Unfortunately, Eilish didn't offer up any more details about the new single on Twitter, writing only, "Billie Eilish — 'My Future', out next Thursday."

Eilish stans on Twitter are already expressing their excitement for the beginning of her new era:

The release date for Eilish's second album has yet to be announced, but she and her brother Finneas did tell Vulture that it was already in the works back in March. "We've started working on the new album," Finneas said. "And I think the best thing we can do is stay out of our own way. The first album was pretty pure in its intention. We didn't set out to write a darling album," recalled Finneas. "Our only target was to make an album that we liked to play live. I think that's all we're gonna do for the second. All the other things are side effects. You can't aim for those," he said.

Prior to the announcement of the new track, Eilish has been posting in support of Black Lives Matter and spreading the word about systemic racism. She also recently unfollowed everyone on Instagram, reportedly due to recent sexual assault allegations surrounding several celebs back in June 2020. As of Saturday, July 25, her "following" list is still at zero.

While Eilish has been trying to use her time to positively impact the world, she's also clearly been cooking up some new music. You can mark your calendar to stream her new "My Future" track when it releases on Thursday, July 30.