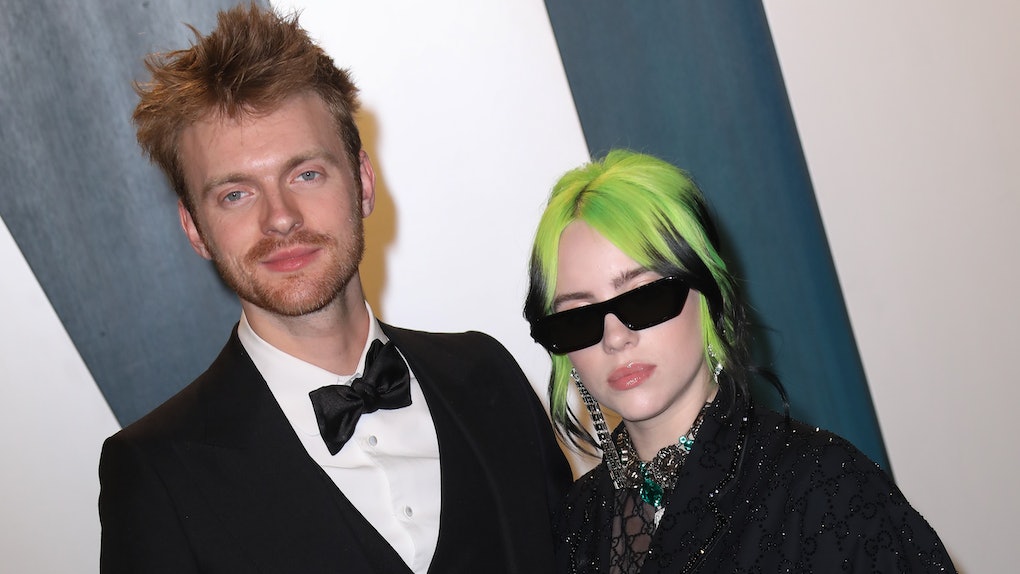 Billie Eilish and her brother Finneas are one of the tightest pairs of siblings in the music industry today. They make music together, perform together, tour together, and they definitely win a lot of Grammys together. Throughout their journey to the top, Eilish and Finneas have had each other's backs and actually spend most of their acceptance speeches and interviews showering each other with compliments. The sibling love is real, and considering they have the ability to work together in a small bedroom-turned-studio for hours without killing each other, is remarkable. Eilish and Finneas have done it again and again. Their bond is unbreakable and you can totally tell when you read Billie Eilish and Finneas' quotes about each other.

The siblings don't hold back when it comes to talking about how much they care for and respect each other. So much so, they wrote an entire song about their close-knit relationship called "Everything I Wanted." In a behind-the-scenes featurette dropped by Beats By Dre on Nov. 29, 2019, Eilish opened up about the song's meaning, saying, "We decided to make it about our relationship and how we help each other and, like, deal with things together." The song is incredibly moving, just like these seven quotes from the Eilish and Finneas about their bond.

1. Eilish Thinks Finneas Is A Genius

In August 2017, Eilish was interviewed by her brother Finneas on Fuse. Finneas asked her thoughts on making music with him in their childhood bedroom, and she sang his praises, of course.

"Finneas is really good at writing music, you guys," she said to the crew, before speaking candidly about making music with her brother. "We got to sessions with people we don't know — they're all like 80. But it's a whole separate world... and it's like, whatever comes out of me and you [gestures to Finneas] is the realest, I think."

On July 30, 2018, Eilish posted a touching tribute to Finneas for his birthday. The post featured an adorable photo of the pair as tinty tots.

On Sept. 29, 2019 Eilish and Finneas performed on Saturday Night Live together. The moment was one for the books and Eilish was stoked to share it with Finneas. She dished on the amazing night in an Instagram post, writing, "MY BROTHER IS MY BESTFRIEND AND WE DID SNL LAST NIGHT AND IT WAS A PEAK LIFE EXPERIENCE. WOW. THANK YOU LIFE FOR GIVING ME WHAT I HAVE."

4. Finneas Is OK With Being Known As Eilish's Brother

On Dec. 7, 2019, Eilish accepted Variety's Hitmaker award, and in a heartwarming speech she thanked Finneas for giving her life.

“A big thank you to my big brother Finneas. Finneas is my best friend, my big brother, he’s four years older than me and we’ve been best friends forever," she started. "We started making music together when I was 13 and he was 17; he produces everything. He’s the only reason I’m anywhere in the whole world and he’s probably the only reason I’m alive.”

Eleven day later, Finneas wished his little sister happy birthday in a heartwarming tribute on Instagram. "You’re my reason. For everything. Happy birthday, I love you more than life itself," he wrote.

6. They Can't Stop Supporting Each Other

Ahead of the 2020 Grammy Awards, Eilish and Finneas spoke with CBS This Morning's Gayle King about Eilish's six Grammy nominations and journey to success.

Eilish and Finneas couldn't stop doling out compliments about each other's creative genius during the Jan. 24 interview. At one point, King asked Finneas when he knew Eilish was a gifted singer. He jokingly replied, "She was always better than me and that was frustrating.

"Growing up, I actually thought I was a terrible songwriter because [Finneas] was so good," Eilish revealed. "Then he would literally tell me that I was so good at singing, he thought he was bad at singing. So we both have these opposite strengths."

7. Working Together Never Gets Old

After Eilish and Finneas swept the 2020 Grammys on Jan. 26 — taking home five awards, including the big four for Best New Artist, Song, Record, and Album of the Year — Finneas spoke with Vogue about their historic night on Feb. 13. He also touched on what makes the siblings perfect collaborators.

"We just love each other and are honest with each other, and we speak the same creative language. There’s no other person I like working with as much as my sister," he shared.

This sister and brother duo are nothing short of amazing. Eilish and Finneas' bond is truly special and something all siblings can hope to have one day.

More like this
How Long Has Billie Eilish Had Blonde Hair? She Hid It For Months
By Daffany Chan
Mark Tuan's Quotes About His Solo Career Tease Endless Potential For The Future – EXCLUSIVE
By Michele Mendez
Cardi B's Quotes About The Racial Pay Gap In The Entertainment Industry Needed To Be Said
By Brandy Robidoux
Stay up to date