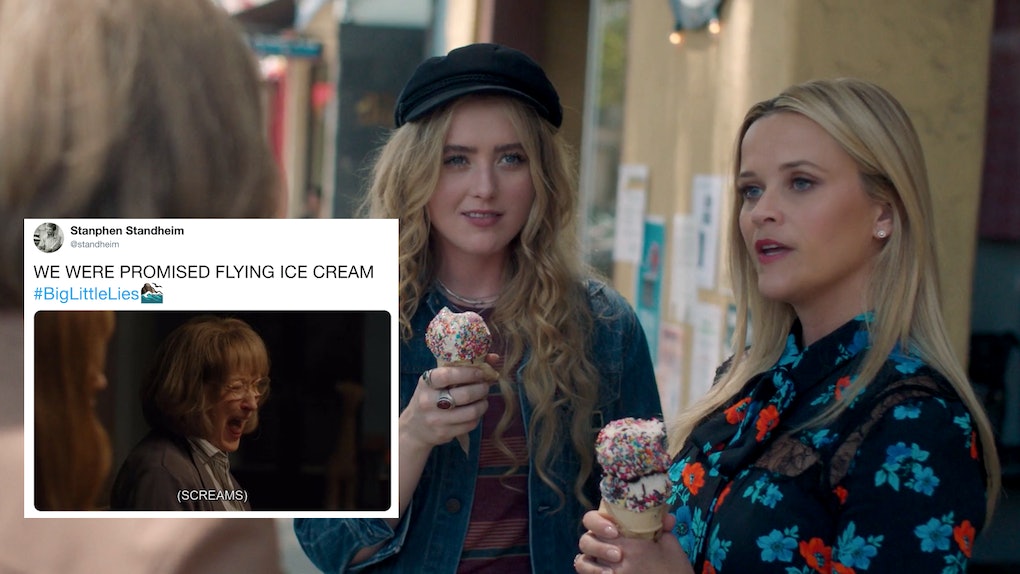 Ever since paparazzi photos caught Reese Witherspoon hurling an ice cream cone at Meryl Streep last year, Big Little Lies fans have been eagerly anticipating the chilling attack in Season 2. In Sunday night's latest episode, we finally got to see Madeline Mackenzie carrying her infamous ice cream cone while confronting Mary Louise Wright on the street... but disappointingly, the cone never left Madeline's hand. That's when fans had to face the cold, sprinkle-coated truth that Big Little Lies Season 2 cut that viral ice cream scene. While upset fans voiced their outrage online, there actually will still be a way to watch the scene in the future.

Spoiler alert: This post contains spoilers from Big Little Lies Season 2 Episode 5, "Kill Me." Back when the set photos of Reese Witherspoon throwing ice cream at Meryl Streep were first taken last summer, fans had no idea why Witherspoon's character of Madeline Mackenzie might be so mad at Streep's new character Mary Louise Wright. But now we all know why Madeline would happily pelt Mary Louise with frozen desserts. The two have made it clear that they do not like each other since first meeting, and they have been at odds all season long as Mary Louise needles her way into Celeste's personal life.

Madeline was extra mad at Mary Louise during the ice cream scene, though, after having just found out that she was taking Celeste to court to try to win custody of Celeste's twin sons. It would track that Madeline would hurl her ice cream at her nemesis in a fit of rage, but instead, we just see her yell at Mary Louise a bit as she walks away, ice cream still firmly in hand.

Big Little Lies fans who were hungry for a soft-serve smackdown were left in the cold, though, and Twitter began to blow up with disappointed tweets from fans. Check out some of the best below:

Reese Witherspoon herself even got in on the Twitter fun by sharing that at least everyone will always have the memories (and photographic evidence) of that time she pelted Meryl Streep with an ice cream cone.

And thankfully, it sounds like although the scene got scrapped from the final cut of Episode 5, fans will still be able to watch it when the Season 2 DVD is released. Meryl Streep confirmed that the ice cream throw will be included in the DVD extras as a deleted scene from the season, so we will be able to see it happen eventually.

HBO has not yet given any explanation as to why the scene was cut from the episode, so it is left to fans to try to figure out. Maybe the creative team saw the moment as too over-the-top... which sounds ridiculous since over-the-top is what Big Little Lies is. Or maybe the moment played too comic and felt out of place among the particularly grim final moments of Episode 5. Whatever the reason, fans will just have to be content with staring at the paparazzi photos until the Season 2 DVD is released with the scene.

More like this
These Tweets About The Train Scene In 'The Handmaid's Tale' Season 4 Are Emotional
By Ani Bundel
The 'A Million Little Things' Season 3, Episode 13 Promo Is A Dose Of Reality
By Umber Bhatti
When Will 'Riverdale' Season 5 Return In 2021? Its Mid-Season Break Is Long AF
By Rachel Varina
Stay up to date