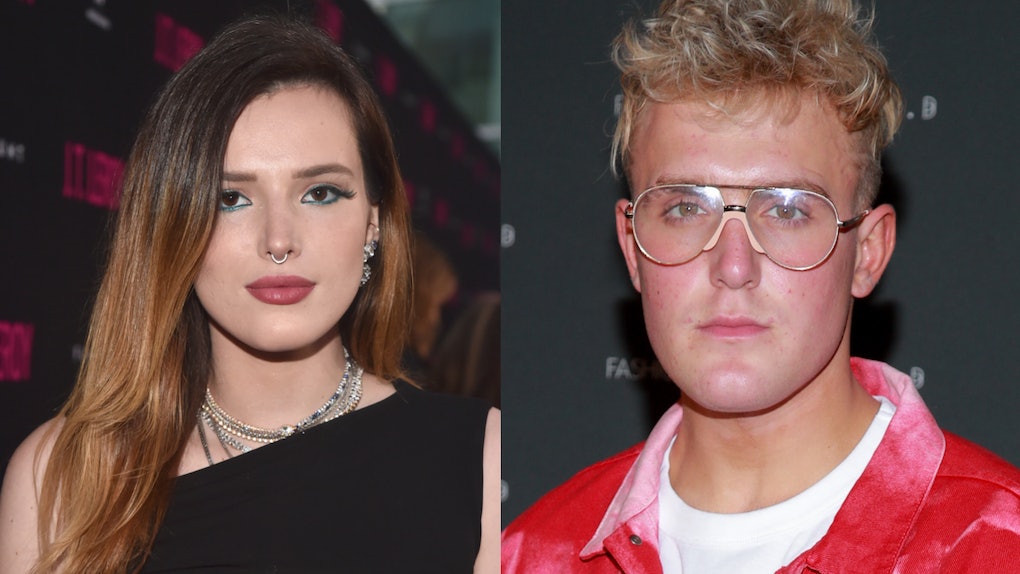 Bella Thorne Called Out Jake Paul For Having Lunch With Erika Costell & Oh, The Drama

Ah, what a tangled web they weave. OK, so here's the deal. It turns out Tana Mongeau's ex Bella Thorne called out Jake Paul on Twitter on Aug. 29 for getting lunch with his ex Erika Costell while Mongeau's family was reportedly going through a tough time. Well, to be fair, Thorne was really just responding to a tweet that was written specifically for her. In the tweet, user @spaghettibrainn, wrote alongside pictures of Paul on his reported date with Costell:

Jake has used all the clout he can from @tanamongeau so now he’s over it and moving on to newer scandals that will bring him clout. @bellathorne help us get hot girl summer Tana back!!

In response to the cry for help, Thorne wrote: "While her family is going thru some s**t... not a good look jake." She paired the tweet with the sick-looking emoji with the head bandage because, I mean, doesn't just the simple act of keeping up with this news give you a headache too?

The s**t Thorne is referring to could be the same family "emergency" Mongeau cited in a series of tweets as her reasoning for postponing her honeymoon with Paul. "Last night was an unconventional crazy girl’s dream wedding,” she wrote after her Vegas nuptials to Paul. “I love jake so f**king much and there’s no one else on earth i could’ve done that with. truly slow dancing while they’re screaming," she wrote. "We’re both still recovering hard- Jake’s headed to Europe and i have to deal with a family emergency.... i’m gonna meet him there the second i can."

Especially because Mongeau, herself, isn't too pleased about the news of Paul's lunch date with Costell. Mongeau took to Intstagram to share how she was really feeling with her own little remix of Ariana Grande's "thank u, next."

In the lyrics followers can hear Mongeau sing, through laughs, "wrote some songs about Hunter now I listen and laugh/Even actually got married and for Jake I'm so thankful except when he goes out to lunch with his ex and I find out on Twitter."

Just when you thought things could not possibly get any more confusing or complicated, let's not forget about this little factoid: Paul told The New York Times during a 2017 interview that his entire relationship with Costell was fake. The interview took place just a couple of months after Paul posted a video entitled, “We Actually Got Married…,” in which yes, the couple appeared to have tied the knot. But Paul openly noted that the entire relationship was just concocted by him and Costell to entertain their fans. “We’re not even actually dating,” Paul told The New York Times. “It’s like the WWE. People know that’s fake, and it’s one of the biggest things of entertainment.”

I guess Mongeau has less to worry about since Costell was apparently never even actually her husband's ex?

That being said, people aren't even 100 percent sure that Paul and Mongeau are legitimately married. The two publicized their wedding day in Las Vegas all over their social media channels on July 28, even selling a faulty livestream of their special day to particularly devoted fans for $49.99. So, yes, in that sense it appeared to be real.

Buuuuut BuzzFeed reported that, as of July 29, they were still not registered as legally married... which, you know, is just a wee bit suspicious. But, hey, who knows what's really going on behind closed doors?