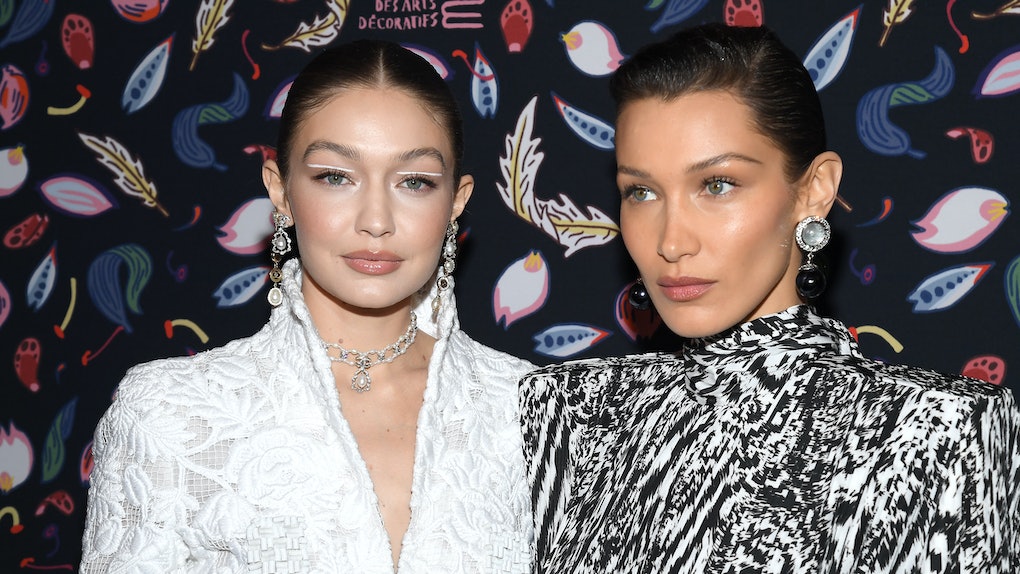 Kylie Jenner recently became yet another meme thanks to her tequila on the rocks moment on the latest episode of Keeping Up with the Kardashians. There are a ton of tweets using the new meme, but Bella and Gigi Hadid's video of Kylie Jenner's "Wasted" meme is the best thing to hit the internet yet. Check out the hilarious lip sync from the famous sisters, which quickly earned the Kardashian-Jenner family's seal of approval.

ICYMI, the Thursday, Oct. 8 episode of KUWTK, titled "Trouble in Palm Springs," brought the girls to Palm Springs, California for a mother-daughter getaway. While Kris wanted a nice, peaceful time, an unexpected blow-up between Kendall and Kylie over an outfit created a ton of tension. The Palm Springs trip also introduced the latest Kylie meme, and just like her "Rise and Shine" song from last year, it was another viral musical moment. At dinner with her sisters, Kylie ordered a 1945 Don Julio tequila on the rocks with ginger ale, and after ordering a second drink, Kylie sang, "Cause I'm gonna get wasted. I just finished a whole cup of 42 and I'm about to go for my second one." Kylie quickly turned to Kourtney and asked her, "Kourtney, what the f**k are you on?!" Kourtney replied, "I don't know what's going on, so I'm just appreciating my bread." The moment quickly became a meme, and the Hadids made a pretty epic recreation of it with a lip sync.

Bella posted a lip sync video using Kylie and Kourtney's audio with her sister, and as noted by Comments By Celebs, both Kylie and Khloé loved it. Kylie commented "iconic" with several laughing emojis and her sister Khloé wrote, "Hahahahahaha i am dead."

The memes that lit up the internet following Oct. 8's episode were almost as funny as the Hadids' lip sync:

Even Joe Jonas and Sophie Turner got in on the action:

The Palm Springs episode was full of drama, including that intense fight between Kendall and Kylie over an outfit situation, and later, a ride.

Since the episode aired, the makeup mogul addressed the flare-up on Twitter, saying she regretted the moment. "Sister fights like that are never ok!!! #kuwtk," Kylie wrote. She also retweeted a video of she and Kendall fighting when they were little, commenting that the recent situation was pretty much the same thing:

Despite the drama of the episode, Kylie still enjoyed some tequila and gifted the internet with a brand new meme, plus some glorious lip syncs from the Hadid sisters and part of the Jonas clan.