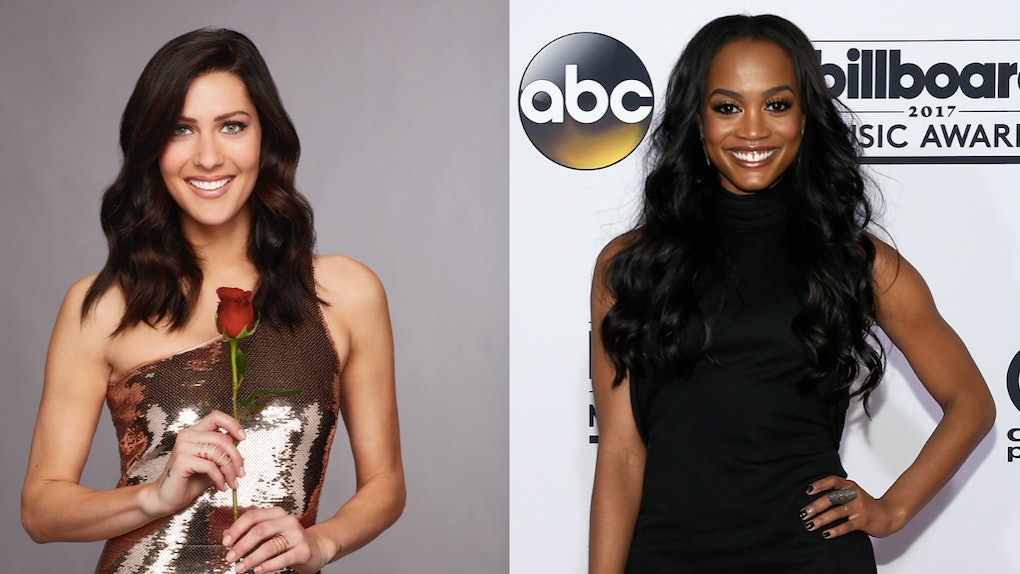 I can't believe it, but we're almost completely done with this season of The Bachelorette. Another "love journey" is almost complete, and this time, we got to witness Becca Kufrin go from being heartbroken over... ahem, last season's lead to being totally in control of her own love life. The current and former bachelorettes are both amazing, and they're totally different from each other. It's interesting to look at Becca Kufrin and Rachel Lindsay's zodiac signs to gain insight on their approach to relationships.

I spoke with astrologer Linda Furiate to learn how Kufrin and Lindsay's respective zodiac signs influence how they are in dating and relationships.

"As an Aries, Becca may come across as a confident, strong-willed woman," Furiate tells Elite Daily. "She appears to know what she wants and is not afraid to go after it."

This was clearly seen throughout Kufrin's season. On night one, she immediately sent home Jake Enyeart. He was someone she knew back home, and she questioned his intentions, since he never expressed interest in her before. Kufrin read through the excuses he was trying to offer her (how many times they met, for instance) and she knew right then and there he wasn't the one for her. So she sent him packing.

"Her communicative style may be somewhat aggressive with a strong need to voice her opinion," Furiate says. "She wants to be heard and often may feel her thoughts are better than others."

She adds, "In relationships, she may prefer the chase much more than the catch. She gets bored rather quickly unless the guy is constantly doing for her. She prefers the attention to be directed toward her. This can be a lot for a guy to live up to if he is to also feel like an equal partner."

We'll see if this is true for her and her pick in the post-season — Kufrin confirmed that she is in fact engaged.

Previous lead Rachel Lindsay's birthday is April 21. Her sign is Taurus, which Furiate describes as typically being "patient, loyal, and practical."

She says Lindsay desires a partner long-term, which was evident when Lindsay went a bit harder on Peter Kraus during her season for not willing to propose. And, you know, because she found her match in chiropractor Bryan Abasolo. Fans were critical of Lindsay at that point for "settling" for Abasolo, but since the show aired one year ago, it's clear Abasolo is a perfectly supportive, committed, and stable complement to Lindsay.

If you know other people with a Taurus sign that aren't as direct as Lindsay, it could have to do with her planet Mercury, Furiate says.

"Rachel’s communicative style tends to be more assertive than the average Taurus. This is because her planet Mercury which rules our communication is in the sign of Aries," she says. "She may lack patience in her relationships if she feels a guy is not able to step [up] and provide. She is not afraid to tell it like it is when she wants what she wants."

Fans will remember when DeMario Jackson's ex showed up during Lindsay's season, Lindsay's lawyer skills came out to play. She listened to all sides of the story, then told Jackson he was not what she wanted.

While it's clear both Kufrin and Lindsay had different experiences being the lead, these two Bachelorettes are both direct, assertive, and won't accept any nonsense when it comes to finding love in relationships. They both get my final rose.