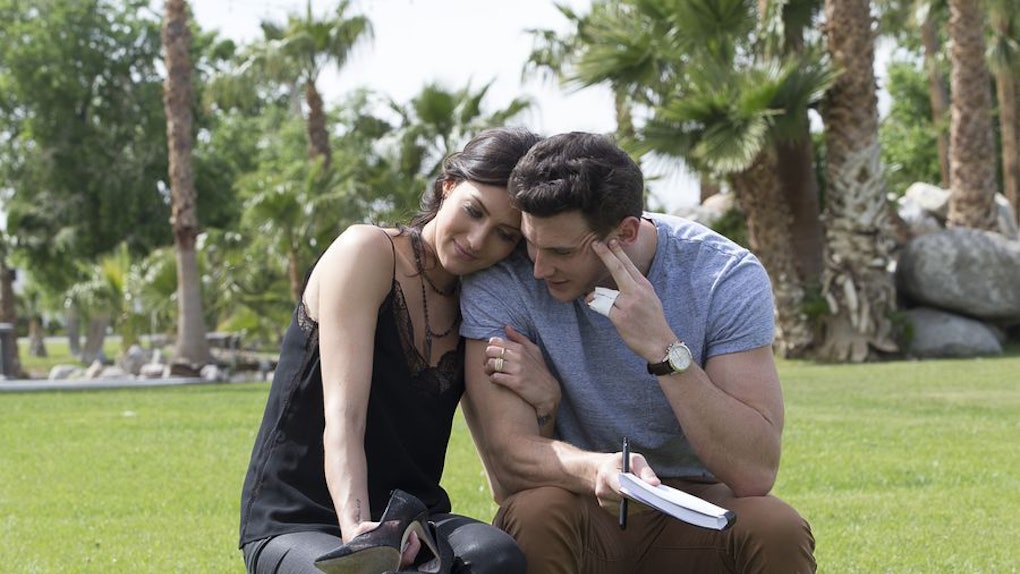 So, I have to confess: I've never been a big fan of The Bachelor franchise. It's always been a bit too soapy for my taste. But, umm, folks... I think maybe my cold, dead heart is not so cold and dead after all, because — and I can't believe I'm saying this — OMG! I'm totally shipping Becca and Blake on this season of The Bachelorette! When Blake told Becca he was in love with her, I kind of melted. This actually feels l like it may be real love, if Becca and Blake’s body language on The Bachelorette is anything to go by.

As it turns out, I'm not the only one noticing how hot the chemistry and body language is between this couple; the topic came up on the most recent episode (the infamous "hometowns" episode) when Blake brought Becca home to meet his family. When Blake sat down to talk to his father about his growing relationship with Becca, his dad mentioned the dynamic between them saying, "The body language between you two, it really does feel like you guys have feelings for each other." He went on to express his concern that Blake was in danger of having his heart broken again, saying "If she doesn't pick you, you're going to get crushed, and how do you deal with that? Have you thought that far down the road?" Blake did his best to assure his father that even though he was afraid of being hurt, it was worth the risk.

"Every single conversation I've had with her has been nothing but just amazing," Blake said. "Like I've been waiting kind of for, like, us to have, like, a misstep here or there, but we haven't had it." Seriously, stop, my heart can’t take it.

So, while both myself and Blake's pop are picking up on the couple's vibes, neither of us (as far as I know) are experts on the subject, so I reached out to an actual body language expert, Blanca Cobb, to see what she sees happening between Becca and Blake over the course of the season. Here's what she has to say.

Becca may be feeling a bit shy on their first date.

In this first image, Cobb sees a couple just getting to know one another, and yet there is some level of closeness and connection.

“Blake and Becca are standing close, but not too close in this photo. They both have big smiles for the camera,” she says. Cobb also sees that there are signs that Becca has a bit of the first date jitters as well, pointing to they way “his shoulder is slightly in front of hers,” which suggests “she’s feeling a bit shy or reserved.”

By the group date, however, she seems much more in her element and ready to get closer to Blake. A few days have passed since their first date, after all.

The first thing Cobb notices is likely what you’re seeing. “What a tender moment!” she says. In this case, Becca’s body language is more demonstrative, as Cobb points out, saying “Becca is laying her head on Blake’s shoulder and has her arm wrapped on his arm.” And while Blake reciprocates by leaning in to get closer, too, Cobb notes, “What’s interesting is that he’s holding a pen and notebook in his right hand instead of putting the items down to drape his arm around her.” So, perhaps he’s still holding back a bit.

Things are really heating up between them on their second one-on-one date.

On the second date, Cobb sees a couple that is really heating up and experiencing some strong sexual tension. As she explains, the way “their bodies [are] flush against each other, where no air can get in between them, says they’re feeling the heat (and not from the sun),” adding, “When you’re feeling passionate about someone, you tend to bring them as close to you as possible. So close that what I call their 'pleasure zones' are touching.” So hot!

In this image, Cobb sees that it’s not just a physical chemistry between the couple, but there are signs of a growing emotional connection, as well.

“When couples are feeling the love, they tend to look deeply in each other’s eyes,” explains Cobb, adding, “Exactly what’s happening here on the shore. Becca’s standing on her tiptoes to get a closer look into Blake’s eyes. She’s leaning into him, which says she’s into him both figuratively and literally.”

Blake’s big confession has a powerful effect on Becca.

OK, here’s the big moment when Blake finally put it all out there and told Becca he was in love with her. If you haven't seen it, I highly recommend watching the full video. It’s really sweet and romantic throughout. However, there were a few moments in particular that are standouts to Cobb.

The first moment happens at the 3:02 mark, where Blake confesses his love. Cobb points out how “Becca drops her head and leans toward him, and Blake kisses her forehead.” She explains that this is significant because, “You move toward people you like and love. To hear Blake profess his love spoke to her heart.” And Blake backs up his words with his loving body language, says Cobb, at the 3:08 mark when “Blake cradles her head in between his hands as they kiss.”

It’s a powerful moment for the audience, and perhaps an overwhelming one for Becca. As Cobb points out at the 3:30 mark, she asks him to repeat what he said, but she keeps her eyes closed. “Interesting that she kept her eyes closed instead of looking directly into his eyes,” says Cobb. “It could be she wanted to focus on the sound of his words. Or, it could be that it was a bit much to hear him that he’s in love with her. And perhaps, her body wasn’t sure how to respond.”

In this final image, taken from the two visiting Blake’s home, Cobb sees two people who realize the significance of this moment. Cobb says it shows in their expressions, explaining that “[It’s] a serious moment for the couple as they give each other a serious look.” Anyone who has gone home to meet their partner's parents knows it can be a really stressful experience, even without the cameras and the parents knowing that you're currently dating other people as well, so Cobb notes that, it’s a good sign "when couples still touch during a tense moment, which is exactly what’s happening between [them] here... When you maintain a connection to your partner during [these] times, you usually come out the other side stronger.” Well, I definitely like the sound of that!

Overall, Cobb says she sees a couple whose body language shows “that they’re feeling an attraction to each other.” That's obviously a good thing, but, as she notes, only time will really tell if what were seeing is the real thing. But in the meantime, at least we’ve confirmed their connection is fire!