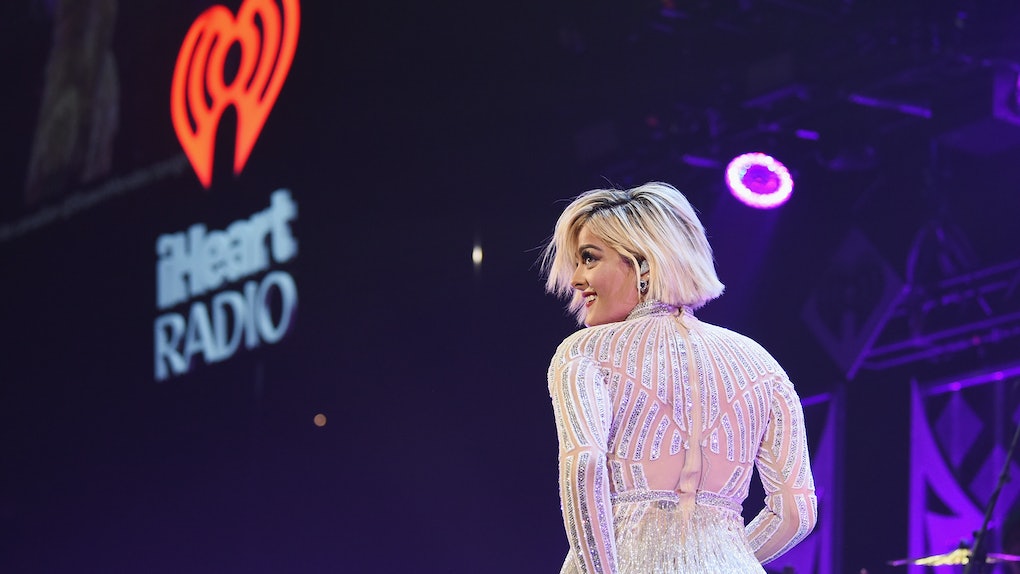 The first time I saw Bebe Rexha in concert, I was at the 2015 Warped Tour, desperately looking for shade. When I finally sat down in front of the covered stage, The “Meant To Be” singer just happened to be performing her set, which she crushed, obviously. Fast-forward to 2019, and I’m still in awe of Rexha’s killer vocals, but I’m also floored by her unwaveringly body-positive attitude. Not only does the 29-year-old take pride in her body — and encourage women of all shapes and sizes to do the same — but Bebe Rexha’s home workouts also prove that getting in shape and feeling good about your body doesn’t always have to come from a gym membership. Sure, the #fitlife might look fancy on social media, but Rexha’s here to show you that loving your body, and keeping it healthy, can just as easily be achieved from the comfort of your living room as it can from a weight room.

As someone who used to only associate exercise with the yellow-and-purple color palette that decorated the walls of my local Planet Fitness, I can vouch that social media does a stand-up job paralleling fitness with plastic membership cards. I used to think that if I didn’t work out at the gym, then the results I was looking for wouldn’t, and couldn’t come sans heavy equipment and a free-weights rack. I know now that this was both a foolish and unhealthy mindset, because health and wellness isn’t measured by how many times a week you go to the gym; it’s measured by movement, and how that movement makes you feel in your body — and Rexha’s home workout, which includes compound dumbbell movements and boxing jabs, is the perfect example of this.

On Jan. 25, 2019, the two-time Grammy nominee gave fans a behind-the-scenes peek at her workout routine: a 6 a.m. session with Jeanette Jenkins, the founder and president of The Hollywood Trainer fitness company, that packs a lot of punch with very little equipment. “The only way to workout,” Rexha captioned with a series of silly-face emojis, a nod to the artist's playful approach to the movements — aka singing "My Neck, My Back (Lick It)" seductively to the camera while she drops into a weighted split squat. TBH, the workout itself looks pretty kickass, but fitness doesn’t have to be so stiff, and I think that’s exactly the message the “I’m A Mess” vocalist wants to send.

Your workouts don’t always have to be super complex to feel the burn, either, and if someone as gorgeous as Bebe Rexha is vouching for the power of home workouts, what more do you need to be convinced? The singer-songwriter’s seconds-long clip is only a taste of what Jenkins had in store for her; the celebrity trainer also posted a video to her Instagram account to document the session, and in addition to the compound movement pairing split squats with a dumbbell curl, Rexha can also be seen practicing some boxing jabs.

The workout as a whole looks pretty fierce, and according to Rob Sulaver, founding trainer of Rumble Boxing and founder of Bandana Training, it's definitely a sequence you can perform at home sans equipment and sparring partner. “If you don’t have any dumbbells, you could do the split-squat by itself,” which can still be a pretty intense workout for your glutes and quads, Sulaver tells Elite Daily over email. Adding in a curl will work your bicep muscles, but if the combination is too difficult, Sulaver says, you can make the exercise easier by either “limiting the range of motion (aka how low you go),” or, if you’re looking for a little more, “you can make it more difficult by adding additional weight or pausing at the bottom," he suggests.

As for the boxing portion of Rexha’s routine, Sulaver says you don’t necessarily need to work with a partner. Boxing solo is called “shadowboxing,” and Sulaver tells me it’s a great way to warm up, but it can also be a very intense conditioning tool when you really focus on your technique. Though, if you’re new to boxing, Sulaver does highly recommend you work with a trainer first, to make sure you “learn the proper technique and develop good habits.”

Listen, it’s only February, and Rexha’s already making quite a few statements surrounding body positivity and wellness. For example, if you somehow missed the artist's Instagram video calling out fashion designers who wouldn’t dress her for the Grammys, the performer’s stance on the subject was flawless. Basically, Rexha said that some designers were turning down the opportunity to dress her for the awards show sheerly because she’s a size 6/8 (don’t even get me started on the audacity), and she called them on their sh*t. The "I Got You" singer said in her Instagram video,

Unfortunately, this wasn't the first time the singer has had to deal with unsolicited criticisms of her body. Back in July of 2018, Rexha posted a photo to Instagram showcasing her gorgeous curves in a killer pair of jeans, and made it very clear that, sure, she'd gained weight, but that's because she's "human" and "likes to eat" and she's not sorry about it, nor does she have to be.

Going into 2019, Rexha tweeted to fans that, even though the new year is a fresh start, the only reason why anyone should be making a resolution to work out, is to feel good and get healthy — something she, herself, is clearly excelling at. Way to lead by example, Bebes. Now excuse me while I go get my boxing gloves on.

More like this
I Tried Singing While Running Like Miley Cyrus & OMG, My Lungs
By Rachel Varina
25 Instagram Captions For Workout Pics & Being A #Boss In The Studio
By Marisa Casciano
26 Celebrity Quotes About Self-Love That’ll Hit You In The Feels
By Rachel Shatto
Stay up to date