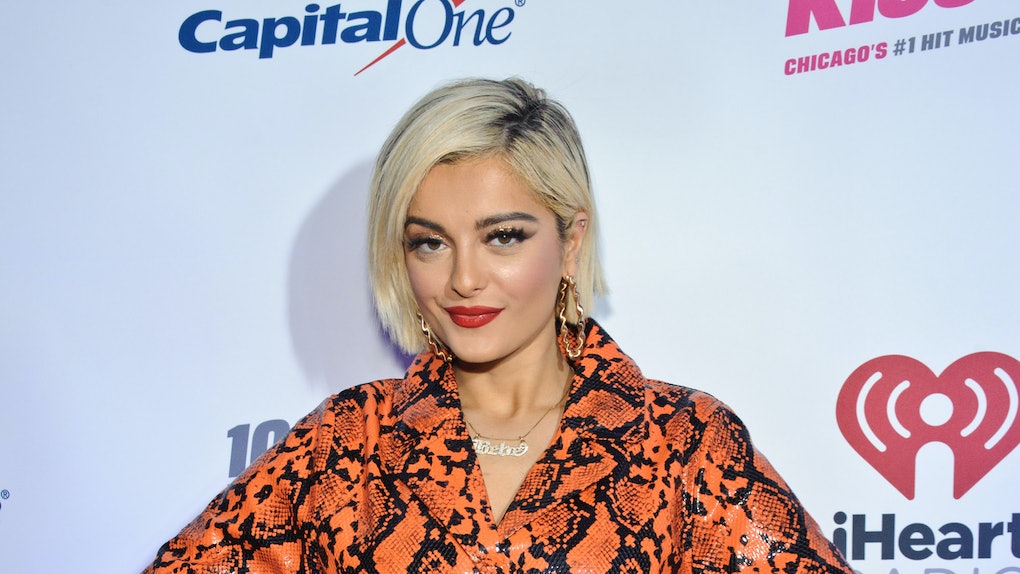 Bebe Rexha has been nominated for not one, but two Grammy awards this year, and regardless of your musical tastes, there’s no denying the recognition is well-deserved. Unfortunately, though, despite the fact that this should be an exciting time for the singer-songwriter — win or lose, just being acknowledged for her work speaks volumes — Rexha’s nominations for Best New Artist and Country Duo/Group Performance are being overshadowed by yet another fashion-industry faux-pas. Long story short, apparently some fashion designers won't make Bebe Rexha’s dress for the Grammy Awards because — wait for it — the performer is a size 6/8. The “Meant To Be” vocalist took to Instagram to respond to these designers for what seems to be their total rejection of women who don't fit into typical runway sizes, and needless to say, Rexha's video is worth watching, and her message is worth spreading.

On Jan. 21, 2019, Rexha uploaded a video to her Instagram account to clue fans in on the situation. Dressed in a black hoodie with a gold nameplate around her neck, it felt fitting that the artist wore minimal makeup as she communicated the dilemma to her social media followers, because the best terminology I can think of to describe her delivery would be something along the lines of unfiltered and raw.

To set the scene, Rexha began the video by stating that she’s been nominated for her first two Grammy awards — an experience that she described as “the coolest thing ever.” Once she got the news, she said in the video, like many other artists who attend these sorts of awards shows, Rexha had her team reach out to a bunch of different fashion designers to custom-design her dress. “So I had my team hit out a lot of designers, and a lot of them do not want to dress me because I’m too big,” the “Say My Name” singer explained. “Literally, like, I’m too big.”

Rexha could have then easily went off on a long rant about this whole situation, and honestly, I don't think anyone would have blamed her for it. Instead, though, the singer recorded this video in defense of not just her body, but of all women of different shapes and sizes who’ve ever been made to feel less than empowered because of a number stitched into the tag of a dress. Rexha continued,

True beauty knows no size, and Rexha made that very clear in the caption accompanying her Instagram video, along with the notion that fashion designers and clothing labels should dedicate their efforts to honoring and representing women of all shapes and sizes, rather than tearing them down and excluding them just because they don’t fit the typical (and really, for the most part, unattainable) runway mold.

“If you don’t like my fashion style or my music, that’s one thing. But don’t say you can’t dress someone that isn’t a runway size,” the 29-year-old singer wrote. “Empower women to love their bodies instead of making girls and women feel less then by their size. We are beautiful any size! Small or large!”

What makes Rexha’s experience even more ludicrous is that, back in January of 2018, Racked reported that, per data released by Plunkett Research, the average American woman wears a size 14 or above. So why, then, are fashion designers still refusing to showcase anything but runway sizes?

Rexha doesn’t mention the specific labels who’ve turned her away, but it’s no secret that the fashion industry at large has a bit of a reputation for lacking in inclusivity. Back in November of 2018, for instance, Victoria’s Secret’s chief marketing officer, Ed Razek told Vogue that while VS does make an effort to be inclusive in the sizes it offers, the brand had no plans to televise women actually wearing those sizes in the 2018 Victoria's Secret Fashion Show, nor does it seem to have such plans in the near future, either. Razek told the glossy,

We invented the plus-size model show in what was our sister division, Lane Bryant. Lane Bryant still sells plus-size lingerie, but it sells a specific range, just like every specialty retailer in the world sells a range of clothing. As do we. We market to who we sell to, and we don’t market to the whole world... We attempted to do a television special for plus-sizes [in 2000]. No one had any interest in it, still don’t.

Evidently, runway designers aren’t the only ones leaving curvy women out of their vision. Wrapping up their fashion week coverage in February of 2018, the deputy editor of Fashionista.com, Tyler McCall, called for more diversity in street style, too:

By and large, street style galleries across the internet are dominated by the same thin, cis, white women, with a few influential women of color sprinkled in, and, very rarely, maybe a plus-size woman. This is especially egregious when you consider that street style, by definition, is meant to represent the hundreds of diverse people attending fashion shows around the world. Where are the plus-size women? I tweeted about this all the way back in 2014, and I still don't have an answer.

Rexha’s video brings attention to a very real, very prevalent issue, not to mention the fact that several female celebrities — including names like Bryce Dallas Howard, Octavia Spencer, Ashley Graham, Hayden Panettiere, Khloé Kardashian, and even Beyoncé — have been and are regularly subjected to this kind of bias. It’s unfortunate, and unfair, to say the very least, but the fashion industry needs women like Rexha to put it on blast, because women should be uplifting other women, not tearing them down over a dress size.

More like this
26 Celebrity Quotes About Self-Love That’ll Hit You In The Feels
By Rachel Shatto
Will BTS' Camping Collection Restock? Here's What To Know About The Helinox Collab
By Marisa Casciano
10 Justin Bieber's "Lifetime" Lyrics For Romantic Captions & Pics With Your Darling
By Kelly Pau
Stay up to date