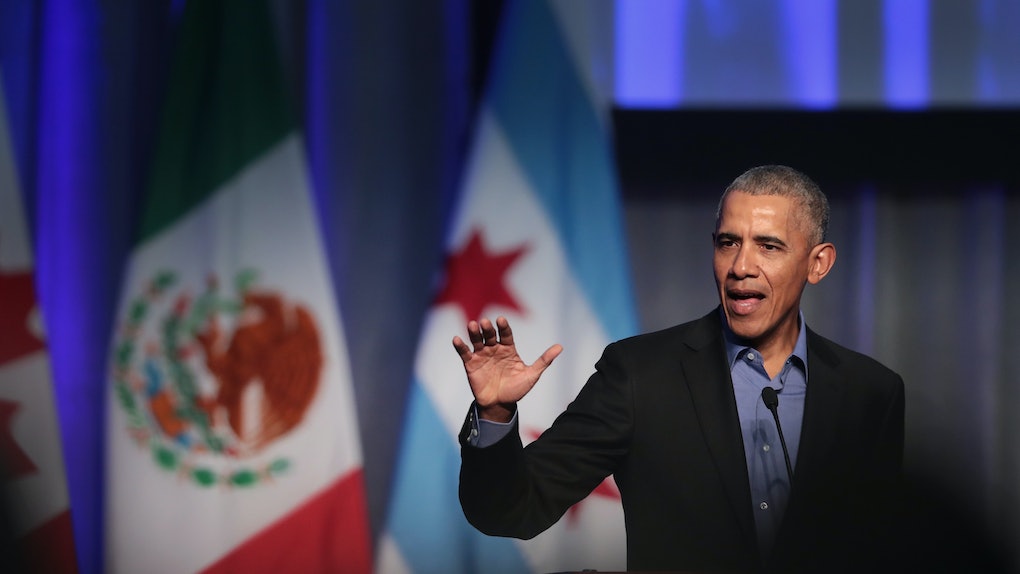 On Friday, Dec. 29, former President Barack Obama shared a string of tweets about good news to help guide us all as 2017 comes to a close. "As we count down to the new year, we get to reflect and prepare for what’s ahead," Obama's Friday morning tweet thread began. "For all the bad news that seemed to dominate our collective consciousness, there are countless stories from this year that remind us what's best about America."

Amidst the depressing, overwhelming, stressful, and downright complex stories that flooded the news cycle, Obama offered up glimpses of hope. In his thread, he highlighted positive stories that probably didn't make it into news feeds, but are no less important. Among the stories he shared were of a wedding planner from Houston who created a volunteer effort for Hurricane Harvey victims, an NFL player who donated his salary to create education equity, and a ten-year-old who's on a mission to help the homeless.

Obama ended the thread by honoring those who continue to work for good, and encouraging all of us to carry that into the next year. "All across America people chose to get involved, get engaged and stand up. Each of us can make a difference, and all of us ought to try. So go keep changing the world in 2018," he wrote.

Obama's positive end-of-year message wasn't lost on users on the platform. The tweets immediately went viral, garnering thousands of retweets and likes within minutes. (ICYMI: Obama also stakes claim to the most popular tweets, ever. As in, they made history.) Users heaped on praised for Obama's thread, thanking him for the inspiration.

The inspiring thread came at a time when Obama's successor, current President Donald Trump, has been taking aim at everything from the U.S. Postal Service to Vanity Fair on Twitter. Ironically, Trump just a few hours prior had compared his own approval rating to Obama's. "While the Fake News loves to talk about my so-called low approval rating, @foxandfriends just showed that my rating on Dec. 28, 2017, was approximately the same as President Obama on Dec. 28, 2009, which was 47%," tweeted Trump on Friday.

The thread also came on the heels of a Gallup poll, published Thursday in Politico, that found Obama led Trump for the title of the America's most admired man.

The contrast between the two presidents' social media sharing wasn't lost on people, either. "Amazing how a leader talking about the greatness of others instead of fake poll numbers and fights with Amazon," tweeted Tony Posnanski.

"Once again, we are shown what a true leader does and says. Instead of tearing people down, this amazing man is reminding us of the good," tweeted another user.

In fact, several users commented with pleas for Obama to come back, reigniting the hashtag #ComeBackBarack. (Some even used hilarious gifs to get the point across). "You were a much better president and person than the man currently occupying the White House," wrote Khary Penebaker, a member of the DNC.

Obama's message capped off a tumultuous year. Among destructive hurricanes (several of them), apocalyptic wildfires, policy changes, political feuding, human rights violations, and a movement again sexual misconduct, there's been more than enough to fill 280 characters at every moment. So bringing some light to the end of 2017 was a welcome respite for many. As one user replied, "Thank you for being a ray of positivity in a dark world."

As 2018 approaches, we might all take a bit of Obama's advice and pause for a moment to honor all the good that happened in 2017. And if you're feeling inspired — like I am — think about how we can create more of that in 2018.