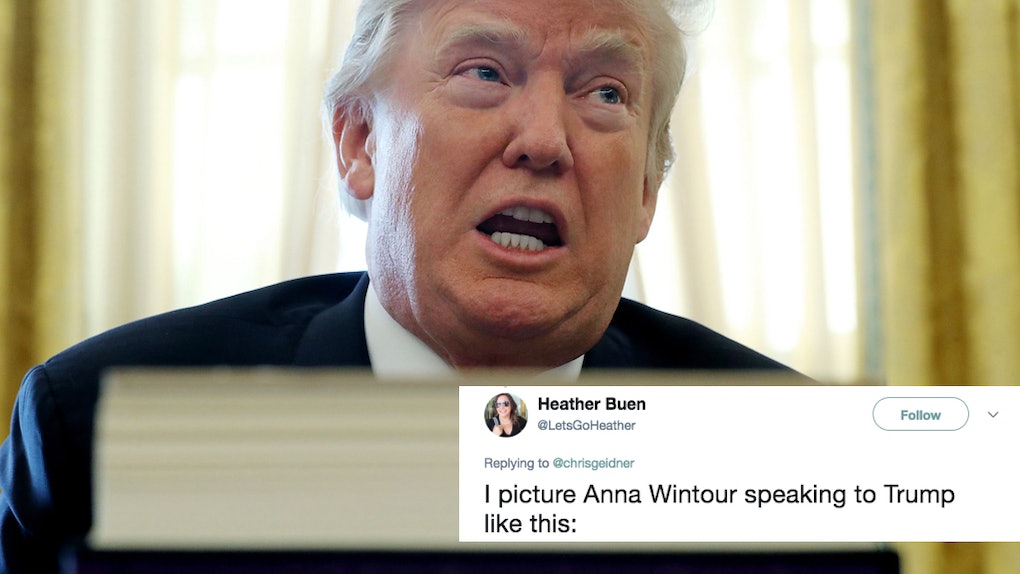 In the midst of a 10-day holiday trip to Mar-a-Lago, President Donald Trump took time out of his busy golf schedule to, what else, tweet insults at someone he doesn't like. This time, he took aim at the incomparable Anna Wintour for what he determined to be an unnecessary apology to Hillary Clinton for an ill-advised video. The problem? The video was posted by Vanity Fair, and Wintour is, quite famously, the editor-in-chief of Vogue. So, of course, the tweets about Trump's Anna Wintour insult are gold.

On Thursday, Dec. 28, Trump took time out of his busy schedule of golf, golf, and more golf to tweet about Vanity Fair. He wrote, "Vanity Fair, which looks like it is on its last legs, is bending over backwards in apologizing for the minor hit they took at Crooked H. Anna Wintour, who was all set to be Amb to Court of St James's & a big fundraiser for CH, is beside herself in grief & begging for forgiveness!"

Aside from the near-inscrutable tangle of language (for example, the "Amb to Court of St. James's" is referring to the U.S. Ambassador to the United Kingdom), there's a glaring problem with his complaint: while Wintour does openly loathe Trump, and she is the artistic director of Vanity Fair's parent company, Condé Nast, she is not the editor of VF, and it's doubtful that she had a hand in a quick holiday-week video. (And it's also sad. I mean, dude, it's almost 2018. Give the "Crooked Hillary" thing a rest.)

And anyways, it's an odd thing to insult. The apology to which Trump is referring is the result of a poorly considered video from Vanity Fair, in which they (kind of jokingly) advise former presidential candidate Hillary Clinton to do anything else but run for office again — including taking up volunteer work or even knitting. The video, which admittedly flirts with sexism and ageism, caused an uproar, and the surge of anger even led the writer behind the "knitting" joke, Maya Kosoff, to leave Twitter for the foreseeable future due to harassment, according to Nylon.

After the inevitable backlash, Vanity Fair apologized through a spokesperson. According to the BBC, Vanity Fair spokeswoman Beth Kseniak said in a statement about the video, "It was an attempt at humor and we regret that it missed the mark." But Trump, supposedly, didn't think the apology was necessary, hence the furious complaint which he probably wrote somewhere on the back nine.

Look. I get it. Who among us hasn't wielded their unparalleled power to mistakenly target the wrong female media giant for apologizing for publishing a nasty video about your enemy? Who among us??

So of course, Twitter is going to town on it.

To be fair to the man who is supposed to be running the country, Wintour is, once again, the artistic director of Condé Nast, which owns Vanity Fair. So while it's a stretch, it's doable if you're flexible.

(I mean, @areta does make a good point.)

Before you try to come for someone like Wintour, you should probably reconsider.

After all, Wintour could probably eat you alive.

(His 2012 support for Wintour was very real, and perhaps gives us a window into his mind.)

You will be pleased to know that there is a whole sub-genre of these tweets dedicated to Miranda Priestly.

It's perfect in so many different ways: Priestly is Wintour in the Devil Wears Prada universe. Plus, Trump has also gone after Meryl Streep in the past, calling her a "Hillary flunky" and "one of the most over rated actresses in Hollywood" after the 2017 Golden Globes.

So it is delicious to see the two women come together, if only by the powers of social media, to mock our president's dumb tweet.

Look, I'm not here to be one of those people who tweets, "Did you forget that she's at Voooooogue?" Because Wintour does have considerable power over Vanity Fair as Condé's artistic director. But it's a weird thing to tweet, and there are a lot more things Trump could be doing with his time.

So, in the immortal words of Hillary Clinton, who, as far as we know has not yet taken up knitting: Delete. Your. Account.