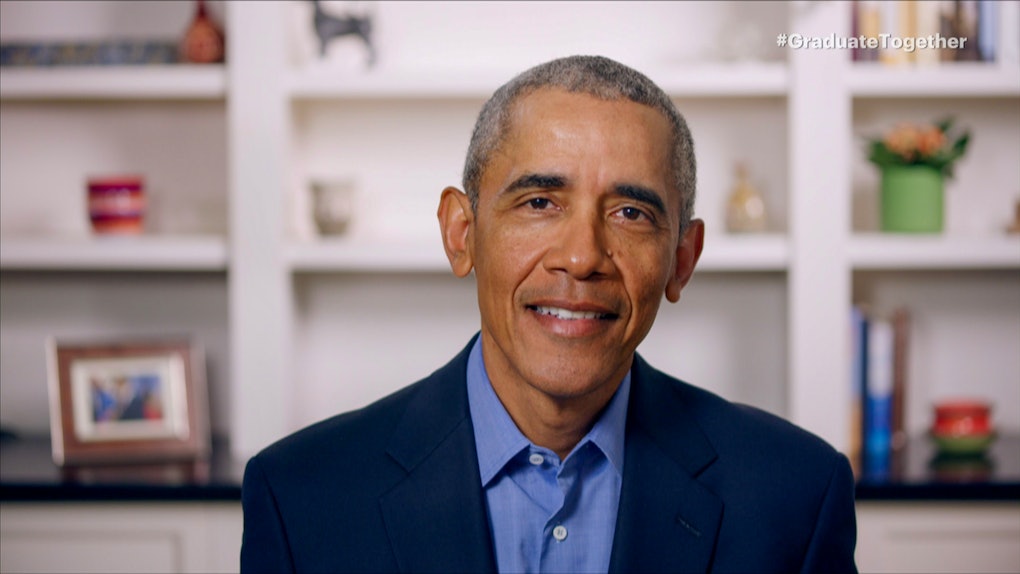 As the 2020 presidential campaign came to a close, former president Barack Obama took to social media to encourage voters ahead of Election Day. Likely making the day of one such person who headed to the polls, Barack Obama congratulated a first-time voter on Twitter with a retweet and a very important message. In a short but meaningful tweet, Obama shared a must-hear message for voters, especially young people, heading to the polls on Election Day.

On Monday, Nov. 2, Obama gave a special shoutout to Dewey Foley, a young first-time voter on Twitter. In Foley's original tweet, which he posted while voting early on Oct. 24, he shared it was his first time casting his vote, and in reply Obama wrote, "Congrats on your first vote, Dewey! It will make a difference."

Foley, who is the son of WWE legend Mick Foley, had originally posted a photo of himself along with a more detailed caption about his first time voting. In his message where he also encouraged others to vote, Foley shared: "First time voting, in the books. In a state where my vote could make a difference. It could've taken 4 minutes, 4 days or more. The next 4 years of our country are at stake, and the consequences could last a lifetime. VOTE."

While Obama's reply might seem short and sweet, it's always good to know your vote can make a difference, and when that message comes from a former POTUS, well, you actually believe it.

It isn't surprising that Obama is urging young voters to cast a ballot for the 2020 election, given the low turnout rate for the demographic in the past. According to the United States Census Bureau, only 40% of eligible 18-to-24 year-olds voted in the 2016 election, and only 51% of eligible voters were registered. For the 2020 election, 40% of the electorate is made of Gen Z and millennials, according to a tweet from CNN reporter Rachel Janfaza. With record early voting turnout for the 2020 election, the percentage of young voters who turn out to cast their ballots in 2020 could top the 40% from four years ago — especially with public figures like Obama supporting the cause.

If you want to make your voice heard on Election Day, you can use this polling locator to find your local polling place, because every vote counts, and as Obama says, "It will make a difference."

More like this
These Tweets & Memes About Matt Gaetz's Venmo All Make The Same Joke
By Cianna Garrison
In 'Riverdale' Season 5, Toni Topaz Is The Black Superwoman Without A Cape
By Erika Hardison
The More Contagious B-117 COVID Variant Is Now The Most Common Strain In The U.S.
By Rhyma Castillo
Stay up to date