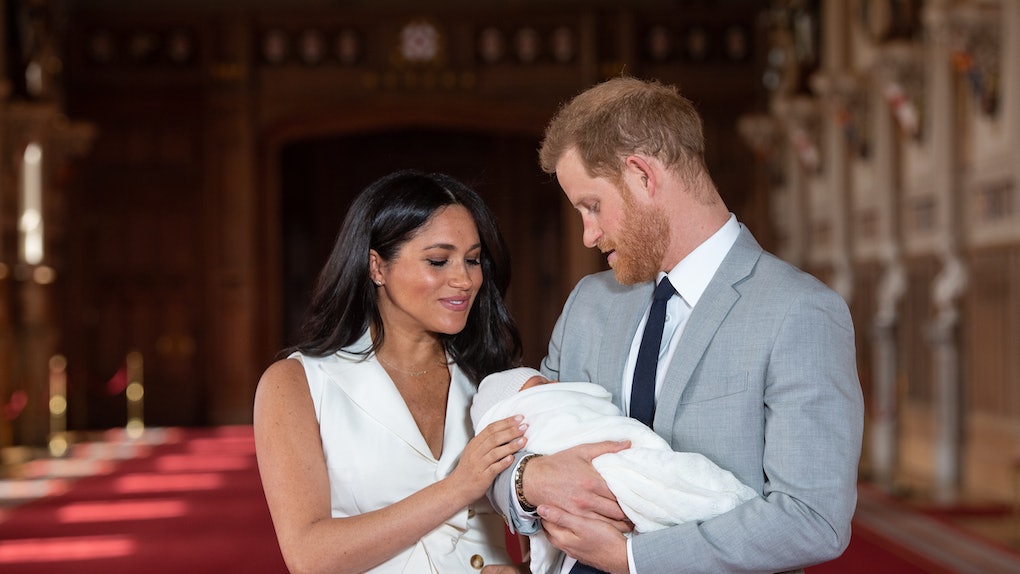 Baby Archie's Private Christening Is Causing Some Royal Drama, According To Reports

Believe it or not, it's already been almost two months since Meghan Markle and Prince Harry welcomed their son, Archie Harrison Mountbatten-Windsor, into the world. The royal couple has been fairly private since his birth on May 6, only revealing small glimpses of the newborn here and there. It looks like the secrecy is continuing with Archie's christening, because the Duke and Dutchess of Sussex are breaking tradition and keeping the event to themselves. As you could imagine, Baby Archie's private christening is causing some royal drama for quite a few reasons.

I'll take it from the top. After flip-flopped plans, Baby Archie is scheduled to be christened on Saturday, July 6, at Windsor Castle. According to the Daily Express, the event was originally planned for Friday, July 5 — but the couple changed the date to accommodate Prince Charles. However, that apparently wasn't the *best* move, because Queen Elizabeth and Prince Phillip still won't be able to make it. Apparently, the great-grandparents are spending the weekend in Sandringham, per the Daily Express. Elite Daily reached out to Buckingham Palace for comment on the Queen not attending Archie's christening, but did not hear back by the time of publication.

So, yeah, that's the first part of the reported drama. Don't worry, though: There's a lot more where that comes from.

On top of the christening's date change, Markle and Prince Harry chose to make the event private. The couple has broken royal tradition in the past, so this isn't that much of a surprise — but it's still a change of pace for the royal fam. For reference, Prince William and Kate made their kids' christenings public, which won't be the case with baby Archie. Sorry, y'all.

A christening isn't the only thing that Markle and Prince Harry are keeping private, though. The royal couple is also keeping the names of Archie's godparents under wraps, which is apparently causing a ton of drama in the royal community. Apparently, baby Archie's godparents aren't celebs, and they'd rather not become celebs after the christening. Therefore, their names won't be revealed, which makes total sense.

Unfortunately, the whole ordeal isn't as simple as it sounds. According to Richard Palmer, a London-based royal reporter for the Daily Express, Markle and Prince Harry are "in breach of a legal requirement" to reveal the names of Archie's godparents (yikes). Apparently, baptism details about royal babies are usually recorded and available to the public, but that won't be the case with baby Archie. Elite Daily reached out to Buckingham Palace for comment on keeping the godparents' names private, but did not hear back by the time of publication.

So, um, it looks like the royal community isn't too thrilled with Markle and Prince Harry right now. Between the couple's decision to completely privatize the event and hold it on a day when the Queen can't make it, they're breaking royal tradition again. But you know what? It's their lives, so can they live?

Regardless, baby Archie will be christened on Saturday, July 6 as planned, and everyone who's curious about how it went will have to wait for the couple's photographer to release photos of the event.