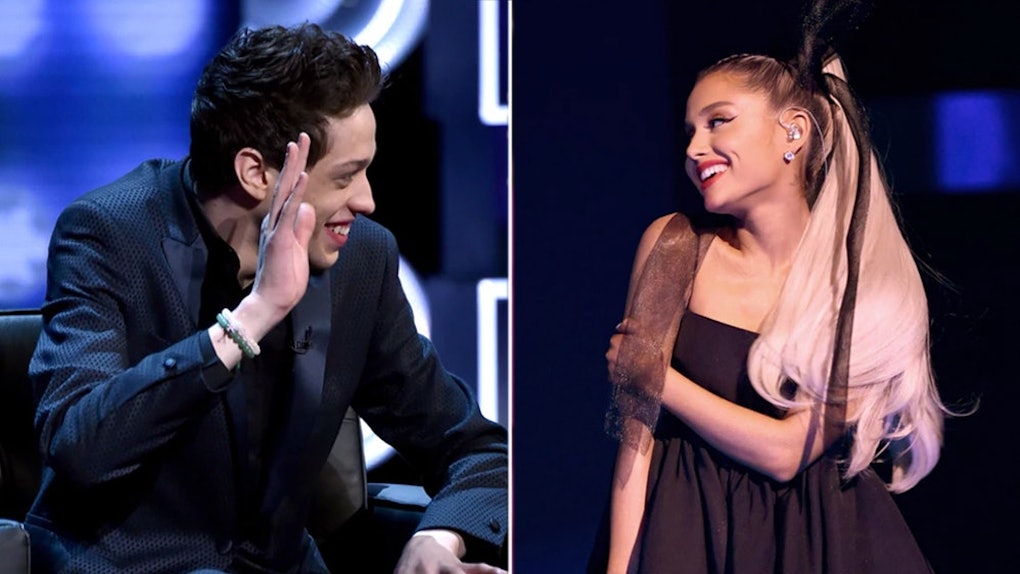 Although the Ariana Grande and Pete Davidson saga has been undeniably fast-paced, it's nothing short of wildly romantic. Let's review an abridged version of their love timeline, shall we? After supposedly meeting on SNL back in 2016, fans started to suspect they were dating when they were spotted snuggling at an SNL after-party in May 2018. Later on, fans began noticing some Instagram flirtation between the two, and finally, they posted a photo together, which pretty much forced the cat out of the bag. Their relationship was officially confirmed, at long last — and shortly after, they got engaged. Now, Ariana Grande's "Pete" tattoo on her ring finger has totally changed the game. It seriously takes commitment to a whole new level.

On Friday, July 13, Grande fans spotted something totally new about her look, and it's getting a lot of attention. According to Cosmopolitan, Grande's New York City-based manicurist, @Nailswag, posted a photo of Grande's manicure on Instagram, which led fans to noticing a new cursive "Pete" tattoo right above Grande's engagement ring, in the middle of her left ring finger. Say whaaat? It's unclear as to how long the singer has actually had this new ink, but it's yet another profession of her undying love to the goofy SNL comedian. *Cue every single sappy love song you can think of at the top of your head.*

Now, let's just take a quick look at the photo. Can you see the teeny tiny "Pete"? It's small, albeit, but you can spot it if you look really, really close. In all honesty, it's pretty and dainty, and I kind of love it.

You're probably well aware of the fact that this isn't the first tattoo either Davidson or Grande has gotten to commemorate their love. In fact, the two started out getting matching tattoos, and it was so freaking cute. Back when their relationship was still unconfirmed, fans noticed they had the same exact cloud tattoo. Davidson had it on his left arm, and Grande's was on her left hand. I'm not entirely sure what the cloud's significance is — or if they simply just wanted to get matching tats — but it's adorable and I wholeheartedly support it.

Next, Davidson got not one, but two tattoos in honor of the "Side to Side" singer. Back in May 2018, the comedian got Grande's Dangerous Woman bunny ears behind his ear, as well as Grande's initials, AG, on his finger. It was a pretty major step in their relationship, but as Davidson is obviously pretty big on getting inked, I suppose it wasn't a huge deal for him. Again, I'm totally in favor of each of these ink-based love professions, because they're really cute.

Just before getting her latest "Pete" tat, fans also noticed that Grande got a tattoo with the number 8418 on her left foot. This specific number honors Davidson's late father, Scott Davidson, who died in the September 11, 2001, attack on New York City. The number, 8414, was Scott's New York City Fire Department badge, and Davidson has had the same number inked on left arm for a long time. The fact that she got it had to have been pretty meaningful for both of them.

Grande and Davidson's relationship has been fast n' furious in the best way possible. The fact that the singer just got a "Pete" tattoo definitely brings their relationship up yet another level, but they both seem incredibly happy about it. Nobody has ever gotten my name tattooed onto their finger, so it's safe to say that this is the epitome of romance. BRB, crying forever.