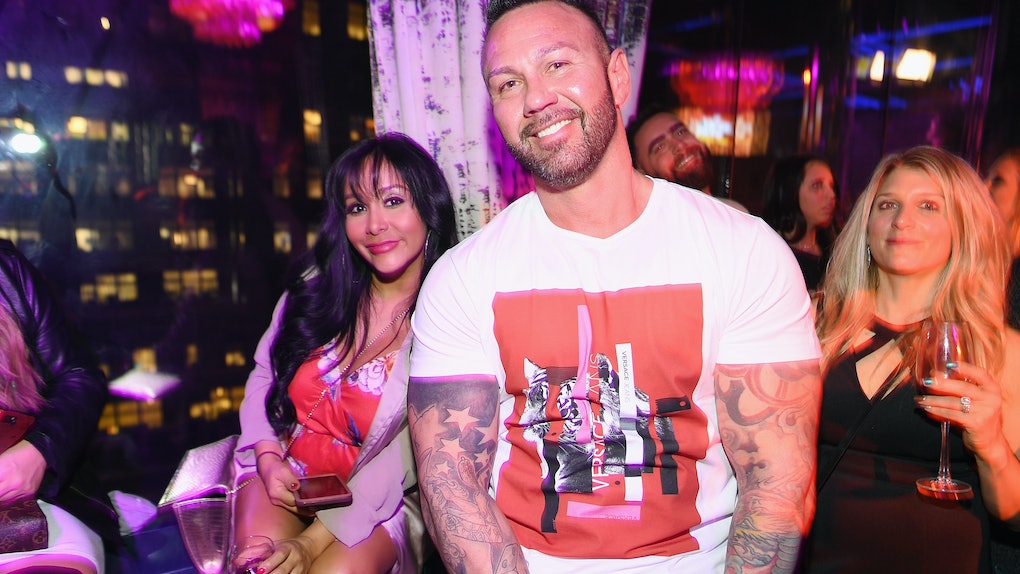 Nicole "Snooki" Polizzi and Jenni "JWoww" Farley have been friends for almost a decade, since the first season of Jersey Shore premiered in 2009. And JWoww's long-time partner Roger Mathews has been a part of the group for nearly as long. Mathews has been a part of all the on-screen drama across multiple MTV series, from Jersey Shore to Snooki & Jwoww to Jersey Shore: Family Vacation. On camera, it seems like the the friends are close, but Mathews' recent comment on Snooki's Instagram has fans wondering if Snooki and Roger really are friends. To understand what's going on, here's what you need to know about Snooki and Roger's relationship over the years.

JWoww and Roger first announced they were splitting up back in September, but their separation drama escalated to another level after police officers reportedly visited the couple's home on Dec. 13 in response to a reported civil matter, which ended with JWoww getting restraining order against Mathews. Mathews posted an Instagram video with a caption saying she "gets so emotional and irrational in her anger," and placing much of the blame for their issues on her.

I've decided to post this video because Jenni's intentions were to never keep the kids from Roger. She is fighting for him to be in their lives and never once tried to take them away ... I know my sis and she is NOT the person Roger is painting her out to be. So congratulations, you gave him what he wants. Your attacks and bullying.

But, Matthews left everyone questioning how close everyone is with his comment in response to Snooki:

According to Mathews, Snooki hasn't spent a single night at his home in eight years. This accusation has fans confused, since Snooki and Jwoww have spent years filming multiple series together as the cutest besties. Snooki even once told Jwoww, "We are forever, my love" in a supportive Instagram post. But, even though Snooki and Jwoww are close, Snooki and Mathews have always had a more strained relationship.

Snooki and Mathews spent a lot of time interacting during the four seasons of Snooki & Jwoww, which aired on MTV 2012-2015. The series showed Snooki and Jwoww growing up from their Jersey Shore partying days, with both of them becoming wives and moms over the course of the show. Snooki was privy to a lot of the ups and downs of Jwoww and Mathews' often explosive relationship as they figured out how to reconcile after their many fights and stay together. As Jwoww's supportive best friend, Snooki often butted heads with Mathews over how he treated Jwoww.

In the Season 1 finale of Snooki & Jwoww in 2012, Snooki and Jwoww swapped boyfriends for the night, and it gave Snooki and Mathews the chance to get to know each other better. In the episode, Mathews said, "This is gonna be an interrogation. But I kind of welcomed it, because there's a side of me Nicole has never really gotten to see." Over their dinner Snooki asked Mathews why he and Jwoww fight so much, and he said that it was often because of the same three things: "the insecurities, the mistrust, and the lying."

Even though Snooki has always seen Jwoww's side of things, this dinner gave her the chance to get a little closer to Mathews. During the dinner, Mathews explained his side of his relationship with Jwoww and said:

I've heard you say those things: 'Why is he so mean to her?' And I am mean. But there's a reason behind it. I'm hurt. She hurts me because she does these things that I would never do to her. And you just see it kind of one-sided because after that phone gets hung up, then you see your best friend lay down and star crying. But you're not seeing the hurt and the pain that I feel.

Afterwards, Snooki seemed to have gotten closer to Mathews. She said in the episode, "Going into this i'm obviously Team Jenni, but then after talking with Roger I feel like I understand Roger and why he acts the way that he acts."

This Snooki-Roger hangout was six years ago though, and based on the recent fight between Snooki and Matthews, it seems like in that time Snooki has gone back to Team Jenni.

Elite Daily previously reached out to Snooki and Roger's teams for comment on this story, but both declined to comment.