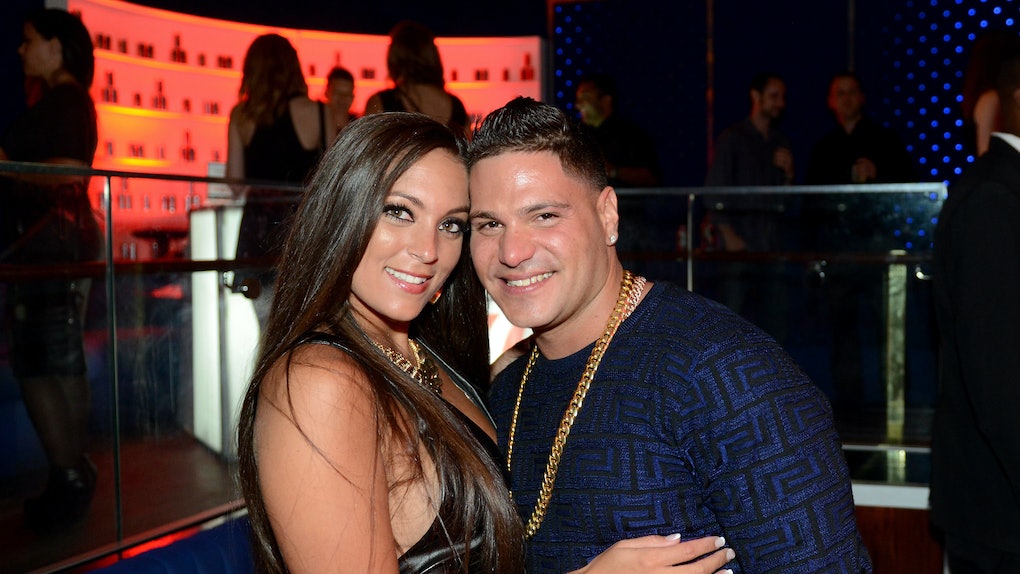 Are Sammi & Ronnie Friends After 'Jersey Shore'? Here's What They're Up To In 2017

Let's take it back to 2009, shall we? "I Gotta Feeling" by the Black Eyed Peas was constantly blasting on the radio, Avatar was all the rage, and a pop culture phenomenon called The Jersey Shore came into our lives. We can still hear faint echoes of "cabs are here!" if we listen real close, and we'll never forget the lifestyle that is GTL. We'll also always remember the bonafide prom king and queen of the MTV hit: Sammi "Sweetheart" Giancola and Ronnie Magro. Are Sammi and Ronnie friends after the madness that was Jersey Shore? The former flames have moved on since their reality TV romance blossomed at that illustrious Seaside Heights beach house.

Just because we're in 2017 doesn't mean Jersey Shore is out of our lives for good. Nostalgia, throwbacks, and reboots (even of things that haven't reached their ten year anniversary) are king when it comes to entertainment nowadays, so naturally a revival of sorts was on the way. In addition to MTV's updated Floribama Shore installment of the franchise, the network recently announced that the OG gang is returning for 2018's Jersey Shore Family Vacation. Get ready, indeed. We already feel a phantom hangover coming on just thinking about this.

Everyone’s asking why Sammi’s not doing it. You have to ask her that. I’m not gonna speak for her. But Sammi is just in such a happy place that I feel like she doesn’t want to jump back into that drama if it does happen.

She went on to explain just how emotionally taxing filming can be, and perhaps Sammi isn't here for that at this point in time:

It took a toll on you. It was very emotional. And being that there was a lot of Ron and Sam drama when we did film, it was just really hard on both of them. So I just think she doesn’t want that anymore.

We get it. Sammi is in a committed relationship right now, so why jeopardize a good thing by hanging out with an ex boyfriend in a highly dramatic situation? Sammi's currently dating Christian Biscardi and even recently brought her beau to Deena's wedding.

Good for you, Sam! And glad to see Vinny approves?

Sammi and Ronnie ended their relationship back in 2014 — two years after Jersey Shore wrapped — but it appears they're on friendly terms even if they've gone their separate ways. "They have both moved on — the show was so long ago now," Jenni Farley told In Touch last month.

Sammi isn't the only one who's found love post Jersey. Ronnie is also in what he told Us Weekly is a "serious" relationship and revealed he's ready to "settle down." Times they are a-changin,' guys. Ronnie struck up a romance with Malika Haqq on E!'s Famously Single, but the TV personality couple ended things earlier this year. Looks like Ron's single days are in the past now.

Now that most of the Jersey Shore cast has abandoned late night clubbing and one night smushes for adult responsibilities like marriage, kids, and commitment, it will be interesting to see what this next TV chapter in their lives will bring. Yes — we'll miss Sam longingly calling out for "Raaaahhn," but if we can get a little T-shirt time, Snooki one-liners, and some Sunday night dinner, Jersey Shore Family Vacation is going to be one fist-pumpin' good time.