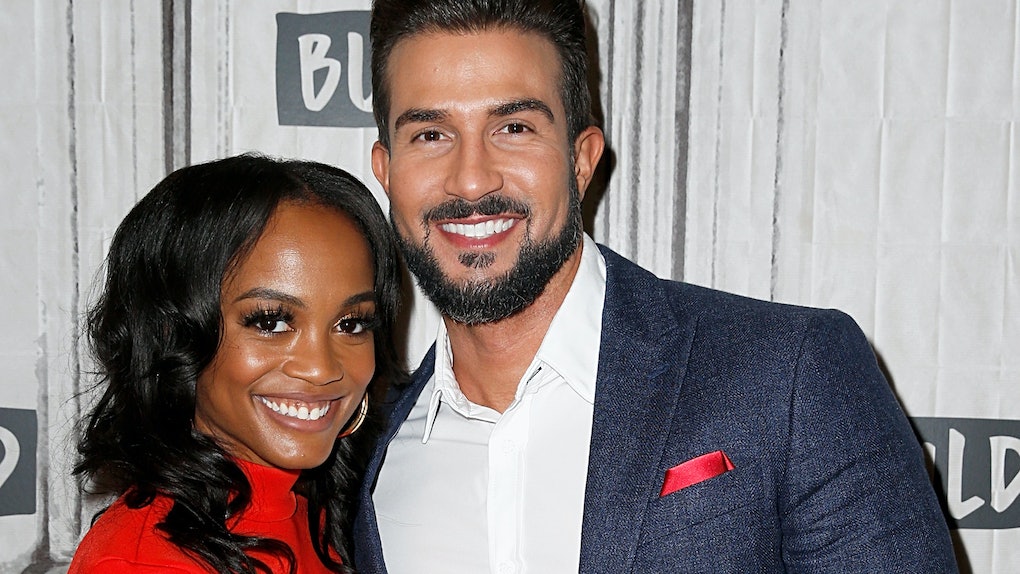 Are Rachel Lindsay & Bryan Abasolo Divorcing? She Shut Those Rumors Down

Fear not, Bachelor Nation, because the rumors Rachel Lindsay and Bryan Abasolo are divorcing are totally false. During a Nov. 17 interview with Us Weekly, the Season 13 Bachelorette opened up about her long-distance marriage with Abasolo and said — while they may live on different coasts — there def isn't "trouble in paradise." As she explained, "What people don't realize is we were pretty much long-distance before [we got married] with all the traveling that I was doing pre-COVID. I didn't actually have a place somewhere else, but I was never at home because I was always traveling. And so for us, you know, we know how to work this out and navigate it, and obviously we have an end goal in mind. This is not a forever situation."

According to Lindsay, she deals with "so much speculation about whether or not [they] were still together" because they don't post pics together on social media as often as fans would like. "I don't want to be on social the whole time [we're together]. Who am I doing that for, you? No, that's not for us," she said. "We're trying to, like, soak up all the time that we can have with one another." Fair enough!

Last month on Abasolo's Dr. Abs Healthcast podcast, Lindsay said she and her husband "have a timeline for ourselves," even though Abasolo is currently focused on his Miami-based chiropractor business and Lindsay is based in L.A. "I didn't move to L.A. because I just love the city," Lindsay told Abasolo. "You're focusing on your practice and building it to a place you want it to be, and I am here in L.A. working for Extra and doing other things, and we're doing this to eventually bring ourselves together."

During her time on The Bachelorette, Lindsay said she never wanted to "put her career over her husband," but as she told Abasolo on the podcast, "...the thing is, I'm not putting my career over my husband. I'm putting my family first. Part of that is putting us in a position to succeed and put our family in the best position." Abasolo agreed, telling Lindsay, "For me, I want you to go do your thing in L.A., I want you to be as successful as possible. You're killing it right now, and I love it." Me, too!

However, Lindsay has admitted their bicoastal marriage can be a bit challenging. "I love to work. I'm addicted to working, clearly, and rather than holding that against me, Bryan loves it and he's super supportive of it," she told Us Weekly in August 2020. "He always tells people the main thing that he's attracted to … is my ambition. So we have an understanding, we talk it out. It's not always easy, but he's supportive of what I'm doing and I'm supportive of what he's doing." She jokingly added, "If we can survive the Bachelorette and having everybody against our relationship … we can do anything. We got this now."

Keep doing your thing, you two.