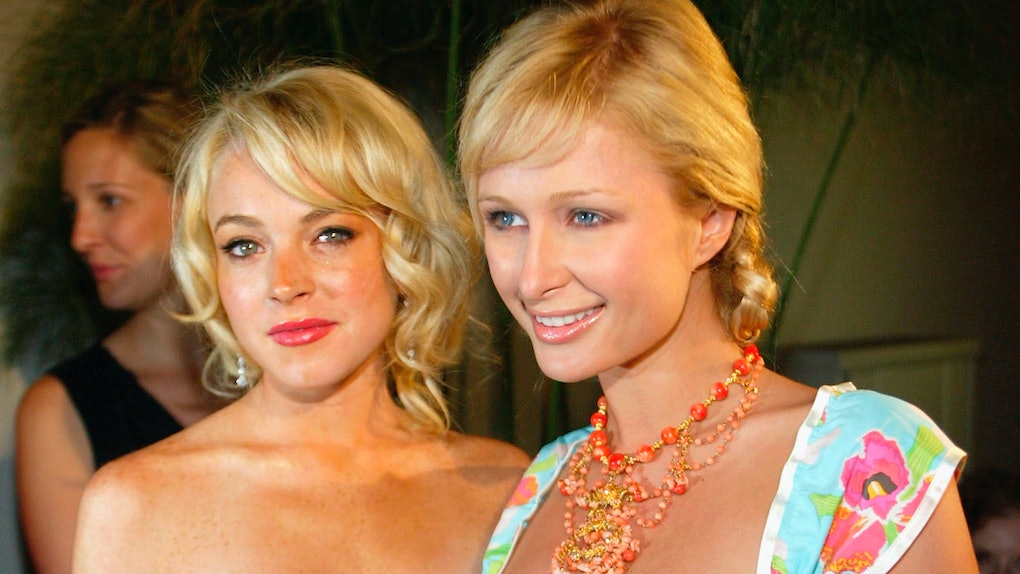 Are Paris Hilton & Lindsay Lohan Friends? Paris Just Revealed What Happened In Their Past

Back in 2006, three names ruled over the world of pop culture: Paris, Britney, and Lindsay. No last names needed. The three are now emblematic of one of the most extreme eras of paparazzi culture, and each woman has spoken about how the constant cameras and tabloid headlines led to some serious darkness in their lives at the time. Photos of the trio are still iconic among the celebrity-obsessed, and one of the most revered is a 2006 shot of the three in a car together after a night out. At long last, Paris Hilton is telling the story of that picture, and it also answers the question of are Paris Hilton and Lindsay Lohan still friends. Let's just say that Paris did not hold anything back at all in this new interview.

Paris Hilton appeared on Andy Cohen's SiriusXM radio show on Wednesday, and finally told the story of that mega-famous 2006 photo of herself leaving a nightclub with Lindsay Lohan and Britney Spears, which could basically be put in the dictionary next to the definition of "mid-2000s." At the time, Lindsay Lohan was coming off of being the reigning teen queen of the box office, Britney Spears had risen to a whole new level of pop music glory after releasing "Toxic," and Paris Hilton was inventing the hyper-celebrity socialite model of fame that would go on to be co-opted by the Kardashians. But although the three women appear friendly in those iconic car photos, the real story reveals the truth.

Paris Hilton told Andy Cohen that she was actually just out with Britney Spears that night, and the two were surprised when Lindsay Lohan chased after them and squeezed into Hilton's car at the end of the night:

Well, Britney and I went out for the night ... [Lindsay] totally party crashed. We were all at the Beverly Hills Hotel, at the bungalows at an afterparty and Britney and I wanted to leave to go home and then she started chasing us... and then squeezed in the car. It was literally a two-seater SLR. She just squeezed in and I didn't want to humiliate her in front of all the paparazzi and be like "Get out of my car," so it was like whatever.

Paris said she drove Lindsay back to her home with herself and Britney, telling Cohen that she and Britney often had slumber parties at the time. She said that herself and Britney just went to bed when they got to Paris' house, and then she does not know what Lindsay did, guessing that she may have called a cab to go out to another party.

So that is the story of the night. But how does Paris Hilton feel about the other two women now? She said that she still loves Britney Spears even though she is unable to see her very often, but she made it clear that she is still not a big fan of Lindsay Lohan. When Andy Cohen asked about their relationship, Paris implied that Lindsay has a negative energy:

Back in the day we were friends, but [she's] just one of those people that I don't really trust, and I only like to be around positive energy and good people. Good vibes only.

Check out the interview clip for yourself below:

I guess this means that we should not expect to see Paris Hilton making an appearance on Lindsay Lohan's upcoming reality show! Oh well, we will always have that iconic photo to remember the pop culture holy trinity.

More like this
I Tried Singing While Running Like Miley Cyrus & OMG, My Lungs
By Rachel Varina
Which Album Will Taylor Swift Re-Release Next? Her Hints Have Fans Shaking
By Brandy Robidoux
Princess Eugenie's Instagram Tribute To Prince Philip Recounts Their Sweet Bond
By Brandy Robidoux
Stay up to date