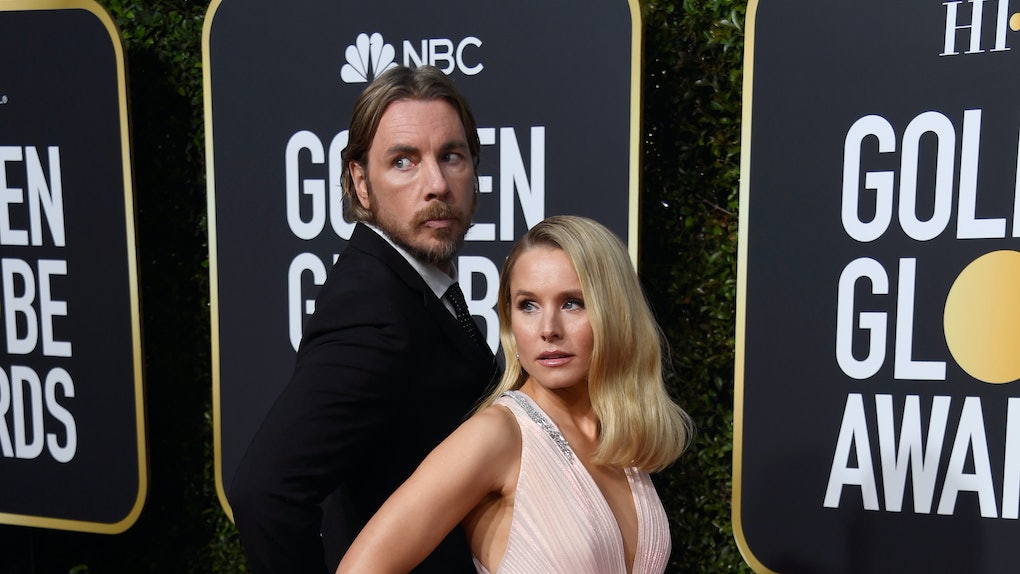 Are Kristen Bell & Dax Shepard At The 2019 SAG Awards? They Weren't Nominated For Anything

The SAG Awards are in full swing and all the stars are out tonight! Lots of fans are wondering whether some of their faves, like Dax Shepard and Kristen Bell, are at the show. Shepard and Bell are typically red carpet darlings thanks to their good looks, silly personalities, and incredible senses of humor. So, fans definitely want to see them! Are Kristen Bell and Dax Shepard at the 2019 SAG Awards? Well, it turns out there weren't any exciting reasons for the couple to turn up this year.

Unfortunately, Bell and Shepard didn't attend the awards ceremony this year because neither of them were nominated for anything. But that’s OK.

Bell and Shepard are no strangers to the SAG Awards scene. In 2018, Bell served as the first-ever host for the awards show. So, both stars are basically part of the SAG Awards family. They even shared a very interesting and comical moment during last year’s award ceremony. At one point during the show, Bell sat down next to Shepard while hosting and spoke to the camera.

“I’d like to take a minute to gush over one of my very favorite people,” Bell said, prompting viewers to assume she would introduce her husband and gush over how wonderful he is. But she didn’t do that. No, instead she went on to gush about the person Shepard was sitting next to, Greta Gerwig.

“A multi-hyphenate by definition, actor, writer, director, and producer, this very special buddy of mine is talent personified and has always embodied openness and sincerity — not so hard on the eyes either. Ladies and gentlemen, Greta Gerwig,” Bell said.

You can check out the hilarious moment down below. Seriously, these two are major couple goals:

Though Shepard and Bell are sitting out the SAGS out this year, they were both at the 2019 Golden Globe Awards earlier in the award season. Bell was nominated for Best Performance by an Actress in a Television Series - Musical or Comedy for The Good Place. The show was also up for Best Television Series — Musical and Comedy.

Though neither The Good Place or Bell won a Golden Globe, she and her husband had an incredibly fun time getting ready for the award show, as evidenced by two behind-the-scenes Instagram posts from the day. In one post on her timeline, Bell posted a photo of the couple in their award show glam with napkins tucked into their collars, and she captioned it:

In another post on her Story, Bell posted a few photos showcasing her husband getting ready for the event.

So, Shepard and Bell have done this all before. It’s par for the course at this point! There's no telling if these two are tuning into the show from the comfort of their home this year, but I'm sure this fun couple isn't at a loss for entertainment on this Sunday night. Whatever they're doing, I hope it includes their fave, Red Lobster!

More like this
Kristen Wiig Is Making A Musical About Cinderella's Evil Stepsisters For Disney
By Dylan Kickham
17 Tweets About Simu Liu In The 'Shang-Chi' Teaser, From Proud 'Kim's Convenience' Fans
By Dylan Kickham
The 'Glee' Cast's Tribute To Naya Rivera At The 2021 GLAAD Media Awards Was So Moving
By Abby Monteil
Stay up to date