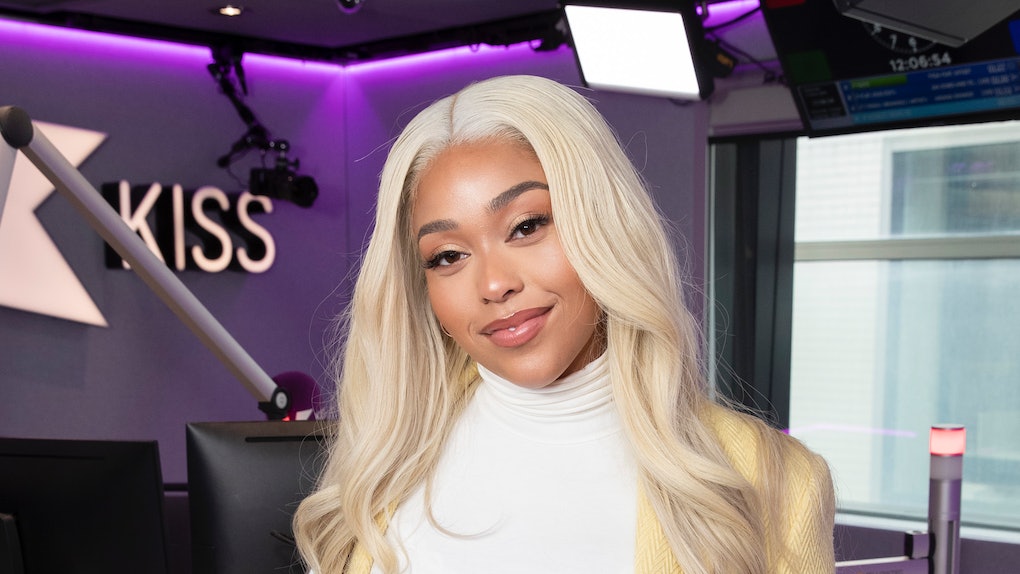 It's no secret that Jordyn Woods knows how to take a great pic. But after she posted a photo of herself wearing a diamond ring on that finger, fans began to wonder to wonder if Jordyn Woods and Karl-Anthony Towns are engaged. Well, the answer to that question is simple: No, they're not. Woods' mom, Elizabeth Woods, cleared up the rumors when she spoke to TMZ on March 26. According to Woods' mom, the ring was "simply a piece of flashy jewelry she put on for a photo shoot" and "she's definitely not engaged." Case closed!

Woods and Towns became Instagram official in September 2020 when Woods posted a photo of herself hugging Towns on a sandy beach in Cabo. To make their status even clearer, the two were wearing matching swimsuits. "I found you, then I found me," she captioned the pic. But as adorable as their romance may seem, the couple has had to deal with some nasty rumors that were spread about them on social media. On March 18, gossip blog Gossip Of The City reportedly claimed that Towns was cheating on Woods with another woman.

The blog tweeted screenshots of DMs that the Minnesota Timberwolves center allegedly sent to someone in December 2020. In the messages, he reportedly complimented an unnamed woman on how good her skin looked in her Instagram Story and supposedly told her he was going to fly her out to see him. However, she reportedly responded, "LA isn't safe to see. Wait until I come to MN. Don't want no drama." So he allegedly asked her to Snapchat him and wrote, "I got you mamita," with a winking emoji. Yikes.

But once Woods caught wind of what was going on, she shut down any speculation about her man being a cheater. "So crazy how someone can make fake screenshots and send it to blogs and y'all believe it," she tweeted on March 18. "My relationship is more than solid and I put that on everything."

Towns also laughed off the rumors and said he's more than happy in his relationship. "So I got the baddest girl in the game and you think I'm gonna waste my energy with anyone else gtfoh!" he tweeted. "Same haters we got now are gonna be the same ones we have when I put that ring on her finger." Aww.

Looks like Towns wants to make it official with his girlfriend one day... but according to Woods' mom, it hasn't happened just yet. I can't wait for the day it finally does happen though!