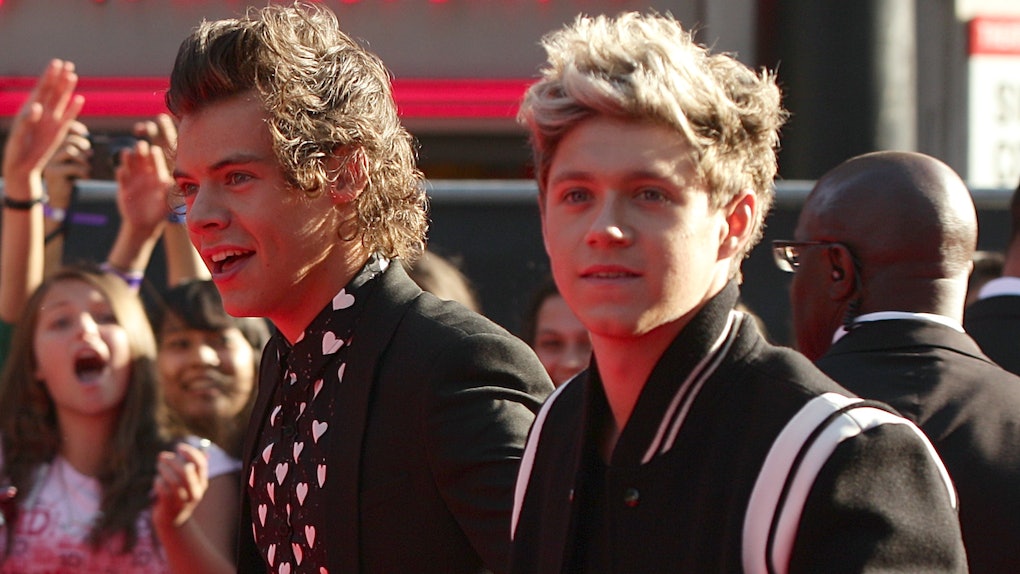 Are Harry Styles & Niall Horan Still Friends? This Update Will Make You So Happy

In a perfect world, all the members of One Direction would still be the best of friends. But it's not a perfect world, and ever since the five guys went their separate ways in August 2015 (minus Zayn, who left even earlier), there's been tension between some of the guys. Zayn Malik, Niall Horan, Liam Payne, Harry Styles, and Louis Tomlinson made some of the best pop music of the 2010s, but that doesn't necessarily mean they're still close in the 2020s. Thankfully, there's some solid evidence that two of my faves, Harry Styles and Niall Horan, are still friends.

Even at the height of 1D's fame, the two musicians were total BFFs. Horan and Styles were always joking with one another, poking fun at each other, and flat out having a ball.

At a June 2014 One Direction concert, when Styles was asked what he would do if he could be a girl for 24 hours, he replied he would "do Niall" without missing a beat. Then, let us not forget about the time Niall gifted Harry red roses onstage. You can see bromance at its finest at the 0:35 second mark below.

Of course, the two have always been just friends, but fans lived for when the two musicians leaned into the "Narry" bromance plot-line. The on-tour shenanigans may have stopped for obvious reasons, but that doesn't mean Styles and Horan haven't kept in touch. In fact, they're practically neighbors.

"I live around the corner from Harry. I've seen him recently, we were at a gig together," he revealed to Grazia magazine in May 2019.

As cool as Horan and Styles are, he admitted in the same interview he's actually closest to Tomlinson and they see "loads" of each other.

There's definitely still a huge amount of love between Styles and Horan, because, despite the competitive nature of the music industry, and the fact that the soloists constantly drop new music at the same time as each other, the pair don't let that affect their friendship. During an interview at the 2019 BMI Awards, Horan explained:

I’ve heard bits of Harry’s album, it’s good. It’s really good. We have always been on a cycle of doing the album throughout the year and then bringing out a single in September, October and then the album out at the end of the year.

In further proof both musicians are on the same wavelength, Horan dropped his single “Put a Little Love on Me,” on Dec. 6, the same day Styles released "Adore You." But don't go thinking it was a competitive move. The two have always been supportive of one another's solo careers.

In September 2017, just one year after 1D went on hiatus, Horan showed up to support Styles at one of his solo shows, and was seen grooving in the crowd.

The best news of all arrived for Directioners in June 2019 when Styles and Horan were spotted at an Eagles concert together. The run-in looked very intentional.

The Narry reunion is the ultimate proof these two boy banders are not only on great terms, but are still friends. Their support for each other's solo careers speaks volumes and, despite the demise of 1D, these two will seemingly be friends for the long haul.

More like this
How Bahari Became Instant BFFs After Starting Out In Different Parts Of The World
By Kaitlin Cubria
Are BTS & Coldplay Collaborating On A Song? Here's Why Fans Think It's Happening
By Michele Mendez
BTS' 'The Best' Japanese Album: Release Date, Tracklist, Music Videos, & More Details
By Michele Mendez
Stay up to date