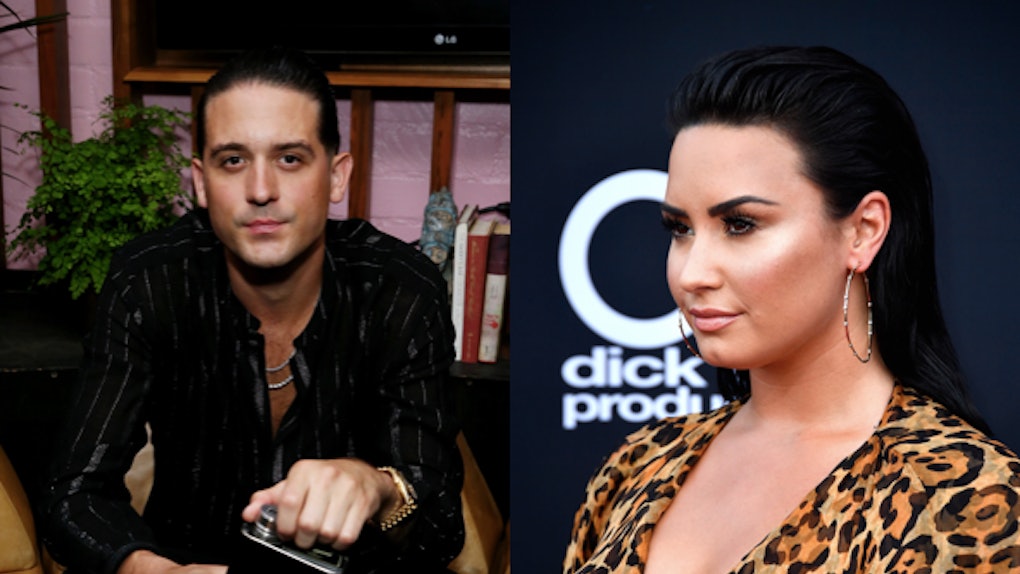 Are G-Eazy & Demi Lovato Dating? He Opened Up About Their Rumored Relationship

Hearing your ex is dating someone new can suck. But usually, for regular people, it only happens if your ex posts a coupled-up pic on Instagram. For famous people, the odds of finding out about your ex moving on (even if they haven't actually moved on at all) are much higher. For example, shortly after G-Eazy and Halsey called it quits, people started wondering, "Are G-Eazy and Demi Lovato dating?" Well, in a recent interview, G-Eazy confirmed that he's definitely not dating the pop sensation. Elite Daily has reached out to reps for both G-Eazy and Lovato for confirmation.

The rumor that G-Eazy and Lovato were dating started swirling after the two were reportedly spotted holding hands leaving a Los Angeles night club. However, in an interview with ET on the red carpet of the 2018 ESPY awards at L.A.'s Microsoft Theater just yesterday, the 29-year-old rapper confirmed that he is, in fact, still single. When asked about the rumored relationship with Lovato, he responded that she's "just a friend."

G-Eazy is just now coming off from his breakup with Halsey, who first shared the news of the split with their fans via her Instagram story on Jul. 3. Her message read:

She followed up her announcement with a tweet that insinuated the reason behind the breakup might have been that G-Eazy wasn't the most faithful partner. On July 4, she simply tweeted "pumpkin eater." Many fans took the tweet to be a play on the popular rhyme, "cheater, cheater, pumpkin eater."

Cosmopolitan reports that Halsey may have hinted at his rumored infidelity another time in a now-deleted tweet featuring the scissors emoji. Fans took that to be a reference to the lyrics in their popular song together, "Him & I." In that song, G-Eazy raps the lyric, "Ever catch me cheating, she would try to cut my d*ck off."

The couple reportedly started dating after G-Eazy put an immense amount of effort into convincing her that they would be a great match. She told E! News at the 2018 Billboard Music Awards, "He was just really persistent. He really wanted to hang out and really wanted me to like him a lot. It took me a while to be like, ‘Fine. Okay I like you back.'"

Despite their adorable beginnings, this match might not have panned out the way they had hoped. Their song together is still a banger, though.