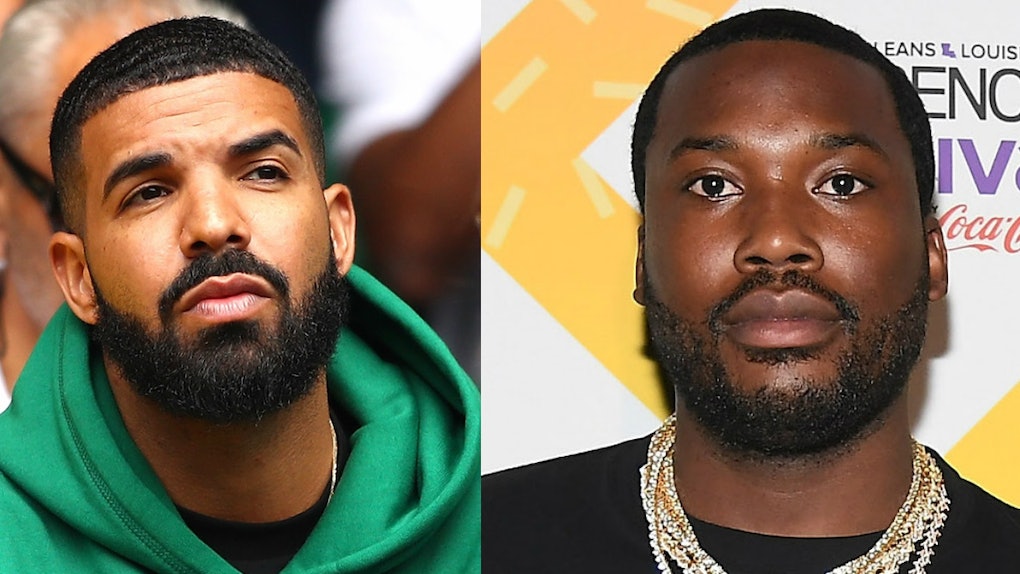 Are Drake & Meek Mill Still Feuding? Their Reunion On Stage Could Mean It's All Good

One of the most storied rap beefs of the moment might be coming to an end, and no, I don't mean Nicki Minaj and Cardi B. Given some recent revelations, some of you might be wondering: are Drake and Meek Mill still feuding? Well, their surprise joint performance on Saturday, Sept. 8 seems to hint that their longtime quarrel might have taken a positive turn. Fans think that the unexpected reunion could mean they are friends again, and Twitter is here for it.

It appears as though the two musicians might be putting their history behind them. During Drake's Aubrey and The Three Amigos Tour stop at Boston’s TD Garden on Saturday, there was a moment that hinted at a reconciliation. During the concert, Meek Mill surprised concertgoers when he was invited on stage and the pair did a joint performance of "Dreams and Nightmares" for old times' sake.

He continued, "We need more peace in the world, we need more love in the world. Meek Mill, that’s my brother ... from day one, so we were able to this tonight in front of y’all."

In between all the diss tracks, social media digs, and just all-out drama over the past couple years, it's hard to remember that the pair used to be pretty close pals. They used to make music together and in 2014, Drake even praised his fellow rapper for having "one of the best rap moments of our generation" with "Dreams and Nightmares." That's pretty high praise coming from Drizzy. However, that all changed in 2015 when Meek Mill claimed that Drake used a ghostwriter for his music *gasp* after which the "Hotline Bling" hitmaker totally ended him with his shadier-than-thou diss track, "Back to Back."

Cut to Saturday night, and the two look just like best pals again. Drake later took to Instagram to share a shot from the joint performance where he can be seen shaking Meek's hand.

This really gave me peace of mind tonight. Healing and moving forward created one of the most electric and gratifying moments of my career. @meekmill I’m happy that you are home and that we could find our way back to our joint purpose 🙏🏽🙌🏽 (Cue the Kevin Garnett “anything is possible” adlib)

So, what caused the sudden change of heart? For starters, there were rumors that Meek Mill and Drake started feuding after they both started dating Nicki Minaj. Judging from the fact that the "Anaconda" songstress called out both men in her new "Barbie Dreams" track, I'm betting that they're not feeling too happy about Nicki right now. Then, there's the timing of another rap beef that's been dominating news headlines: Nicki Minaj and Cardi B's explosive fight, which went down at a New York Fashion Week Party one night earlier on Friday, Sept. 7. Coincidence? I'm just saying that it's suspicious. Maybe Meek Mill and Drake figured it'd be best to remove one longstanding feud from the music world.

Whatever the reason, fans are ecstatic about the reunion.

Now, the real question is, will we be seeing some Champagne Papi and Meek Mill collaborations in the near future?