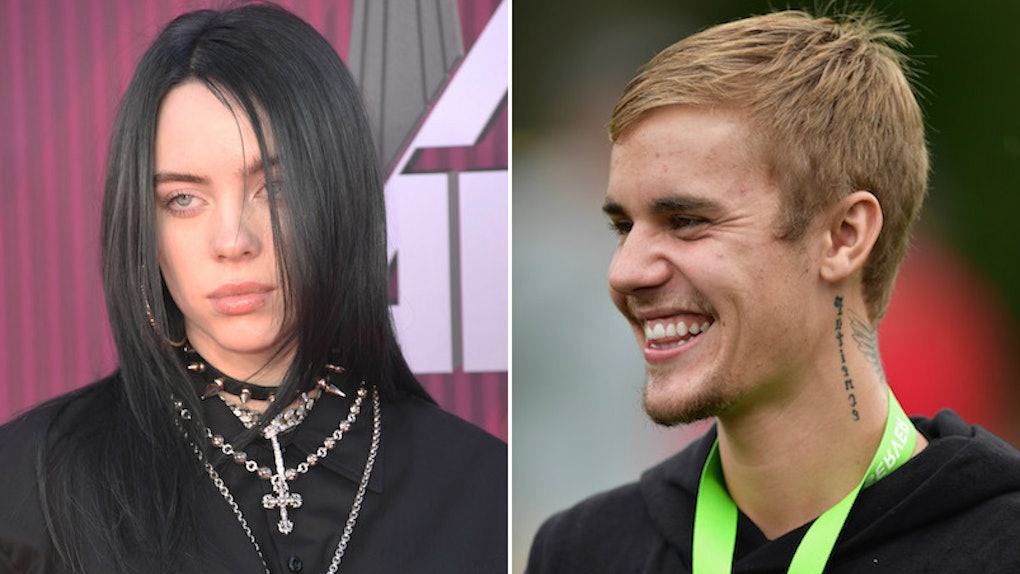 I don't want to cause mass panic, but are Billie Eilish and Justin Bieber collaborating? Suspicious activity on their various social media accounts and a mysterious clip of leaked audio has music fans wondering if this dream could possibly be coming true. Eilish has been a vocal long-term Bieber fan and after the two met at Coachella 2019 it seems like the pop culture gods might have started to work their magic. Elite Daily reached out to both Eilish and Bieber's teams for comment on the rumors and leak but did not hear back by the time of publication.

UPDATE: The remix of the summer is here! On July 11, Eilish and Bieber took to Instagram to share their new "Bad Guy" remix with the world, confirming that all the speculation surrounding a Billieber "Bad Guy" remix was true. The new track features a brand new, original verse from Bieber!

PREVIOUSLY: Bieber and Eilish's Coachella hug was the embrace seen around the world. At first glance to older millennials like me, the connection between Bieber's fanbase and Eilish's following might not be so immediate. Where Bieber oozes sex appeal, Eilish literally oozes from her eyeballs in her music videos. Part of Bieber's appeal is his undeniable baby-face suaveness, and Eilish's appeal is in her total disinterest in being anything cute, adorable, or "baby." Still, the moment I found out she (like all of us) is a Belieber, it totally made sense.

Both of these icons are polarizing, dynamic, love a baggy sweatshirt, and are irrefutably talented AF. It's a match made in some high school sophomore's heaven.

Here's what's up: For one reason or another, the music zeitgeist stirred up a theory that Eilish might be working on a new album. Her debut album When We All Fall Asleep, Where Do We Go? is nothing short of a staggering success. For all intents and purposes, she's primed to release her next smash and a few star collabs and cameos wouldn't hurt anything either.

OK. So they're friends. We're all up to speed.

On July 9, Eilish jumped on her Instagram stories to address the new album rumors. She wrote the message, "the new album sh*t is fake," but she teased she has something else for her fans.

She then posted a series of photos from what looks like it could be a music video with a slice of the audio from her hit "All Good Girls Go To Hell." She followed that up with this note ambiguous note:

To throw fuel on this raging Billie fire, Bieber got busy on his own Twitter account and tweeted one simple word: remix.

Sure, Bieber's tweet is not an immediate reference to Eilish, but what if I told you her brother Finneas retweeted Bieber's tweet? Now there's a little bit of a case, isn't there?! Add to that the fact that a video of leaked audio that sounds like Justin Bieber crooning an original verse to "Bad Guy" was floating around on YouTube on July 9, and you can all but confirm a Billie-ber remix is coming soon.

Fans are trying to decipher if these clues are pointing to an "All Good Girls Go To Hell" remix featuring Bieber and/or if he'd jump on her arguably most famous track, "Bad Guy." Or maybe both? Either way, fans are all the way in.

I've got to be honest with you. I'm kind of loving the idea of Bieber stepping into this mentor-like role. If there's anyone that knows about growing up in the limelight it's him and he and Eilish could seriously make a dynamite team.