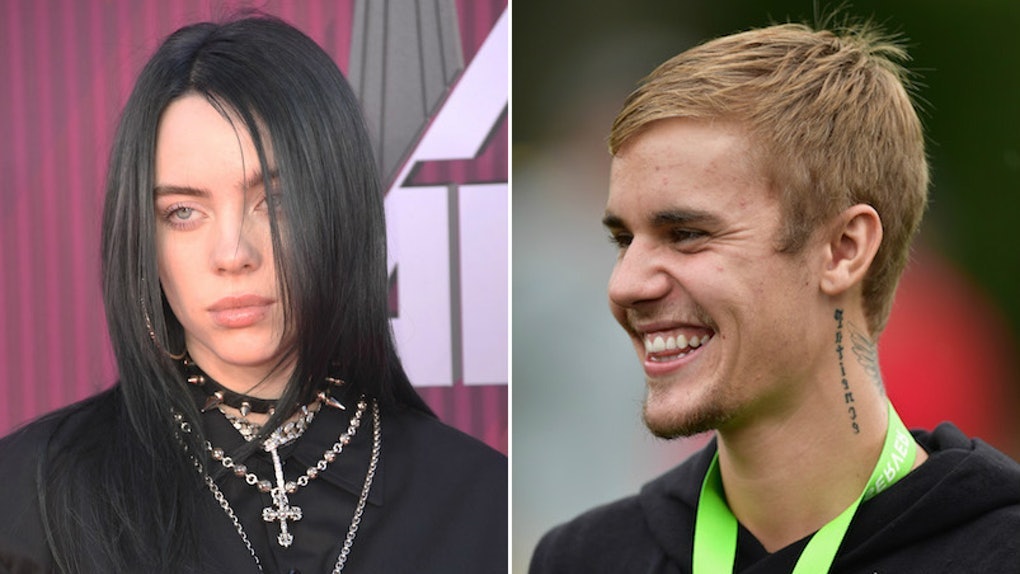 Billiebers! Calling all Billiebers! Billie Eilish & Justin Bieber's "Bad Guy" Remix is here! (And yes, I combined Billie and Bieber to make the ultimate fandom name. You're welcome.) Eilish just announced the track over Instagram with a hilarious photo of her room covered in Justin Bieber posters. I'd call that definitive proof it's a must-listen track.

The single features an additional verse and some deliciously-sounding ad-libs from Bieber throughout the three-minute track.

The Gold teeth, my neck, my wrist is froze (So icy) / I got more ice than, than the snow / That guy, don't act like you don't know / That guy, so critical (Skrrt) / Tattoos on both my sleeves / Yeah, I don't sleep, please don't wake me / Loosen my tie up so I can breathe / It ain't political, oh no (Uh-uh)

Bieber and Eilish need to do this more often. The "Bury A Friend" singer's breathy vocals paired with Bieber's smooth chords make the perfect ear candy.

Now, many of us Billiebers knew the pop stars were up to something for a while now. The first inkling was that both singers were fans of one another, as far as we could tell. In an interview with Billboard in March 2019, Eilish fangirled over Bieber, revealing he DMed her and the two musicians discussed the possibility of a collaboration. "We talked about making some stuff," she hinted.

In April 2019, Bieber tweeted, "Proud of you @billieeilish," after her set at Coachella. Then, a few hours later, the two met in person and it was a sight to see. Eilish stared at him for like, forever, before the two singers embraced each other in the sweetest hug. See, it was only a matter of time, fam, only a matter of time...

On July 3, Eilish dished on her undying love for the fellow pop star in an interview with Marie Claire. "It wasn’t like I was just a fan, man,” she said. “I’ve been in love before, and it was with him.” Same girl. Same.

And then, both Eilish and Bieber dropped a few major hints on social media. On July 9, the "When The Party's Over" singer took to her Insta Story to debunk album rumors, but teased something to come that could be just as satisfying. "The new album sh*t is fake, but I might have something for you," she wrote.

The day before (July 8), Bieber tweeted one word: remix. You might not think that's leading until I tell you it was retweeted by music producer and Eilish's brother Finneas. Now, pair that with the fact that a leaked version of Bieber singing "Bad Guy" was already making its round on YouTube and I'd say we had our proof.

Honestly, I'm so happy for this day, not only because the "Bad Guy" Remix is a summer banger, but Eilish's dreams just came true, y'all! She captioned the announcement of the collab on her 'Gram with "BAD GUY FEAT. JUSTIN BIEBER OUT NOWWW OMGFFFFGGG ANYTHING IS POSSIBLE MAN." Anything is possible. You go, Billie!