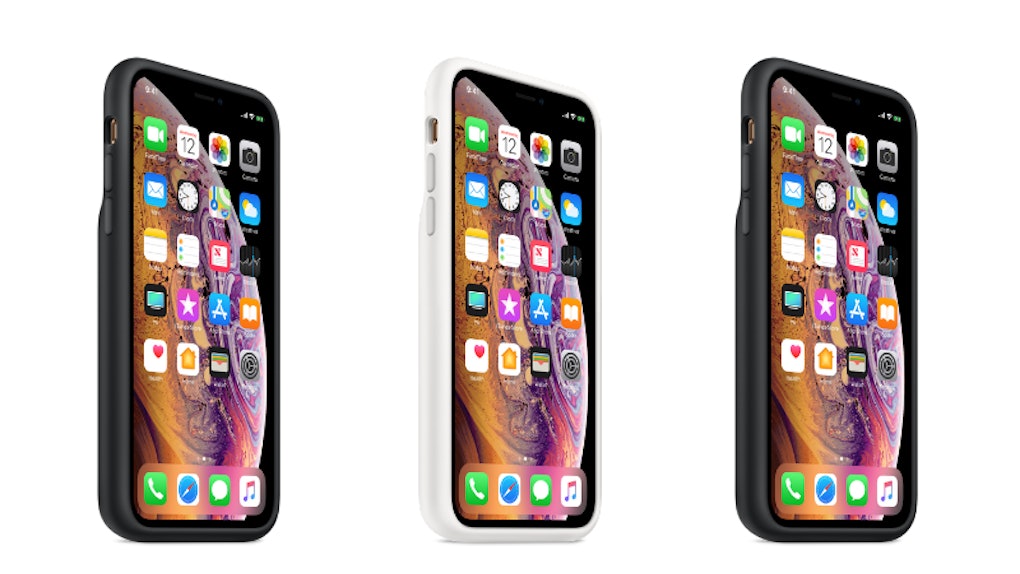 As Apple has continued to update its lineup of smartphones over the years, the latest iPhones have consistently boasted faster processing speeds, bigger screens, and countless cool new features. The one downside to all these advancements, however, is the fact that your phone is working harder than ever to keep up with your 'Gramming and snapping, as well as the countless apps you house on your iPhone. All that activity can drain the juice from your device, which is why I was so excited to see Apple's Smart Battery Case for iPhone XS, XS Max, and XR is finally available. The tech giant launched the sleek new models on Tuesday, Jan. 15, so prepare to say goodbye to your charging woes and hello to the cord-free lifestyle.

Since the company released its newest generation of iPhones, which boasted a dual-lens 12 megapixel camera as long as the customer-favorite feature of improved battery life, Apple devotees have been buzzing about battery cases that promise to keep your gadget juiced up and running for longer than ever before. Let's be real: Nothing's more of a buzz kill than having to stop what you're doing to go home to charge your phone. And while the approximately 1.5 hours of extra battery life that users got with their iPhone XS was a nice upgrade, I'll admit I've been impatiently waiting for Apple to release their accompanying Smart Battery Cases. Now that they are here, they look like the perfect accessory for anyone who's busy living that on-the-go lifestyle and doesn't have time to worry about charging up.

According to press materials from Apple, customers can purchase the Smart Battery Case on the Apple Store app, in Apple Stores, and at select Apple Authorized Resellers and carriers. Here's what you can expect with the new gadget. Appearance-wise, the three different silicone cases come in either black or white and feature a slightly sleeker design than some of Apple's previous models.

Obviously, one of the main functions of a phone case is to keep your expensive smartphone from cracking or breaking, and the product relies on its soft microfiber lining as well as its silicone exterior to protect your device while keeping the design as sleek as possible.

Price-wise, the Smart Battery Case for the iPhone XS, iPhone XS Max, and XR are all retailing for $129 on Apple's website. One of the coolest features is that the cases are compatible with Qi-certified chargers, which means that you can wirelessly power up your iPhone and the case separately or at the same time. You can also choose to get a faster charge with a Lightning cable or from USB-PD compatible chargers. The devices are also compatible with Lightning accessories, meaning you can charge up your AirPods whenever you want.

The most impressive thing about the new chargers might be how much bang (or rather, juice) that you're getting for your buck. For example, the iPhone XS's Smart Battery Case boasts approximately 33 hours of talk time, 21 hours of internet usage, and 25 hours of video playback, which means that you're pretty much getting a day's worth of power. Considering that the gadget normally gets only 13 hours of internet usage, this is a pretty big jump, and in my opinion, well worth $129.

I know it's a little mind-blowing to think about, but that's almost 24 whole hours that you could be scrolling through Instagram or snapping your friends without needing to charge up in between. Whether or not you plan to take advantage of all that internet usage, who wouldn't want to spend a day (and a night) out on the town without worrying that their phone is going to die? Technology is pretty amazing, y'all, and I have a feeling that customers are going to love Apple's latest product.

More like this
Here Are 15 Clear iPhone Cases To Show Off Your Colorful Device
By Cianna Garrison
Here's How To Use App Tracking Transparency On Your iPhone To Customize Privacy Settings
By Lara Walsh
Why Won't My Apple Watch Unlock My iPhone In iOS 14.5? Here's What You Should Check
By Lara Walsh
Stay up to date