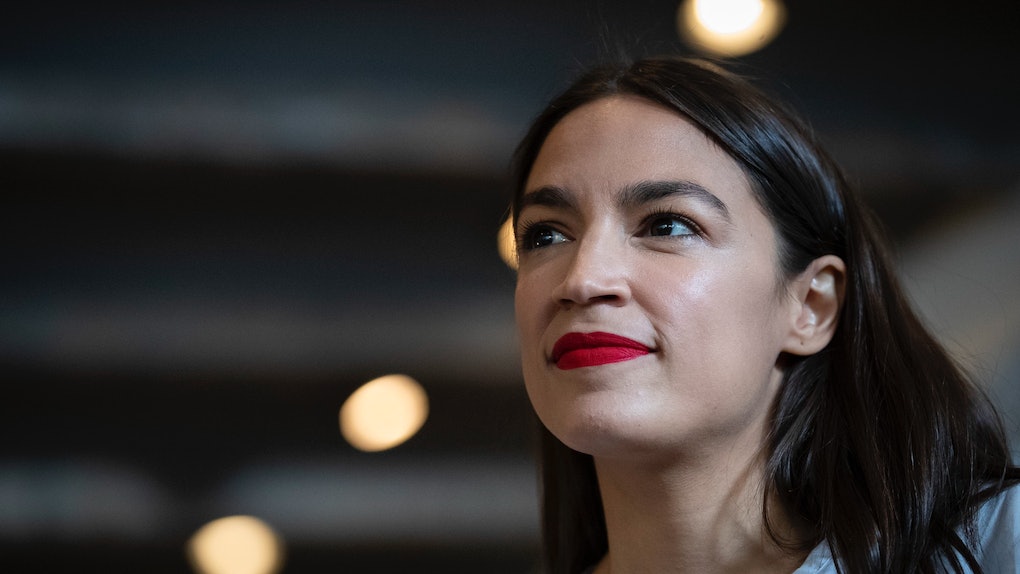 If you thought that Ariana Grande and Lizzo's remix of "Good As Hell" was going to be the biggest collab to drop this week, think again. Shortly after the "Thank U, Next" hitmaker took to Twitter to check on her followers, one freshman Representative decided to use the occasion to share her own take on Ari's biggest hits. Alexandria Ocasio-Cortez’s tweet about Ariana Grande songs slides in all these policy references, and the songstress herself is so here for it.

It all started on Friday afternoon when Ariana Grande logged on to Twitter to ask her followers "Baby how u feelin,'" in reference to her and Lizzo's latest project together. It's safe to say that the musicians' collab was the bop that we didn't know we needed on our playlists, but now that it's here, fans — including one senator from Vermont — flooded the comments section with their own take on the "Good As Hell" lyrics.

Democratic presidential candidate Bernie Sanders shared a politics-inspired spin when he responded, writing, "Ready to fight for Medicare for All." Grande couldn't help fangirling over the social media shout-out from one of the Democratic party's top candidates, and she made her feelings clear when she responded "Screaming."

She upped the "screaming" factor when Alexandria Ocasio-Cortez — who recently endorsed Sanders along with fellow congresswomen Ilhan Omar and Rashida Tlaib following the last Democratic debate — took to the social media platform to chime in with her own version of an "Ariana dance party." If you need some inspiration for your weekend playlist, Ocasio-Cortez has got you covered with her version of "progressive policies as an Ariana dance party."

Grande's breakup anthem "Thank U, Next" was a call to swap out for-profit health insurance with Sanders' Medicare For All plan, while "God is a Woman" was inspiration to repeal the Hyde Amendment, which is a law that prohibits the use of federal funds to pay for abortion except in the case to save the life of the woman, or if the pregnancy is a result of incest or rape.

Meanwhile, "Break Free" got the student loan debt forgiveness treatment, while Ocasio-Cortez told followers that they'd all "Be Alright" if they pass a Green New Deal.

Grande had two words for the freshman lawmaker's take on her set list, responding, "Screaming Screaming."

Grande also took to Instagram to share her excitement over the political responses to her tweet, writing that she "won't be getting over this any time ever."

Ocasio-Cortez's tweet came just days after she opened up to a few news sources about why she decided to publicly back Sanders during a rally for the senator in Queens, New York.

Per The Intercept, she told NBC at the event, "For me, it wasn’t even about helping the senator. It was a moment of clarity for me personally in saying, What role do I want to play? And I want to be a part of a mass movement."

Meanwhile, in response to a tweet from an Elizabeth Warren supporter, she reiterated that her support was in no way a dig at the Massachusetts senator.

"We should all be grateful to have such strong, progressive leadership to choose from," she wrote on Twitter. "For many it’s a tough choice precisely because of how great they are. I’m confident we will all come together on the other side stronger than ever."

From the sounds of things, Grande is feeling "Good As Hell" about Ocasio-Cortez and Sanders' takes on her biggest bops. While I'm doubting that the three will collaborate on a remix anytime soon, I definitely wouldn't rule out hearing some Ari songs at campaign rallies in the near future.