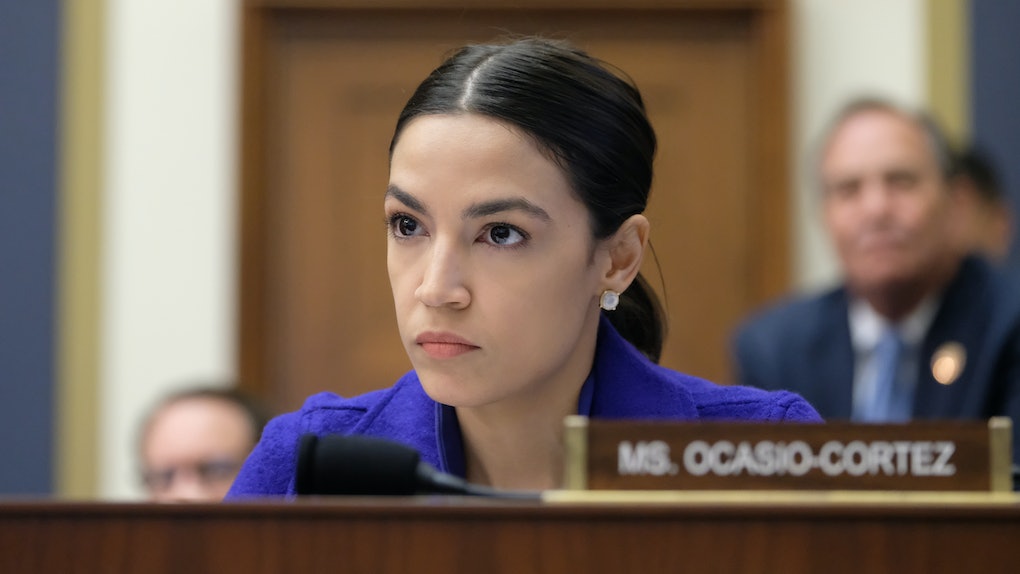 In his three-part thread on Sunday, Trump suggested "'progressive' Democrat congresswomen," who he claimed came from other countries, should "go back" to those places. He wrote in his first tweet, "So interesting to see “Progressive” Democrat Congresswomen, who originally came from countries whose governments are a complete and total catastrophe, the worst, most corrupt and inept anywhere in the world (if they even have a functioning government at all), now loudly [...] and viciously telling the people of the United States, the greatest and most powerful Nation on earth, how our government is to be run."

Why don’t they go back and help fix the totally broken and crime infested places from which they came. Then come back and show us how [...] it is done.

‌He brought Speaker Nancy Pelosi (D-California) in the mix with his final tweet, writing, "These places need your help badly, you can’t leave fast enough. I’m sure that Nancy Pelosi would be very happy to quickly work out free travel arrangements!"

While Trump's tweet didn't mention the "progressive Democratic congresswomen" by name, people on Twitter believe Trump was singling out Rep. Ilhan Omar (D-Minnesota), Rep. Alexandria Ocasio-Cortez (D-New York), Rep. Rashida Tlaib (D-Michigan), and Rep. Ayana Pressley (D-Massachusetts), especially because all four women have been vocal in their criticism of the Trump administration. Elite Daily reached out to the White House for further comment on the tweet and to whom the president was referring, but did not hear back at the time of publication.

In her three-tweet response, Ocasio-Cortez hit back and gave a nod to detention facilities at the border when she wrote, "Mr. President, the country I 'come from,' [and] the country we all swear to, is the United States. But given how you’ve destroyed our border with inhumane camps, all at a benefit to you & the corps who profit off them, you are absolutely right about the corruption laid at your feet."

She claimed President Trump isn't a fan of the current makeup of Congress, and she closed her response, saying:

You are angry because you can’t conceive of an America that includes us. You rely on a frightened America for your plunder. You won’t accept a nation that sees healthcare as a right or education as a [No. 1] priority, especially where we’re the ones fighting for it. Yet here we are.

Elite Daily reached out to the White House for comment on Ocasio-Cortez's claims in her response to Trump's tweet, but did not hear back at the time of publication.

The speaker of the house also chimed in, and Pelosi called Trump's comments "xenophobic" and wrote:

When [Donald Trump] tells four American Congresswomen to go back to their countries, he reaffirms his plan to 'Make America Great Again' has always been about making America white again.

She closed her tweet with, "Our diversity is our strength and our unity is our power."

Elite Daily reached out to the White House for a comment on Pelosi's response to President Trump, but did not hear back at the time of publication. Trump has previously denied claims of xenophobia and racism, once calling himself "the least racist person."

In a second tweet, Pelosi said Trump should work with Democrats to implement humane immigration policy that reflects American values rather than attack members of Congress. It's also interesting to note Pelosi's defense of the congresswomen comes after she recently knocked their "Twitter world[s]" in an interview with The New York Times published on July 6.

After Trump posted his thread, Omar posted a concise response, saying, "Mr. President, [a]s Members of Congress, the only country we swear an oath to is the United States. Which is why we are fighting to protect it from the worst, most corrupt and inept president we have ever seen."

People on Twitter have a lot to say about Trump's recent Twitter thread as well. Sen. Bernie Sanders (I-Vermont) quote-tweeted Trump's tweet and wrote, "When I call the president a racist, this is what I'm talking about. We must stand together for justice and dignity towards all." Elite Daily reached out to the White House for comment on Sanders' response and responses that call the president's Twitter thread "racist," but did not hear back at the time of publication.

Rep. Ted Lieu (D-California) took a more personal approach when responding to Trump's tweets, writing, "As an immigrant who served on active duty, I am appalled you are telling us to 'go back.' I'm not going back. America is our home. And I will still be in Congress after your racist ass leaves."

Twitter user @StevePeers, a "Professor of EU, Human Rights & World Trade Law, University of Essex," per his Twitter bio wrote, "Telling non-white citizens to go back to countries they weren't born in is standard racist abuse - if anyone was still in any doubt about Trump's racism."

President Trump has previously denied claims of racism, and as of publication, he has not responded to the commentary on his Twitter thread.

With the recent divide amongst Democrats, it seems like admonishing Trump's early morning Twitter thread might actually be one thing they can all agree on. Time will tell what comes next for Dems on the road to 2020, but I think everyone will be keeping an eye on President Trump's Twitter account.