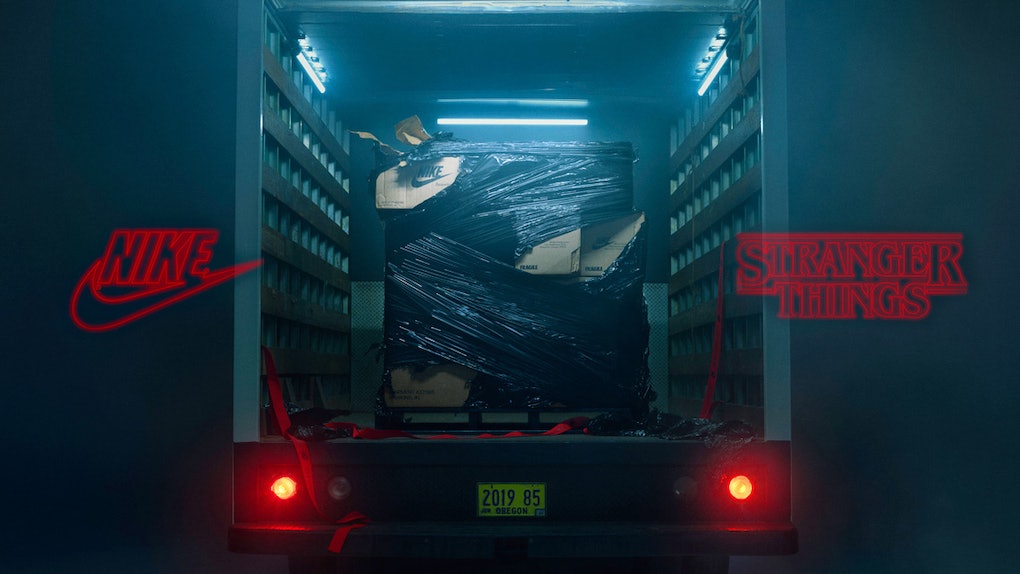 I'm going to cut right to the point, because this news is just that good. A Nike x Stranger Things collaboration is officially on its way, and it's chock full of '80s-inspired styles that Eleven, Mike, Dustin, Lucas, and the rest of the crew would rock with ease. If you can't wait until the July 4th premier of Stranger Things season 3, you'll be excited to know that you'll be able to get a little dose of Hawkins, Indiana before then in the form of an apparel and sneaker collection. But as Nike detailed in a press release, it's not just any product drop. In fact, its backstory is entangled with the very narrative it celebrates:

“In the summer of 1985, several transport vehicles departed from Nike HQ in Beaverton, Oregon, carrying special product shipments headed to multiple locations across the US. Unfortunately, a few of the shipments never made it to their destination. These vehicles all had one thing in common…they were last seen on surveillance footage passing through Hawkins, Indiana. Nike, concerned and confused, never mentioned these missing shipments to anyone for fear that something supernatural was at play. 34 years later, signs of the missing shipments are popping up, piece by piece, and it’s clear that there is something deeper, darker and more evil brewing.”

While we may never know what caused Nike's shipments to disappear all those years ago (perhaps Demogorgons have a penchant for sneakers?), one thing's for certain: you're going to be stoked they're cropping up now.

The collaboration will arrive in two drops, both of which celebrate three classic Nike styles: the Cortez, Blazer, and Tailwind. The first pack, called "Hawkins High School," celebrates 1980's style and features a green and orange color scheme as well as appearances from the school's Tiger mascot. Sweat suits, t-shirts, and a hat are included along with the sneakers, and boast a phys-ed class appeal.

"As in the prior two seasons, 1980s nostalgia informs the Hawkins scene," wrote Nike of Stranger Things season 3 in a press release. "This extends to the costuming, where classic Nike footwear and brand marks are common. Off-screen, this nostalgia is the impetus for the Nike Stranger Things collection, highlighting the Cortez, Blazer and Tailwind."

This drop will arrive on June 27 at nike.com.

The second drop, which will arrive just in time for the holiday on July 1, boasts an appropriately red, white, and blue color scheme. Called the "OG Pack," it celebrates the important year of 1985, featuring year markers on the heels of every shoe as well as firework display sockliners. Complementary sweats will also arrive with the pack.

"The sporting world in 1985 was also undergoing a radical change — energy was reverberating from the summer games in Los Angeles and pro basketball was swinging firmly into its showtime era," explains Nike of the year's significance. "At Nike, 1985 was the year visible Air began to take shape (realized two years later in the Air Max I) and when the iconic Dunk emerged on collegiate basketball courts. Meanwhile, the Cortez, Blazer and Tailwind remained sport and style staples, granting a timely authenticity to the Stranger Things collection."

Now if only Barb could magically turn up, too.