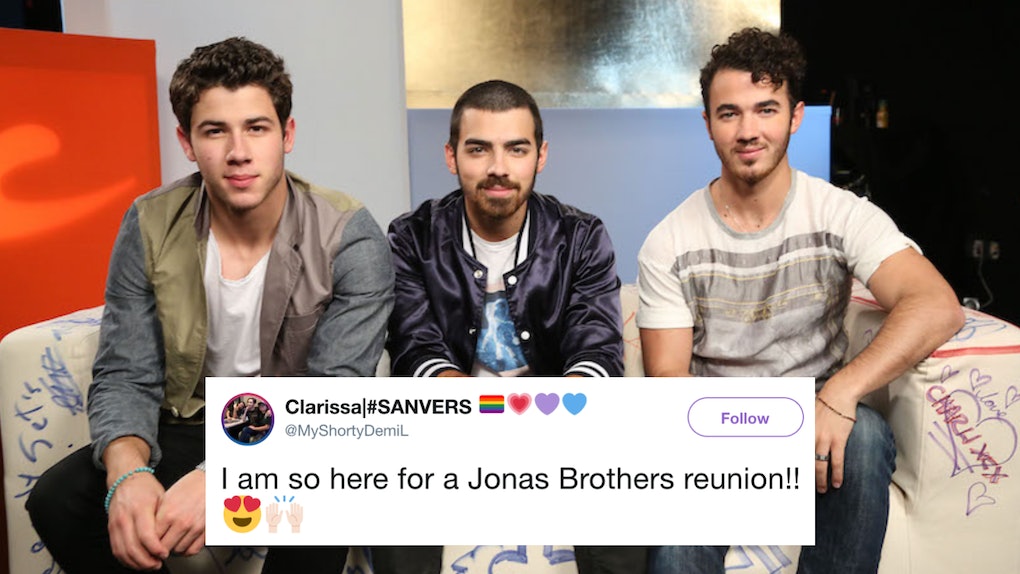 Wait a second... did I fall asleep and wake up on Christmas? I just heard a Jonas Brothers reunion may actually be in the works and my inner fangirl just put on her party dress and lip gloss. Nick, Kevin, and Joe Jonas split up their brother band six years ago and embarked on their solo endeavors. Nick blew up as a solo artist, Joe ate cake by the ocean with DNCE, and I'm not really sure where Kevin's been, but I'm happy to see him back, anyway. Multiple sources told to US Weekly that plans for the reunion are underway, which is enough to freak fans out. Elite Daily reached out to reps for the Jonas Brothers for comment but did not hear back by the time of publication.

Kevin, 30, Joe, 28, and Nick, 26, initially hit the music scene with a family-friendly vibe and innocent swagger. They brought us hits like "Burnin' Up" and "Lovebug" and packed their stage performances with more hair product than a Pantene commercial. It was an awesome time. When they announced their split in 2013, fans were distraught. Dramatically, the brothers abruptly canceled their tour and deleted their Twitter account. At the time, a rep told US Weekly the decision to call things off was due to a "deep rift within the band.”

During a group interview with Good Morning America, Kevin revealed he called his brothers in for a group meeting and "shared my heart with them and my feelings." Kevin added, "I said, ‘Look, I feel like we’ve had some complications within the group for a long time [and] without addressing them I think this train will fall off the tracks.’”

Since then, the brothers have grown as independent people and artists. Fans know there is no lingering bad blood considering they've popped up to support each other over the years, are regularly featured on each other's social media accounts, and just recently celebrated Nick's engagement and marriage to Priyanka Chopra. TBH, the good Jonas vibes have been flowing, which make it a great time for a comeback!

According to reports from The Sun, the brothers are not only planning to release more music, but they're working on a documentary as well. (Squeal!) The source explained, "After enjoying solo music success and taking time to work on passion projects, they feel that now is the right time to get back together."

To throw fuel on the fire, sources told US Weekly the musical trio will be dropping "Brothers" from their group name and will go by the single title, "JONAS." (Y'know, like their Disney Channel show, but not really.)

So far, none of the brothers have officially confirmed anything, but they're certainly not denying it either. In fact, Nick is going around liking Twitter comments from fans who are pumped about the reunion rumor. According to US, he liked one tweet on Sunday, Feb. 17, that read:

11 years ago I became a fan of the Jonas Brothers but I never had the chance to see them live. If a reunion is really gonna happen I will be the happiest man on earth.

For now, all fans can do is stand by and try to remain calm. (Low-key, I'm telling my inner party-girl to hydrate and brace herself.)