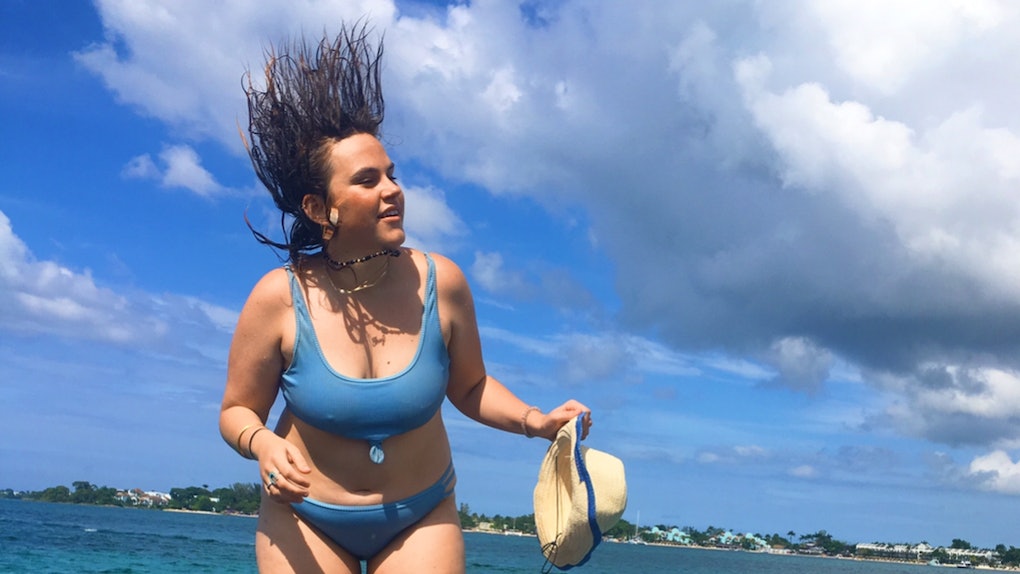 The hour before my flight to Philadelphia was the first alone time I'd had in a week. I had just spent five days at an adults-only, kink-friendly, clothing-optional resort in Jamaica, and I welcomed the silence. Walking through the international terminal, I passed an airport bar and held eye contact with an elegant woman. She was achingly sophisticated, wearing a cashmere sweater and sipping on a glass of chilled white wine. Had I never seen her before, I would have surely assumed that someone so refined would be shocked, if not repelled, by the way I had just spent my week. She looked like someone I'd expect to see shopping for artisanal jams at a specialty grocer, not walking a man around on a leash at a poolside cabana in Jamaica.

Or so you'd think.

As we exchanged smiles and subtle winks (the way you only can with someone that's watched you carve a pumpkin completely naked), I realized just how wrong judgments based on first impressions can be. And as I made my way to my gate, I thought about how often I must write people off before even getting to know them, especially on dating apps.

Naked pumpkin carving was one of many activities I participated in during my week at Hedonism II, a pleasure-centered resort in Negril, Jamaica. Founded in 1981, Hedonism II (or "Hedo," for short) is a welcoming and open-minded place for adventurous adults to let their guard (and their pants) down. With 280 guest rooms, and day passes available for couples and singles, Hedo is open for all types of funny business, year-round.

When I first received an email invitation to Hedo, I was sure I was being Punk'd. Who did they think I was, a beauty influencer? Before I had time to freak out about the logistics (would this be the plot of Taken 4?), I RSVP'd "Yes" and fell further the rabbit hole.

On Oct. 29, I woke up early and boarded a plane to Jamaica with an overstuffed army backpack held together with carabiners. My given itinerary for the trip included a glow-in-the-dark party, a fetish night, a Halloween bash, a "glam"-themed soirée, and a list of daily activities, like snorkeling and yachting (casual). On my flight over, I felt surprisingly nervous. I'd never been one to be sheepish about baring it all, but I felt lingering stress about being surrounded by a bunch of naked strangers for an entire week.

But once I arrived at the resort, I immediately felt at ease. The building facade and furniture were so retro; I felt as if I'd been transported back in time. As I checked in, I was handed a glass of Champagne and told to sit back and relax while they finished my paperwork. Upon questioning just where the heck everyone was, I was informed that Hedo comprised two sides: "Nude" (where clothing was not an option) and "Prude" (where you could wear whatever you wanted). Most patrons chose to spend their time on the strictly "Nude" side, which was a short walk away from the lobby.

The resort was full of lush green trees and tropical frogs that made a noise that sounded like a car alarm. Walking to my room, I was greeted by an array of naked guests. They offered me warm smiles as I passed.

Welcome to Hedo, I thought to myself.

My room was white and teal, with a king-sized bed, a giant vanity, and a mirror on the ceiling. I quickly threw on a crocheted top and ventured out into the wild.

Unsure of where to go first, I stumbled upon the main dining room and walked right into a sea of nipple pasties, neon bracelets, and rhinestone bikinis. I was shocked to discover women — around my grandmother's age — wearing harnesses, crowns, and collars. There were bodies of all shapes and sizes, strutting around with the confidence of a Victoria's Secret angel reading a Brené Brown book.

For the first time in my life, I was not the most extra person at the party. I was shook.

The first item on my agenda was to make a friend, an ally I could navigate the week with. So, I linked up with another writer on the trip, and together, we vowed to experience everything that Hedo had to offer. After stopping at a jazz club and singing inappropriate versions of Elton John songs, we grabbed drinks and made our way to the "Nude" side.

Our first stop was the pool — a tiled lagoon filled with waterfalls and 50 or so other naked patrons. Smiling to myself, I dropped my drawers and dove head-first into the water. And as I came up for air, I saw something out of the corner of my eye that nearly took my breath away.

Not four feet away from me was the most elegant older woman I have ever seen.

At first glance, she was a dead-ringer for my grandmother's next-door neighbor. Her hair was cut into a bob, and she wore nude lipstick, pearl earrings, and nipple covers. As she strutted around the pool's perimeter, I noticed she was walking a man around on a leash.

I felt taken aback. Although I tried my hardest not to stare, I was mesmerized by her. She was both elegant and refined yet liberated and sexy. This was not my grandma's neighbor. She was undefinable, difficult to categorically place in a box.

For the next four days, I sipped piña coladas, went on beautiful boat trips, and watched in awe as adults of all ages, shapes, and sizes did whatever the heck they wanted, whenever the heck they wanted. They got as naked as they desired, talked to everyone, and ate as much as they wished, without fear of being judged or labeled. And in turn, they didn't judge or label anyone else.

On the morning of my flight home, I boarded an airport shuttle with a host of fellow Hedo heads and bid my week-long foray into nudism farewell. As I walked through the terminal to my gate and passed the airport bar, I locked eyes with the same woman I had been captivated by a few days prior. Even when stripped of her harness, I found her totally dynamic and impossible to box in.

That's when it dawned on me: Had I not witnessed her affection for kink IRL, I so easily would have jumped to conclusions about who she was based solely on her age and demeanor. I would have assumed so much about her life and interests, due to nothing more than her cashmere sweater. I began reflecting on how easily and often I jump to unfair conclusions about people based on the version of themselves that they outwardly convey in everyday life. And I thought about what I would have done had I discovered everyone I met at Hedo on a dating app and not a nudist retreat.

Would I know from their pictures that they liked to get kinky in Jamaica? Would I assume that they would judge me, and in turn, judge them first, before even striking up a real conversation?

As a non-binary babe, I know firsthand how painful it is when people infer things about me (read: my gender) based on how I'm dressed. Sure, I try not to make assumptions about others. But I'd be lying if I said I didn't extrapolate all sorts of ideas about who someone is from a not-so-candid snap of them at their brother's wedding or apple picking with their friends.

While I think it's important to set boundaries and intentions about the type(s) of relationship you want, I'm going to start being less judgmental about the way I swipe. Because of Hedo, I want to learn more about the faces that flash on my phone screen. And I vow to take time to discover all types of complexities about the people I meet.

Hedo provides people with space to tell their own stories, and now, I'm challenging myself to do the same.