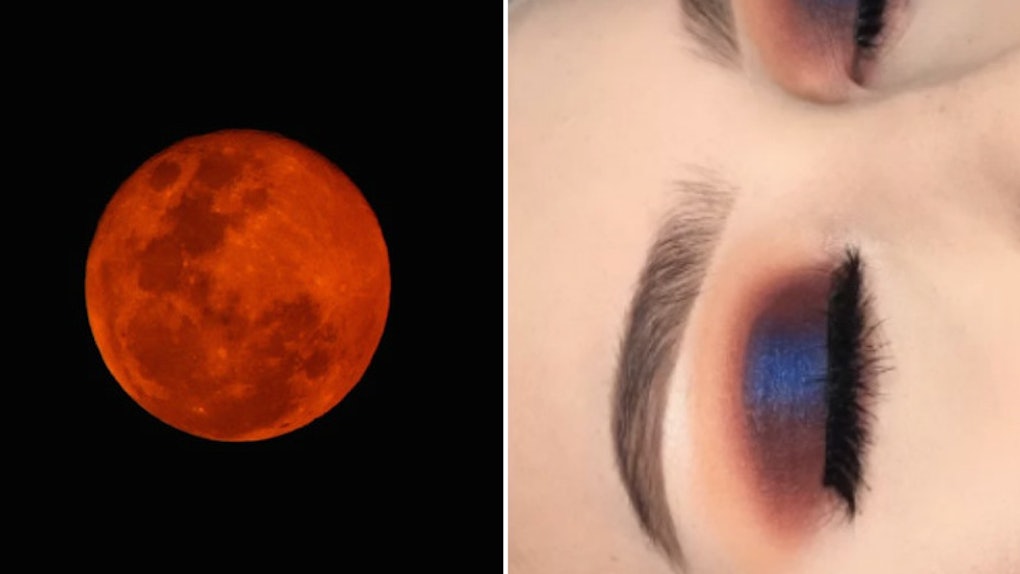 The Super Blue Blood Moon will honor us with its presence on Jan. 31. Though it might sound apocalyptic, this magical moon is just a sight too beautiful to behold. If you want to celebrate the sky in style, then try out these nine Super Blue Blood Moon makeup looks. You don't want the stellar moon to be stealing your thunder now, do you?

A "blue moon" occurs when we have two full moons in a month, which doesn't happen very often. The second full moon is a called a blue moon, hence the saying, "once in a blue moon." A "blood moon" happens during a total lunar eclipse. As the moon passes through the Earth's shadow, it will turn a reddish hue. Basically, the moon is going to be super big, super red, and super rare.

According to NASA, this is the first time three lunar events will coincide in over 150 years. Of course, you'll want to commemorate this experience with a heavenly makeup look.

Since we know the moon won't actually turn blue, it's still known as a Blue Moon, so let's start with some cerulean and cobalt hues, shall we?

You can rival the stars themselves with this super-saturated blue shadow and glitter liner combo. Seriously, the color combinations plus the gorgeous silver sparkly cut crease make this look magical AF.

If you're looking for something a bit more subtle (and perhaps a bit simpler), then this frosty blue lid is perfect for you. It still commemorates the spectacular lunar event in a way that says "yes!" rather than "YASSSSSSSSSSS!"

The neutral crease of this blue smoky eye perfectly grounds the bright pop of metallic blue shadow on the lid. When in doubt, a sensible nude, glossy lip with pair perfectly with a bright eye.

If you are not afraid to shine, then go ahead and rock this super bright blue lid with a neon green inner corner and glittery crease. Seriously, this look is not for the faint of heart, but it will shine just as bright and attract as much attention as the moon itself.

If you just want a little hint of blue, then this subtle smoke will suit you just fine. The blue hue is more of a navy, so the intensity will be subdued. Plus, by keeping the blue shadow only on the lid, its barely visible with the eye open, giving a nice flash of color as you flutter your lashes.

Maybe you want to rep both the blue and the red of the Super Blue Blood Moon. This halo smokey eye perfectly embodies the essence of this rare moon.

If the rusty red hues of the lunar eclipse inspire you the most, then opt for a red smokey eye over a blue one. The gold glitter in the inner corner provides the perfect sparkly touch.

If rust is too deep for you, then this true red eye will certainly wake you up. If you don't want to look like a vampire, then a nude lip is a must.

Perhaps you prefer subtlety in your glam? Wash a light rust hue over the entire lid, but make the look really sing with a burnt orange waterline.

Whether you're repping red or blue, the Super Blue Blood Moon is a sight worth paying homage to. Don't forget to snap a selfie of you and the sky on Jan. 31.