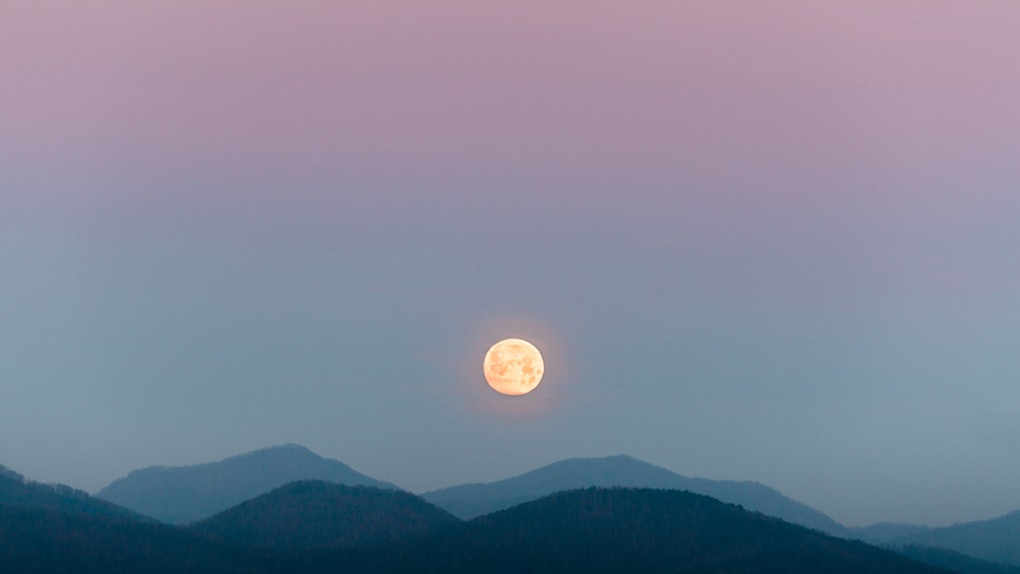 What Color Is The Super Blue Blood Moon Going To Be? Here's What To Know

I think we can all agree that early mornings when we've yet to have our coffee are the actual worst. We're completely in a daze and basically useless until we get our daily dose of caffeine. Our beds look extra comfy (Maybe just five more minutes?) and we'd gladly spend the day in sweatpants. But, when the Super Blue Blood Moon comes around, I promise you won't want to hit snooze. Instead, look up at the stars for a lunar show that'll be lighting up the night sky with a different part of the spectrum. What color is the Super Blue Blood Moon, you ask? Take one more sip, and then keep reading for all the science and such you need to know.

We've already been so #blessed with the best this year from our moon. The atmosphere has truly been going to infinity and beyond to give us something above average. We started with the Wolf Moon on the first of the year, and on Jan. 31 we'll send out the snowiest month of the year with the Super Blue Blood Moon. This celestial event hasn't happened in over 150 years, so you could say it's pretty rare. You'll want to plan a party for the planets and switch out that usual cup of Joe for some champagne. Toast your mimosas to the moon just for the occasion — and once again, don't sleep on something so cool.

We love you to the moon and back, which is why we're so dedicated to making sure you're educated (and quite literally woke) about this space show. Science can be draining, and you're already two cups deep so we'll try to keep it simple.

What is the Super Blue Blood Moon?

The Super Blue Blood Moon is best understood when you break it down a bit. A supermoon is when our circle is the sky gets a little bigger and brighter. According to NASA, when the moon is in this "super" state, it can look about 14 percent larger and 30 percent more luminous. The actual size of our celestial friend doesn't change at all in reality, thank goodness. Can you imagine the waves it would make after such a makeover?

A Blue Moon is a fancy term that tells us there has been two full moons during a month-long period. The common phrase "once in a blue moon" might quickly come to your mind, and it's not totally off base. Blue Moons truly only happen about four times every decade, so not quite as rare as the main moon event we're about to celebrate — but equally as rad. Despite its name, it's important to remember that the moon doesn't actually turn blue. We all go through our phases and get in our feels, but during this time the moon will still be shining as bright white as ever.

A Blood Moon is also just another vocabulary word to add to your lunar list. Where the moon does take on a more reddish color, the nickname is a more common way of referring to a total lunar eclipse. Instead of looking like wheel of white cheddar, the moon will look more like gouda (Anyone want a slice?). It's a natural phenomena that sends us residual sun rays floating in our atmosphere onto the surface of the moon, so that it looks something like a sunset. Call it a glow-up, and bring on the mac and cheese cravings.

So, when you put that all together you get one epic space experience — the Super Blue Blood Moon. Essentially, it's a larger Blood Moon. Now, take another sip. We're not quite done with the science stuff.

What color is the Super Blue Blood Moon?

The Super Blue Blood Moon, contrary to popular belief, won't be blue, red, or a combination of the two, aka, purple. Although a multi-colored moon might sound unreal in our imaginations (That would really give those tie-dye shirts from summer camp a run for their money.), the moon will actually take on that same sunset spectrum as a Blood Moon.

You can expect the surface to be spread with reds, yellows, oranges, and maybe even a little bit of pink. During this event, the moon will be falling completely into the Earth's shadow. But, according to timeanddate.com, some sunlight will still bounce back onto our lunar love thanks to our atmosphere.

The natural world really is full of wonder. Rise and shine — the moon does it everyday, so you can, too.