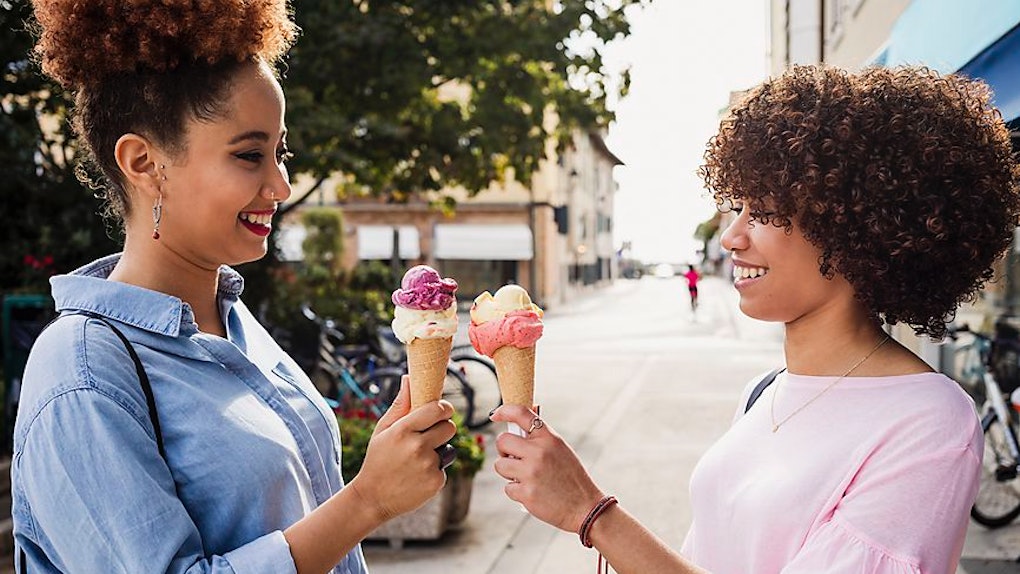 A little sister is a lot of things. She's your best friend, but sometimes, she can be a huge pain in the butt. She's your confidant and partner in crime. You take on the responsibility of setting an example for her, because she's your kid sister. When all is said and done, you wouldn't trade your relationship with her for the world. Kid sisters are the best, amiright? That's what we tell ourselves (OK, we really do love them!). All little sisters have a secret they might not outwardly admit: They actually really look up to us... like, a lot. There are just a few telltale signs you're your little sister's role model.

But, how do you know? Between the fights (because there are a lot of them), the stolen clothes, the shared hair products, and your identical annoyance with Mom and Dad at times, it can be difficult to tell if you're a role model or a punching bag. And the last person who wants to admit to you that you're the former is your sister -- that's a fact.

She can always hide it, as much as she may want to. These nine things she does are solid proof that she looks up to you, even if she doesn't want to admit it. That's what sisters are for.

Picture this: You're scrolling through Insta, casually seeing what's going on. Suddenly, you see a new picture your sis posted, paired with your caption from a few months ago.

Classic little sister move. Really, she just thinks you're super clever, and it's quite adorable.

2. She Trusts You Not To Spill Her Secrets

When she really feels like spilling her soul to someone, she comes directly to you. She trusts that you'll know exactly what to say, and she knows you won't tattletale to your parents. Even when you're fighting, you both know better than to share something the other one told in confidence.

3. She Comes To You When She Gets Her Heart Broken

When that stupid jerk breaks her heart, she comes running right to you. You might not always know what to say to make her instantly feel better, but she knows you're always there for a hug and a warm shoulder to cry on. After all, that's what sisters are for.

4. You Get The Lowdown On Her Life

Which friend is her new bestie? Who's the new kid at school she has her eye on? She spills all the tea to you, and of course, you listen, like the good sister you are. Even if it's excruciating at times, you're always there for her.

5. Your Closet Doubles As Her Shopping Mall

She knows just where to go when she's short on time and in need of a killer outfit. She might act like she hates your style, but you know that when she really wants to look good, your closet's where she goes running to.

6. Your Snapchat Streak Is Crucial To Her

She tries to play it cool, but she's actually really invested in keeping up her Snapchat streak with you. It's kind of silly, and she knows it, but she also cherishes any way she can to keep in touch with you.

7. She Looks To You For All The Advice

When she really needs advice, she runs to you. When she's in a fight with her friends, annoyed with Mom and Dad, or struggling in school, she knows you're only a phone call away.

8. She Tends To Not Leave Your Side

When you come home -- either from school or just for the holidays -- it's hard to get some space from her. She might say you're annoying, but really, she loves spending as much time with you as she can get.

9. You're Her Emergency Call

Maybe she's a little short on money, or maybe she just knows the fastest way to get a pizza is if you get it for her. She also knows you'll bail her out of any situation -- and she appreciates you for it more than you know (and more than she'll ever say).