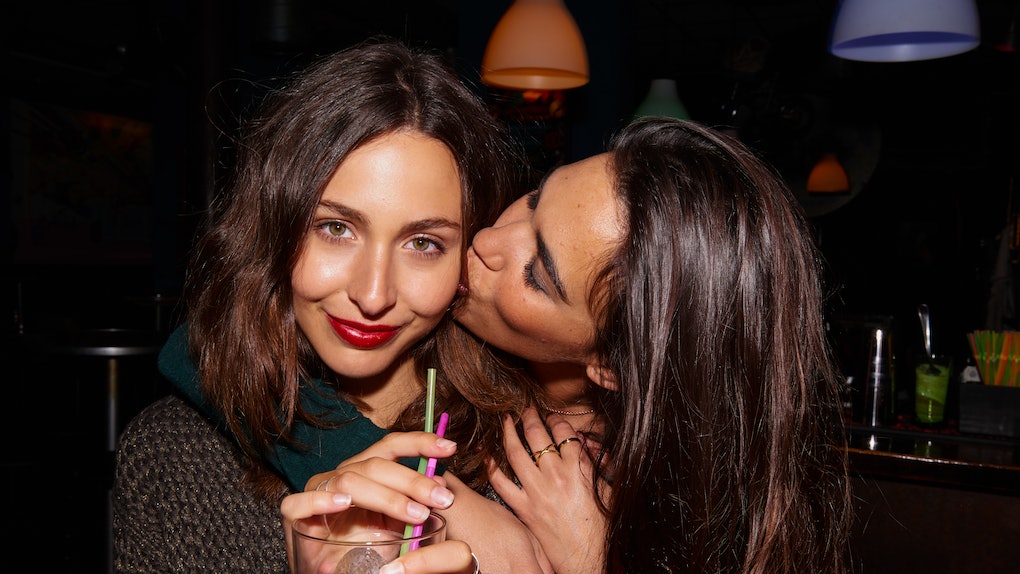 8 Women Share Tips For Asking People Out At Bars & Parties, Because Flirting Can Be Fun

It happened. After weeks of staying in and watching your favorite Canadian comedies (Schitt's Creek, ILY), your friends finally convinced you to put on a real bra and some eyeliner and go out. Like, out-of-your-apartment, maybe even out-of-your-neighborhood out. And, when you finally get there, after three subway transfers (let's be real: An Uberpool you overpaid for), you realize that you're surrounded by some major cuties that you'd be super into talking to, if only you knew how. If you're in the market for some tips for asking people out at bars and parties, look no further.

From breaking the ice with an innocent, "Do you know where the bathroom is?" to asking a cutie to take a picture of you and your girls looking super adorable, these tips for taking the plunge and asking someone out are totally helpful. Meeting new cuties can be stressful for everyone, but with a game plan in mind and a little self-confidence, you can totally relieve any potential nerves and get straight to flirting with new cuties.

I asked eight women how to ask someone out at a bar or party, and what they said will make you want to go out, like, tonight.

For me, parties are not a good place to make plans, but they can be a very good place to make contact. They offer good opportunities to engage someone you may not know or not know well in conversation. If everyone is drinking, I don't try to make concrete plans — someone is bound to probably forget. But my move is to get in each other's contacts, and then reach out another day with a simple 'Hey it was really great to meet/see you the other night, would you wanna grab a drink/bite some time this week?'

2. Put Your Best Self Forward

Trying to hit it off with someone at a party is just networking, basically. Put your best foot forward, share the best parts about yourself, look for common connections, and don't take it too personally if someone's not interested.

Honestly, if you see someone cute or you're having a good conversation with someone, just ask them to get drinks later that week. If they say no it's totally their loss, and if they say yes they'll probably be super into how you took the initiative.

4. Give Them A Subtle Touch (But Not In A Creepy Way!)

It's kind of a joke with my friends now, but we have a thing when you're out dancing or at a party and you think there may be something with someone else there, try to like gently touch their hand when you're dancing (in a very low-key, consensual, not grabby or grope-y way!!!) to signal that you'd like to dance with them. If they're not interested in dancing with you, clearly leave them alone and boogie on away, but if they're interested, you may dance the night into the morning.

If you make eye contact with someone or you catch someone kind of looking at you, just wave them over. They may think it's kind of funny, and it can be a great way to break the ice. They're probably nervous that you're not into them, so literally waving someone over is like a major green light.

6. Ask Them To Take A Picture

OK, my move is to see a cute guy and to ask him to take a pic of me and my friends. After he does, I can say I'm sending it to my mom who gave me the shirt I have on for Hanukkah or to our other friend who just moved away. It's an easy way to start conversation with someone without just being like, "Hi" to a stranger and you can let them see your funny and playful side when you're taking a silly pic with your girls.

For me, the best conversations/potential dates always come from just being like "Hey! How are ya?" or like "What's up with you?" Make the initial contact, and then you can go from there. You don't need to come to someone with a big line or a super insightful observation.

8. Ask Them A Question

Ask them a harmless question, like if they know where the bathroom is or if they have a bottle opener. Anything that let's them decide where they want to go with the conversation can be a great way to eventually get to talking more. Also, if they're not trying to talk to you, they'll just be like "I don't, sorry," and you can be like "No worries." It's not a big thing and you don't have to feel awkward if you bump into them again later in the night.

If you're making eyes with a cutie at a bar or you've been talking to a sweetie at the drink table all night, there's nothing wrong with going for gold. Asking someone out can be a super cute way to make a move, and doesn't need to be stressful at all. At the end of the day, you're a flawless angel, and anyone who isn't trying to go on a hot date with you is dead wrong.