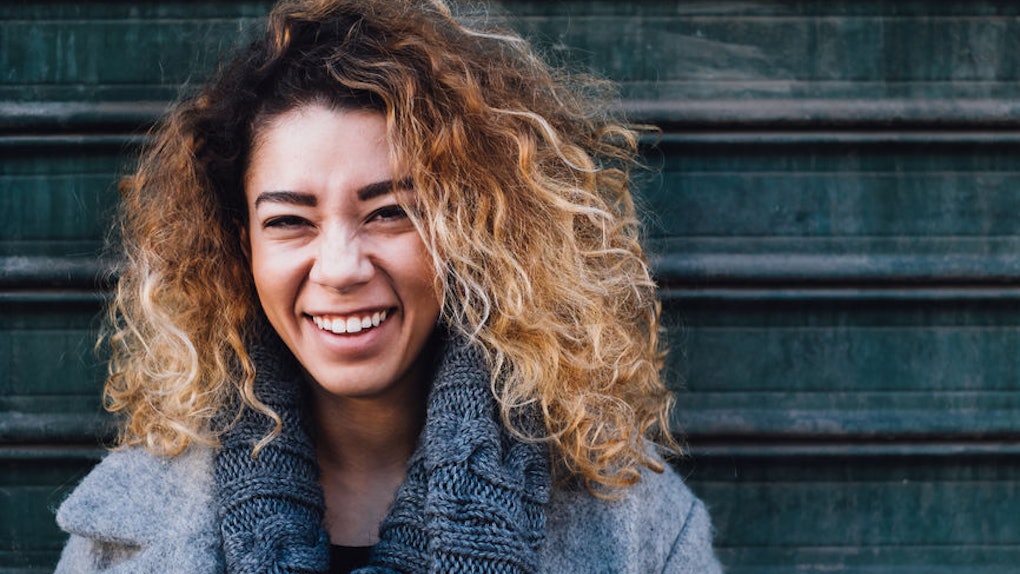 8 Ways To Bring More Positivity Into Your Life & Put Your Happiness First, According To Experts

Sometimes when I’m feeling a bit down in the dumps, I do my best Partridge Family impression and sing the lyric “come on get happy” over and over and over again. Granted, that doesn’t sound nearly as cool as canceling all my plans for the night to soak my troubles in a lavish bubble bath aesthetically fit for the ‘gram, but it does the trick. The way I see it, positivity, like happiness, isn’t a destination; it’s a journey. You need just as many little ways to bring more positivity into your life as you do glamorous ones, otherwise you’re destined to be moody more often than you’d probably like to be, right?

Besides, according to a new paper published in the Journal of Experimental Psychology: General, people tend to become more positive as they get older. Now, in theory, that sounds well and good, but TBH, it’s also really heartbreaking if you think about it. I know myself, and I definitely would have assumed the opposite: that the older you get, the less positive you become, due to the overwhelming amount of responsibilities that #adulting entails. But science rarely steers the universe wrong, and researchers from McLean Hospital’s Laboratory for Brain and Cognitive Health Technology have found evidence that suggests adolescents are less positive than middle-aged or older adults. IMO, we can do better, friends.

For their experiment, per McLean Hospital’s official press release on the study, researchers tested the emotion sensitivity of about 10,000 participants, aged 10 to 85 years old. Study subjects were shown a series of images of faces via TestMyBrain.com, and were asked to identify how the person in the photos was feeling (angry, happy, or fearful). The goal was to figure out which age group was able to a) accurately identify how someone’s feeling, and b) how the participants responded to each of these different facial cues.

After analyzing the participants' interpretations of the images they were shown, the researchers found that, overall, as you get older, you tend to become less sensitive to negativity; in other words, negativity just doesn't really affect you as much once you've nailed the whole #adulting thing. And according to Caroline Maguire, certified executive function and life coach and author of the book Why Will No One Play With Me? (who was not involved in the current study), that sounds about right.

“The more you know about yourself and understand the world around you, the happier you are, because you can anticipate and decode what you need and want,” Maguire tells Elite Daily over email. “As Shakespeare said, 'know thyself.' As we age, we tend to have our personal playbook in hand, so we know what makes us happy, and so we can put the little bumps in the road that life dishes up into perspective.”

Of course, that's a whole lot easier said than done, as your early 20s, specifically, can be an absolute whirlwind of a time, often full of changes, transitions, and adjustments. Maguire says this can certainly be daunting, especially because this is the time in your life when you're navigating the future.

At the same time, though, positive thinking can make this transition a little easier. So, to help you out, I reached out to a few experts in the space to share their best tips on how to be more positive. Here's what they had to say.

Positivity is an emotion, but it's also a thought, an action, and even a state of being. You know the age-old saying "change your mind, change your world"? Well, it's not just a cliché. According to Christy Whitman, a transformational leader, celebrity coach, and author of the book The Art of Having It All, channeling positive vibes at a time when you really don't feel positive can actually make all the difference. The trick, Whitman tells Elite Daily, is to think of yourself, and everyone else in the world, for that matter, as "energy towers sending out a signal all day every day, and that signal is communication that goes out to the universe as a vibration asking for what we want in our lives."

In other words, creating more positivity in your life means understanding that what you put out into the world is what you get back. If you're thinking positively, and taking positive steps toward what you want, Whitman says that positivity will come back to you in some way.

Stop Caring About Other People's Opinions Of You

I know, I know — easier said than done, right? But hear me out: As Amy Lombardo, certified empowerment coach, yoga instructor, wellness counselor, and author of the book Brilliance, tells me over email, there's a quote that puts a lot of this into perspective: “When you’re 20, you care what everyone thinks about you. When you’re 40, you stop caring what everyone thinks about you. And when you’re 60, you realize no one was ever thinking about you in the first place.”

It's pretty true when you think about it, right? When you're young, you tend to focus on how others perceive you, and sometimes you'll even try too hard to meet their expectations. But, as you start to grow a little older, and gain a little more life experience, you become more connected with yourself, and you value who you are and what you desire, rather than what others expect of you.

"We can create a life in alignment with that [knowledge]," Lombardo tells Elite Daily. "It’s much easier to stay positive when you feel like you are being authentically yourself."

Reserve Time To Just Play, Whatever That Means To You

Remember when you were in preschool or kindergarten, and the teacher would give you a few minutes of "playtime," where you could pretty much do whatever you wanted to do? Playtime might look a little different as an adult, but the concept of playtime remains the same: a time without purpose, to do and feel whatever, and however, you'd like.

"Without play, the very nectar of life can dry up," Lombardo says. "It could be drawing, dancing, painting, reading a book, or going for hikes." There is no "right" way to play, she explains. Do something that makes you feel unrestricted, free, and any feelings of positivity you might've lost throughout the day are guaranteed to rush right back.

During the holiday season, it's common to hear people encouraging others to "spread Christmas cheer," and, at least in my experience, it works like charm. So, why not spread positivity year-round?

To start, Lombardo suggests choosing one person each day who you can give three compliments to. Think of it as taking the practice of a gratitude journal to the next level, she says, adding that sharing, rather than just documenting gratitude, is an "infectious" energy. "It will not only make you and the other person feel better, but it will set in motion a chain reaction of positivity that will continue to ripple out throughout the day in unexpected ways," Lombardo tells Elite Daily.

Get Your Body Moving Any Way You Can

To quote Elle Woods from Legally Blonde, "Exercising gives you endorphins. Endorphins make you happy." And, naturally, happy people are generally positive people. But, trust me, you don't have to hit the gym every single day to stay positive (you could, but it's certainly not necessary).

Zumba education specialist, Gina Grant, tells Elite Daily that prioritizing physical activity can be as simple as parking your car a little further so you have more of a walk, hand-washing dishes instead of popping them in the dishwasher, or performing gentle stretches in front of the TV instead of lounging on the couch. However, if you do want to kick things up a notch and really get your blood flowing, Grant says there are plenty of options available to you.

"[If] the thought of going to the gym is too daunting," Grant explains, "try taking a brisk walk for 30 minutes during your lunch break, or a fitness class like Zumba, which is really more exercise in disguise because of the vibrant music and fun, judgment-free environment."

Find Value In The Little Things

Yes, I realize how cheesy that sounds. But, again, just because something is a cliché, that doesn't mean it's not 100 percent effective.

Similar to how not every self-care moment can be a grandiose event with bubble baths and champagne, not every source of positivity has to have an over-the-top "wow" factor. In fact, according to Susan Petang, a certified stress management and transformational life coach and author of the book The Quiet Zone, commonly overlooked details — like the way the sunlight brings out your BFF's gorgeous new highlights, the gentle swaying of leaves in the breeze, the rhythm of rush-hour traffic, or even artistic patterns on the walls or floors of your office that you never stop to think about — can all inspire positivity if you take the time to really appreciate them.

I know it might feel awkward, and maybe even a little inauthentic on the first few tries, but setting a mantra at the start of the day and repeating it to yourself in times of need can actually serve as a great nudge toward positivity. Personally, I love borrowing the mantra Gina Rodriguez mentioned in her 2015 Grammys speech, and repeating it to myself whenever I need that little extra boost: "Today is going to be a great day; I can and I will."

If that one doesn't quite work for you, New York City-based psychotherapist, Mia Rosenberg, LMSW, tells Elite Daily that your mantra can be as simple as whispering, "You can do it."

"Mantras are one of my favorite things ever," Rosenberg tells me over email. "Though they can feel awkward and uncomfortable, what is better than being your own cheerleader? This will help shift your mindset almost immediately."

Have A Dance Party Anywhere, Anytime

Some people aren't *into* music (which, if this sounds like you, please explain), and that's fine (I guess??), but if you can turn on a beat that makes your body move and lose yourself in that moment, Ava Johanna, an international yoga/meditation instructor and breath work facilitator, says that that, in and of itself, can give you a boost of positivity. "For an instant energy and positivity boost, I always default to a impromptu dance party to start the day," Johanna tells Elite Daily. "This usually looks like putting one of my favorite songs on max volume, pouring my cup of coffee, and jumping around the living room belting out the lyrics and shaking my hips."

Because the movement gets your heart racing, and the music shifts your mind away from worry, Johanna explains that "focusing on the present moment, simply by moving and connecting to the music," can uplift your spirits instantly.

More like this
Can I Exercise After A Flu Shot? Experts Recommend Listening To Your Body Post Vaccine
By Georgina Berbari
HomeGoods' Hideout Contest Treats You To A Relaxing Solo Getaway & Free Merch
By Marisa Casciano
Your Favorite Way To Escape From Reality, As Told By Your Moon Sign
By Roya Backlund
Stay up to date