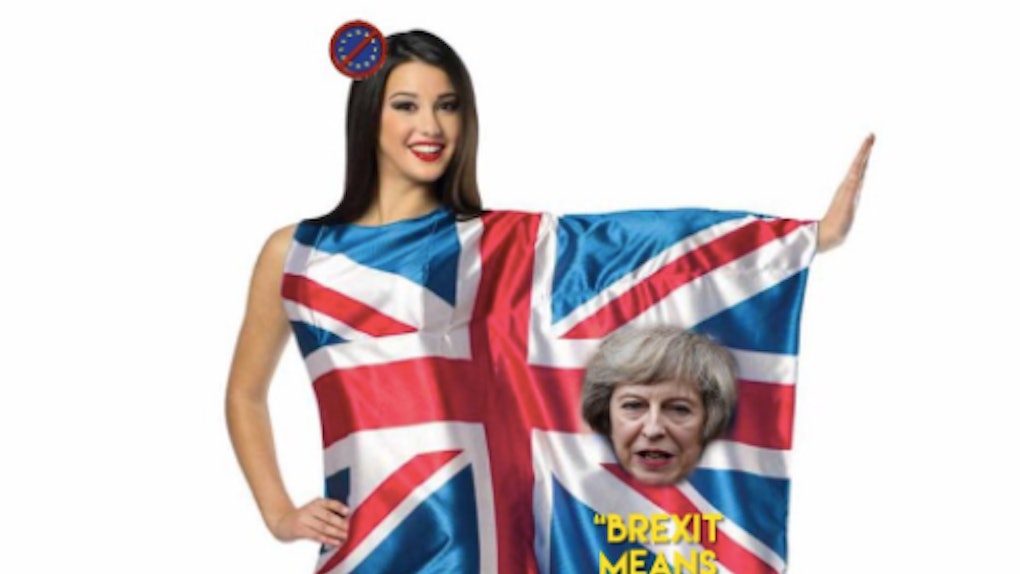 When it comes to Halloween costumes, I've always been a diehard silly costume kind of gal. From my life-size chicken suit to my Kramer (from Seinfeld, DUH) costume to an inflatable Sumo wrestler suit to, my personal favorite, a giant boob, I have mastered the silly costume game. When it comes to sexy costumes, though, my execution has never felt super natural. I tried being a "sexy" cat once in college, and it just didn't feel quite right. But a new post by Twitter user Summer Ray offered a list of eight sexy Halloween costumes that I could actually get behind.

I mean, don't get me wrong. I have absolutely adored every moment I spent in every single one of my hilarious Halloween costumes, but I didn't exactly feel sexy in any of the costumes. Weird that I wasn't able to feel sexy in a giant inflatable Sumo suit, I know. But the chance to look silly while simultaneously feeling genuinely sexy would be absolutely ideal. Warning to the more serious folks out there: Summer Ray definitely meant these costumes as a joke, but hey, what's stopping you from turning them into reality? It's Halloween, baby, ANYTHING GOES.

Check out the awesome ideas for yourself below.

Yes, you could be sexy and go for a hot rendition of any old dipping sauce for your Halloween costume. The other option here is to be funny and go as a life-size container of McDonald's fries.

But why not take the best of both worlds and and be a sexy McDonald's Szechuan dipping sauce?!

Who says you can't have beauty and brains... and also lure children into a sewer and eat them? As a "sexy" IT clown (get it? IT? Like the movie IT and IT like the people who solve all your tech problems?) you will obviously be sexy but also maintain a level of dignified intellect with the whole IT thing. And you'll STILL have the scariest costume around because people will be terrified that you'll murder them.

You could be a sexy little piggy if you wanted to go down that regular basic cute girl route. OR OR OR you could take your costume up a notch (or 97 notches) by referencing this viral tweet and being a sexy bröther.

Why be a boring, regular, sexy Trump when you could reference the time Trump visited Saudi Arabia, touched a glowing orb, and then Twitter had a field day about it?

When you first hear it, the word "Brexit" doesn't exactly scream sex appeal as much as it does terror for a lot of people. I mean, a "Brexit" Halloween costume? How would you even pull it off?! And HOW WOULD YOU EVEN MAKE IT SEXY?

Well, this ~topical~ costume idea lets you be the sexy Brexit you probably never wanted to be, complete with Theresa May and everything.

Looking for a HOT Halloween costume?! What could be hotter than a sexy apocalypse? HAH, get it?! It's literally hot because everything around us is burning up in flames.

Make a poignant commentary on what everything awful going in the world will lead to while also looking SMOKIN' HOT AND SEXY.

7. Sexy Pepsi can creating unity between police and protestors

Yes, Kendall Jenner probably regrets doing that commercial for Pepsi with every fiber of her being (because it was seriously so messed up). And please avoid actually dressing up as this for Halloween. It's just a humorous commentary on the severe shortcomings of our society — shortcomings that a can of Pepsi obviously cannot fix.

So yeah, if you're actively looking to this list for inspiration, maybe try the other seven costumes.

Ah, nothing like a hilarious commentary on Uber's failures in London that's also sexy.

All right, now, consider yourselves set for this Halloween. But I'm going to go ahead and guess you can't find these at your local Spirit Halloween Store, so I'd recommend you get started on that DIY project ASAP...