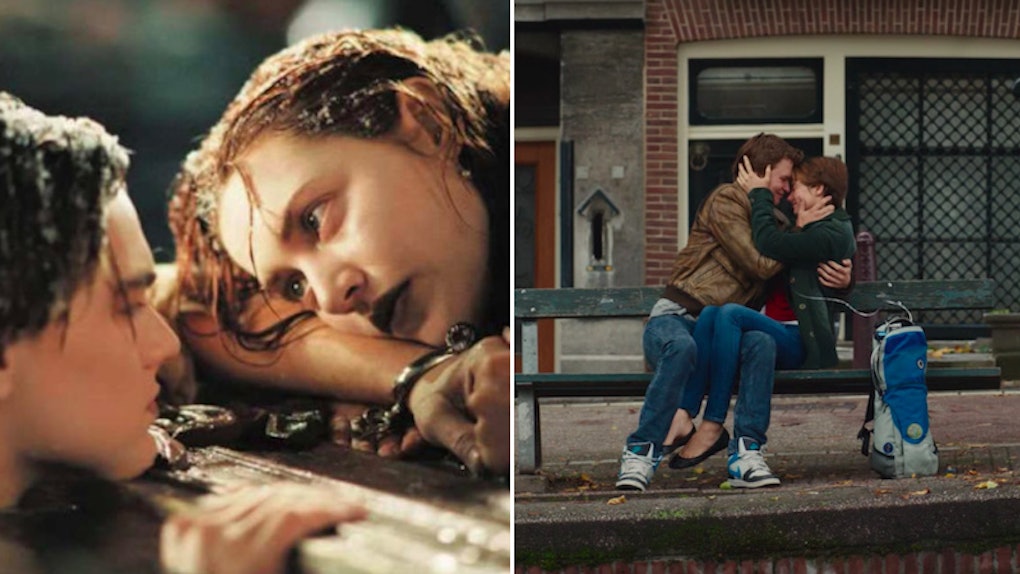 8 Movies That Will Make You Cry Even Harder Than 'Titanic'

There is nothing better than having a good cry during an emotional movie. It's amazing how movies can bring out a side of you that you only thought was reserved for real-life situations — the death of a loved one, breakups, when the wine bottle is empty, and so on and so forth. And, though it's hard to admit, sometimes you just need a good cry. So instead of breaking up with your significant other or (God forbid) polish off the last glass of wine, why don't you watch any of these eight movies that will make you cry harder than Titanic.

The next time you feel like weeping uncontrollably for no reason (or maybe for a few reasons, I'm not here to judge), grab your remote and settle down on the couch and binge-watch these movies. You'll be glad you did. And by "glad," I mean sobbing into your bowl of popcorn, but hey, that's what you signed up for, OK? OK.

I should warn you, though: This post *will* contain bits and pieces of these movies that you might not have previously known, so just keep that in mind.

This movie from 2017 is painfully sad. Based on an illustrated book by Patrick Ness, a little boy named Conor (played beautifully by Lewis MacDougall) — who is bullied at school because life is cruel — creates a "monster" (voiced by Liam Neeson) in his head that ends up helping him deal with the grief he feels over his mother's terminal cancer diagnosis. You will basically start crying within the first few minutes of this film... and you won't stop until long after it ends.

The good news about this movie? You'll laugh at parts. The bad news? YOU WILL CRY A LOT, especially after realizing it's based on the real-life love story of Kumail Nanjiani (who stars in the film) and his now-wife, Emily (played by Zoe Kazan). In The Big Sick, Nanjiani falls in love with Emily, much to the chagrin of his Pakistani family, only to end things when there's a bump in the road. But then Emily gets incredibly sick, and Nanjiani visits her in the hospital and ends up befriending her parents (who are not fans of him breaking their daughter's heart). You will basically melt into a puddle of tears throughout the entirety of this movie, but briefly pause to laugh every once in a while.

What are you doing if you haven't seen Call Me By Your Name yet? Actor Timothée Chalamet plays Elio Perlman, a teenager who falls for Oliver (played by Armie Hammer), the graduate student who interns for Elio's father. There is literally no way your eyes won't leak during this beautifully sad film.

The amount of tissues you'll need while watching The Fault In Our Stars is pretty much infinite. Shailene Woodley and Ansel Elgort play Hazel and Augustus, two teenagers who meet at a cancer support group and scheme to adventure around the world to meet their all-time favorite author. All while dealing with cancer. Believe me, you *will* feel things after watching this movie.

Hey, do you want to feel like you just got punched in the stomach? Go watch Moonlight, a story about a troubled young man (in three chronological stages of his life) who struggles with his sexuality in a tough neighborhood and a mother who is a drug addict. Yes, it is as intense as it sounds, and yes, it will GUT YOU.

It's only an animated movie, they said. It won't make you cry, they said. Well LOL, because they were wrong. Inside Out shows the literal emotions of a young girl named Riley who is dealing with a big move that brought her family far away from the home she loved. It's all very, very adorable, but when you are introduced to Riley's childhood imaginary friend named Bing Bong and then you subsequently see the lengths Bing Bong goes through for Riley... let's just say that you should never, ever underestimate the power of cartoons.

Jack and Ennis (played by Jake Gyllenhaal and Heath Ledger) are two cowboys who ultimately fall in love back in the 1960s in Wyoming. But of course, the two men have to hide their love, and it will make your heart hurt. When Jack tells Ennis, "I wish I knew how to quit you," I guarantee that you will be reduced to tears.

Come on, did you really think The Notebook wouldn't be on this list? I'll pretend like you've never seen the film (but I know you already have): An old man reads to an old woman at a nursing home, but what he's really doing is recounting the story of their young love. Ryan Gosling and Rachel McAdams play the young couple, and their tumultuous, back-and-forth, "I love you but I hate you" relationship will have you crying like a baby by the end.

More like this
10 Rainy Day Movies To Watch On Netflix That Are Perfect To Pass The Time
By Kristen Perrone and Lexi Williams
'He's All That': Premiere Date, Cast, Trailer, Filming News, & More
By Dylan Kickham
Here's How To Watch 'Promising Young Woman' For Free If You're A College Student
By Ani Bundel
Stay up to date