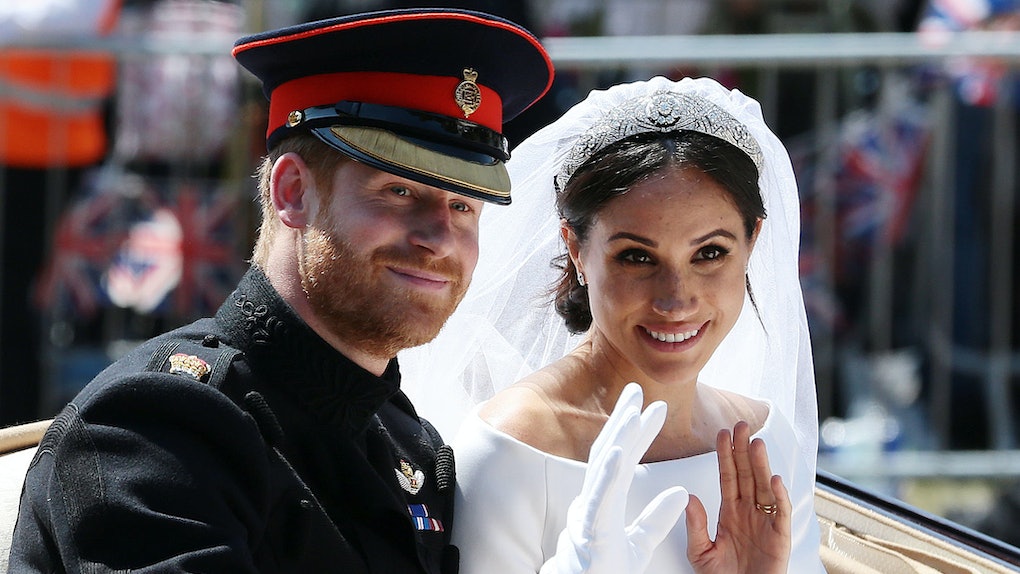 It's been over two years since Prince Harry and Meghan Markle tied the knot at St. George's Chapel at Windsor Castle in England, but Finding Freedom has some juicy new deets about the big day that even serious Sussex stans may not know. The new biography on the Duke and Duchess of Sussex — which was written by royal reporters Omid Scobie and Carolyn Durand — provides a fascinating look into the life and relationship of the royal couple, including never-before-heard details about Prince Harry and Meghan Markle's wedding. Spoiler alert: They're all super romantic. (In response to Elite Daily's request for comment on the book's claims about the wedding, reps for Harry and Meghan said, “The Duke and Duchess of Sussex were not interviewed and did not contribute to Finding Freedom. This book is based on the authors’ own experiences as members of the royal press corps and their own independent reporting.”)

Scobie and Durand claim Harry and Meghan were reportedly "joyful on the big day," which isn't a big surprise. The wedding day details provided by the co-authors are a bit more surprising, however. From the couple's pre-wedding road trip to their wardrobe issues, Finding Freedom offers insight into a day previously shrouded in secrecy. If you're curious about what really went down on May 19, 2018, then here are some of the most interesting tidbits about Harry and Meghan's nuptials.

They Reportedly Took A Road Trip The Day Before The Wedding

On May 18, 2018, the Sussexes were reportedly shuttled in a navy blue Range Rover up the Long Walk towards Windsor Castle for one final look at their wedding venue before the big day. As Scobie and Durand claim, "Crowds had already gathered in the small English market town ahead of the grand spectacle, and hundreds of broadcasters from around the world were already set up to capture what were sure to be magical moments."

Meghan Reportedly Had Breakfast With Her Mom On The Big Day

The morning of the wedding, Meghan was reportedly woken up at 6 a.m. to start getting ready, but luckily, that also gave her time to have breakfast with Doria Ragland, her mother. "...trays of cereal, fresh fruit, juices, and tea were being wheeled into her suite, where she had breakfast with her mom," the royal reporters claim. They were also reportedly joined by Meghan's dog, Guy, as well as her close friend and makeup artist Daniel Martin, who reportedly told Scobie and Durand it was "a very chill morning."

Clare Waight Keller didn't just design Meghan's wedding dress — she also reportedly helped Meghan with the gown on the big day. Since Meghan didn't have a maid of honor, the then-artistic director for Givenchy reportedly rode ahead of the bride and met her on the West Steps of St. George's Chapel in order to arrange Meghan's sweeping train. Keller reportedly told Scobie and Durand that she and Meghan "met many times" before the ceremony to discuss "'what she wanted to represent'" and "'what emotions she wanted to portray'" on her wedding day.

The Bishop Reportedly Didn't Meet Meghan & Harry Before The Wedding

Rev. Michael Curry, the presiding bishop of the Episcopal Church in the United States, was tapped to deliver a sermon during Harry and Meghan's ceremony, which — according to Finding Freedom — he definitely wasn't expecting. "The Bishop, who had never met the couple, was very surprised when he received a call from the Archbishop of Canterbury's office. And he was floored when he learned he was to preach at Harry and Meghan's service. 'Get out!' was his shocked response," the royal biographers claim. Even though he reportedly didn't meet Harry and Meghan until they stood at the altar, Bishop Curry reportedly told Scobie and Durand that the couple's "love was palpable."

Harry Reportedly Had A Hilarious Complaint After The Ceremony

According to Scobie and Durand, the Sussexes had very different reactions when they stepped out of St. George's Chapel and into their carriage after the ceremony. Seeing the crowds, Meghan reportedly lifted her hand to her chest and said, "'Wow!'" Harry, meanwhile, reportedly "laughed that his trousers were 'too tight.'"

Meghan Delivered Her Own Toast At The Reception

After the ceremony, Harry and Meghan reportedly rode to Frogmore House for the reception, where many guests reportedly "slipped out of their heels in favor of the white cushioned slippers provided for comfort." Harry was reportedly the first to speak, but according to the royal reporters, it was Meghan's speech that really stole the show, as she was the first royal bride to ever deliver a toast. "'You could literally hear a pin drop,'" an insider reportedly told Scobie and Durand. "'For her to have been quiet for as long as she had, and then have this really safe space where she could give these heartfelt remarks, it was a really special moment.'"

Their First Dance Song Was Reportedly So Romantic

According to Finding Freedom, the Sussexes reportedly chose the song "I'm in Love" by '60s soul singer Wilson Pickett for their first dance.

Their Honeymoon Is Still A Mystery

Scobie and Durand claim the royal couple spent the majority of their weeklong honeymoon "in the sun," but the vacation spot was so private that "most of their friends still don't know where they went."

Though I'm still bitter I wasn't invited to the big day, reading all these secret details about the royal wedding from Finding Freedom feels like the next best thing.