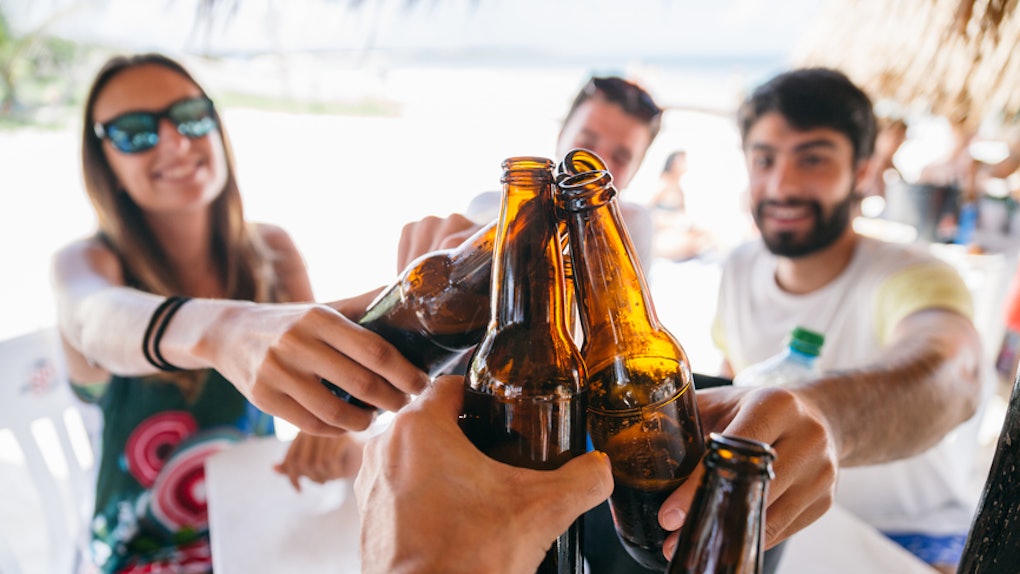 February is bringing us the 2018 Winter Olympics, and you know that means? It's time to host your very own type of Olympics with your friends. What kind, you may ask? Beer Olympics. It's a fun party-type atmosphere with brews galore, plus you get to play some fun, yet highly competitive, games with your best friends. That's the absolute best of both worlds right there. But on top of thinking up fun games to entertain your party-goers with, you should definitely focus on Beer Olympic party ideas that will give you the "Best Hostess" title for years to come.

Obviously, this is for the 21 and up crowd and should be moderated to ensure a safe, fun time where no one drinks too much. But, it is definitely a fun party to have considering the PyeongChang Winter Olympics are just around the corner. Party planning for this event will be extensive — you have to make sure you have more than enough beer (because you can't run out of beer at The Beer Olympics) and you should have a few referees to monitor the games, as well as having a list of what you're going to be playing. Some game ideas include good 'ole Beer Pong (obviously), Kings, Flip Cup, a Shotgun Relay, and Dizzy Bat. Once you have the essentials all figured out, choose your theme and have fun!

This one is pretty simple and traditional, yet still fun. With this one, each team is assigned a different country and dresses accordingly. While being respectful to said country (no cultural appropriation, please and thank you), you can dress up in the colors of their flag, have their national anthem played while they walk out during the opening ceremonies (and when they win), and have some country pride when you rock the competition.

For this theme, designate that half of the teams dress up as Winter Olympics and the other half do Summer Olympics. This allows each set to get creative (so they're not all wearing the same exact thing).

This theme doesn't even have to do with the Olympics themselves — they can dress up in attire that corresponds with the seasons. That means, for example, Ugly Christmas Sweaters, ski gear, and parkas for the winter side, and swim suits, pool noodles, and flip flops for the summer side.

Choose some Olympic events (one for each team you're having) and give one to each group. Since the Winter Olympics are the ones coming up, you can easily go with a ton from there. If you are having a huge party with a ton of teams, either give duplicates out, or you can do half winter sports and half summer sports. Ideally you'd have the popular ones like figure skating, skiing, and bobsledding, and you can even assign ones like curling.

This one is also for the more adventurous and involves a bit of artistry. Assign each team a U.S. city that has hosted the Olympics in the past and have them dress according to that place. The six cities are: St. Louis, Lake Placid, Los Angeles, Squaw Valley, Atlanta, and Salt Lake City.

So for St. Louis, you could potentially all wear Cardinals gear and someone can be the arch, whereas for for LA, you can be a celebrity or the Hollywood Walk of Fame. There are a ton more things you can do with these as well.

This one will be a big 'ole toga party, which is easy and cheap to shop for. Get some bed sheets and go all out. You can give each team a color and they can use that to define who is with who by using it to accent something (like shoes, a headband, or something funky like sweatbands or a head wreath in that color). Or, they can tie-dye their toga.

This one is like the previous one, but it takes it one step further. Give each team a different Greek god or goddess, and that's their theme! One can be Aphrodite, the Greek goddess of love, and another can be Athena, Greek goddess of wisdom and war strategy. With that, they can go ham on how to dress accordingly.

This is is so fun and can make for some great Instagram pictures. Give each team a different district from Panem, the fictional country Katniss Everdeen and Peeta Mellark live in The Hunger Games series.

If you don't already know, each district is known for something, and you can dress up in their theme. For example, District Three is technology, so dress all futuristic or with gadgets, District Four is fishing, so pay homage to fallen soldier Finnick Odair (RIP) by wearing some fishnets, and District Nine is grain, so bring a lot of bread, which is also a good thing to have on hand for snacking (you can also bring bread if you're District 12 to honor Peeta, but my fragile fangirl heart doesn't want to go there). This is the second most fun idea, only to the last one.

For this one, you can be super nerdy and super extravagant. You can assign each team anything from Star Wars, to Harry Potter, to Twilight; the possibility are truly endless. You can go with The Hunger Games to fuse ideas eight and nine together, and you can certainly include any and all superheroes (one team can be DC and one can be Marvel, which will really be a battle for the ages). Or, you can do only Marvel superheroes and recreate Civil War.

This will easily be a favorite and make you the favorite friend. You will definitely get you hosting privileges from now on.