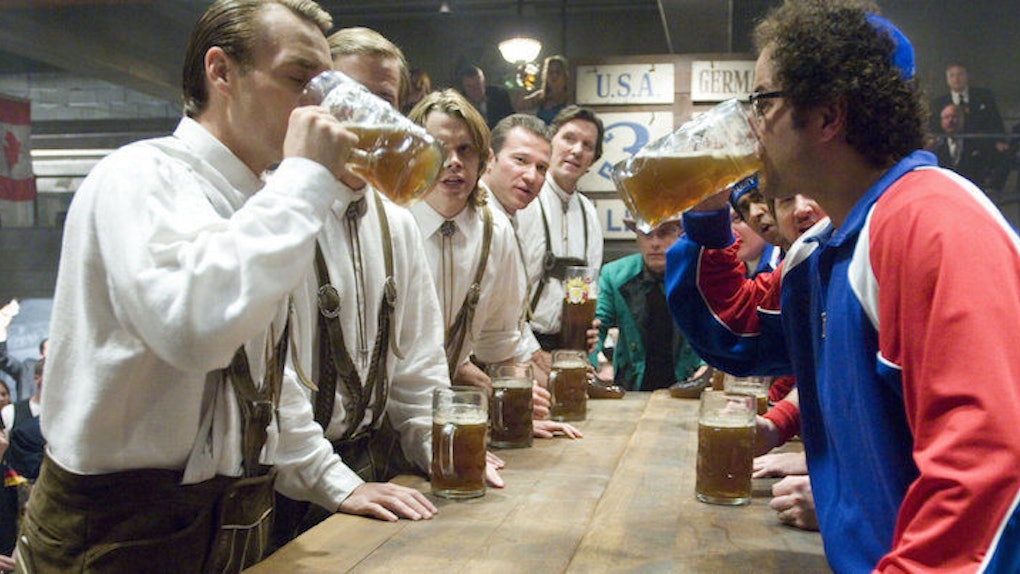 Not just anyone can host a Beer Olympics.

It takes dedication, perseverance and the impossible skill of getting your friends to match each other at a party.

It might just be too much to handle for some of you, and that’s okay.

However, if you think you’re up for the challenge, read on to see how to host the best Beer Olympics ever.

You will need to have even teams, so people need to RSVP for this to work. This means you can’t just create a Facebook event and hope for the best.

Facebook invented that "maybe" button so wishy-washy Millennials like your friends can wait up until the very last moment to bail on your shindig.

The week leading up to the party, make sure to shoot a text to those undecided folk and get a final number.

I also had one friend who didn’t want to drink be a ref. If you can get a ref, I would advise you to.

Each team represents a different country.

America is always one of those countries, and you, as the host, should probably be on that team.

Try not to pick countries with all the same colors.

Now, you know your friend group. If there are some who are better at drinking beer than others, be sure to evenly divide them.

I will never say to make sure there is the same amount of women on each team because I know some women can out-drink dudes easily.

Once you pick teams, let your friends know so they can wear their colors to the party. I like to make this a smaller party with about 20 people, tops.

This is up to your discretion.

The two songs that need to be included are “America F*ck Yeah” and “Das Boot.”

You will see why when you read the later instructions.

You can do as little or as much of this as you want.

When I hosted my party, I bought streamers (which were relatively cheap) and some poster board.

I also went to the dollar store and got tiny medals for the winners and a whistle for the ref. The ref would card us if we broke the clearly displayed rules.

I bought all the beer because I didn’t want people showing up with different types of beer.

This way, everyone was on the same page for the entire night. I had people just throw me some cash.

Also, you will need cups and pong balls.

6. Make sure you look killer.

You’re throwing this thing, so have fun.

Go all out in your gear for your country.

How to play: The commitment contracts would just be posters with the names of each team.

At the beginning of the games, I had each person announced. They all signed the contract and took a shot.

This is a good way for teammates who might not know each other to learn each other's names, and it's a really fun way to start off the night.

How to play: You start out playing flip cup with six people on each team.

When one team loses, they have to vote a player off the team, but keep the same amount of cups.

This works down until one of the teams run out of players.

How to play: Each team will set up four cups in a straight line in front of them. There will also be a cup on the side representing the bases.

Teams will take turns “batting” by trying to get the pong ball into the cups across the table from them.

If you make it into the cup closest to you, that’s a single. Behind that counts as a double, and after that is a triple.

If you get it into the cup closest to your opponent, that’s a home run. If a player shoots, and it doesn’t hit a cup, that’s a strike.

If a player shoots, hits a cup and the opposing team catches the ricochet, that’s an out.

Now, once you get on base, you will stand by the cup to the side and have the opportunity to steal. The defending team will have a person off to the side, ready to catch you stealing.

If you are on base (at the side cup) and think the defense isn’t paying attention, you can chug the cup and flip it.

The defender will also try to chug his or her cup and flip it to get you out.

If you successfully flip your cup before the defender, the base is stolen.

I would advise having the ref keep track of this, just to make sure the game is fair.

How to play: This is essentially a giant beer pong game. You will have three versus three to start out. They will be across from each other, longways at the table.

Each person has three cups in front of him or her.

You want to get the pong balls into the cups across from you. The play is continuous, and fighting for pong balls is encouraged.

Once all three cups are knocked out, that teammate is out, and another steps in to set up three more cups.

This continues until one team eliminates all of the other team's players.

How to play: The teams line up behind each other.

The first player bounces a pong ball into the first cup and chugs it. He or she runs to the second cup, drinks and flips it.

Then, he or she runs to the third cup, chugs it and shoots the pong ball.

This ball is aiming for the first cup he or she drank out of, which one of the teammates has refilled.

The teammate who is next in line is responsible for refilling the cups and rebounding until the teammate shooting makes it.

Once it is made, the next teammate begins the process all over again.

This continues until everyone completes the relay race.

We then had a good old chug-off tie-breaker if it was necessary.

With one beer and two of the best players, it all comes down to a few rules.

So, there you have it: an extensive list of rules and games that can be played at your next Beer Olympics.

Make us proud, champ. Have a great time.