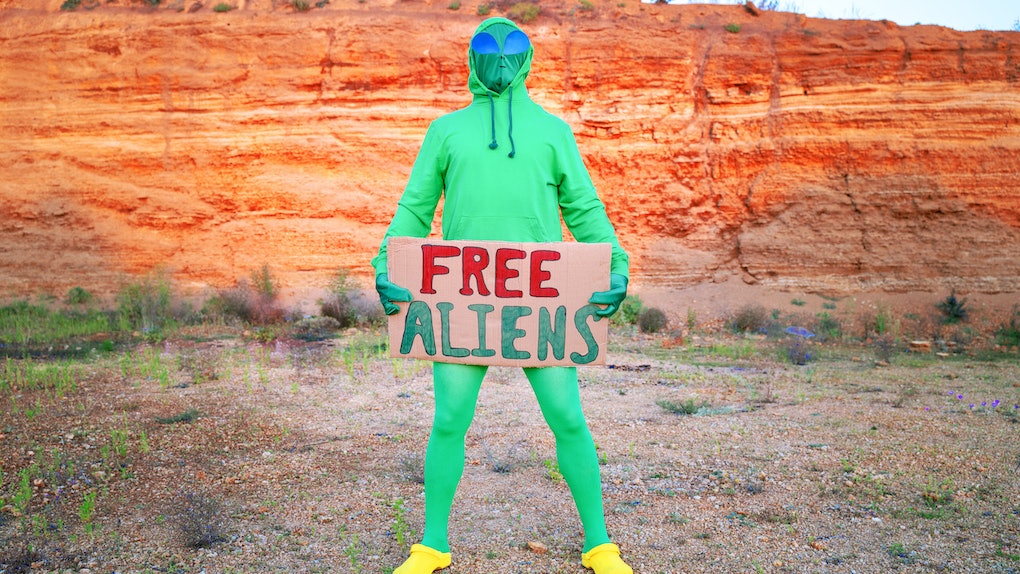 When is a better time to sum up a year in memes than Halloween? 2019 has been a great one for memes, too. It's perfectly acceptable to wear a costume shout-out to your fave meme of the year, plus it's the best way to make your squad laugh. If you're going for a humorous costume a well-known meme is a solid way to do it. Some meme-y costumes have already dropped, and since it's getting really close to Halloween, you better get on it. These last-minute meme costumes for Halloween 2019 will have you ROTFL. Some of these costumes are minimalist, but all of them are super fun ideas that might even win that costume contest. Plus, you may have something in your closet you can include that works with one of these perfectly.

The key to a last-minute costume is fast shipping, so as of publication, the following costume ideas are all available to be shipped to your door as soon as possible. Since Halloween falls on a Thursday, you'll probably be taking Halloween all the way through the weekend. And if you don't have a costume yet, or if you just want to switch it up for Halloweekend No. 2, then these costumes are perfect for you.

This is probably one of the weirdest things you've seen all year. The egg-photo-turned-viral-sensation became a series of memes due to the fact that it beat out Kylie Jenner's amount of likes. What does that mean for our society? It's just epically hilarious.

The World Record Egg costume is simple. If you're in a crunch for time and don't want to spend a ton of money, plus would rather be comfortable in a tee shirt, why not support the egg memes? Pair with comfy leggings, or if you're really a dare devil, you can try to twin Kylie while wearing the egg shirt.

Keep it simply and attach a paper cutout of a yellow egg to a black tee with hot glue.

Remember when someone started an event on Facebook and all of the sudden like two million people were planning to attend and "Storm Area 51" to search for aliens? What became a viral sensation, then became a potential crisis... and finally, a boatload of hilarious memes about finding aliens, is still as funny as it was at its initiation.

This costume is cute, cozy, and you can pair it with a cardboard sign that says #StormArea51, free aliens or I found the aliens.

Of course, SpongeBob SquarePants memes are always, always a thing. But this year one of the trending ones happened to be Larry the Lobster lifting weights. Why, you ask? I don't think anyone really knows. It's just the endless cycle of amazing SpongeBob memes.

There are plenty of "observe" meme variations, but some of the best are totes relatable.

I mean, for real, sometimes you can. I'm sure you've all felt it.

YouTube user Doctor Duke even made a compilation video with some of the best Larry the Lobster "Observe" memes and that is a joy, despite the weird monotone robot voice.

All you really need is a clue to let people know you're a lobster, and this hat should do the trick.

Pair it with a red track suit, and people should definitely get what you're going for.

Pair the lobster costume with an inflatable barbell and go around telling everyone to "observe" all night. Or opt for a way to have "observe" featured with your costume. Write a sign, write observe somewhere on the barbell — get creative with it.

This one was probably one of the most well known series of memes of Summer 2019. According to an article from Vox, Hot Girl Summer started mainly from fans taking off with Megan Thee Stallion's own comment. She called herself "H-town hottie" and "Hot Girl Meg," which eventually led to fans creating their own posts about being a "hot girl" which turned into Hot Girl Summer.

In Megan Thee Stallion's interview with The Root, she gave more of an explanation of what it really means to have Hot Girl Summer. “It’s just basically about women — and men — just being unapologetically them... hyping up your friends, doing you."

Hilariously, some of the best memes were from people who felt they were failing at Hot Girl Summer. One of the notable points were from girls who were trying to live an independent Hot Girl Summer and then were texting their SOs.

Pair this cute, easy yellow crop top with a pair of high-waisted shorts and channel your #HotGirlSummer this fall.

This meme is absolutely hilarious. If you aren't aware of exactly how this meme started, it came about a few years ago, but has circled back. For whatever reason, it was a big meme moment this year. Thanks to Jasmine Masters, best known from Season 7 of RuPaul's Drag Race, who made the hilarious "And I oop" comment after a slight mishap in the YouTube video titled "Jasmine Masters handle your liquor," one of the best memes ever has come about and I hope it doesn't ever disappear. The video itself is a good laugh, as Masters throws some serious shade telling a story. But later in the video, after 4 and a half minutes have passed, there is a moment where Masters exclaims, "And I... oop!" for a little problem during filming. And it became a meme, just because it's literal gold.

You can have an "And I oop" Halloween costume and rep your inner Jasmine Masters with a blue kimono and your choice of bottoms and some long, statement earrings. Of course, you kind of need to glad your makeup for this one, so that'll be the most time-consuming part.

The Kim Kardashian making a phone call meme came from an actual phone call she made on Keeping Up With The Kardashians. Her reaction on the phone was humorous enough to prompt memes... and of course, Kim K is one who is definitely very meme-able, whether it's because you can relate, or her reactions always appear really extra.

And just for kicks, enjoy the video version.

This costume is literally the easiest thing ever. Buy a fluffy white bathrobe, do you best version of Kim K, and walk around on your cell making a dramatic face.

Maybe you don't have the hair, but you can still pull off a Bob Ross meme costume in a flash. These memes have had a history of floating around for years, but TBH, they just never get old.

There are so many of them. Always. But I suggest going with "happy little trees" and throw together a costume with a paint palette, a wig, and a beard.

If you already have a blue collared shirt, throw it on. If not, pair your look with whatever light-colored plain shirt you have. Believe me, your costume won't be in doubt just because your shirt is off a shade or two.