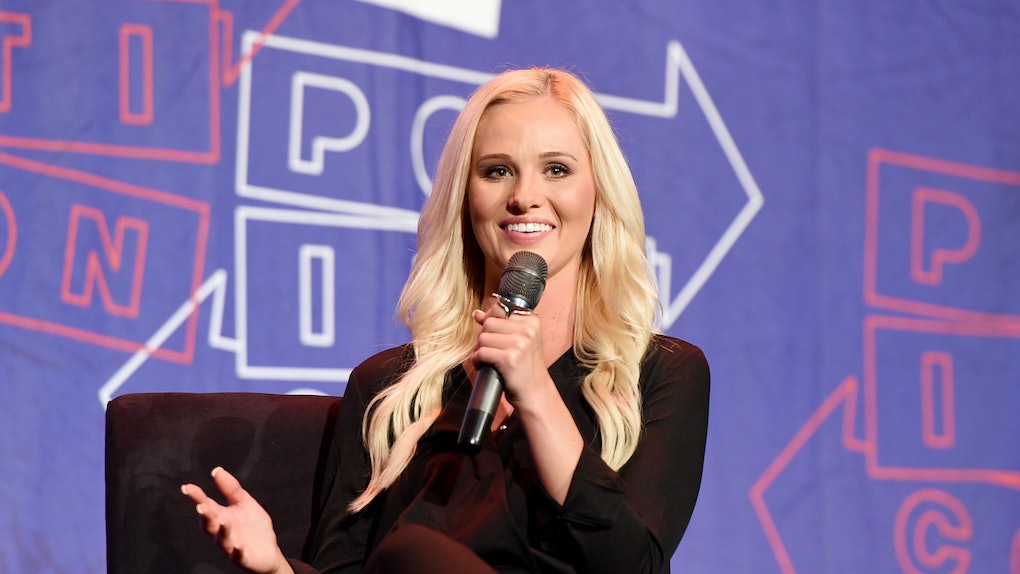 6 Tomi Lahren Quotes That Got Her In Trouble

Tomi Lahren is many things: pundit, blonde, fast-talking, conservative. One thing she is not? Careful with her words. The blonde is no stranger to controversy, most of which she, you know, invites upon herself. These Tomi Lahren quotes have all gotten her into trouble, and will tell you everything you need to know about why a fast tongue isn't always a good thing.

The Fox News correspondent made a name for herself on Glenn Beck's network TheBlaze with her uber-shareable "Final Thoughts" segments, quick, punchy videos chock full of conservative talking points like why "left-wing feminists" aren't "real women." Of course, that was before being fired unceremoniously for accidentally revealing she's kind of pro-choice.

Lahren has no shortage of opinions, on everything from birth control to Black Lives Matter to health care, and while she has quickly become a darling of many conservatives, a lot of her opinions and actions have also gotten her into trouble — and have even earned her the moniker White Power Barbie.

Here are some of the worst offenders to come from the conservative pundit's mouth.

On Nov. 13, an ad for ring-wing nonprofit "youth organization" Turning Point USA, featuring an eyebrow-waggling Lahren, was released, stating, "Dear liberal snowflakes, Nothing is free; crying doesn’t solve problems; screaming doesn’t make you right; not everyone is a winner; there are no ‘safe spaces.'"

This "liberal snowflake" insult is par for the course for Lahren, who dedicated one of her "Final Thoughts" segments to snowflakes.

Only days before the ad was released, many conservatives recorded themselves destroying their Keurig coffee machines after the company criticized Fox News host Sean Hannity — who had, at the time, defended Roy Moore, who has been accused of child molestation and preying on teenage girls (Moore has denied the allegations). As Twitter has pointed out, you don't get much whinier than breaking a $120 coffee maker for disagreeing with your politics.

Not exactly the moral — or emotional — high ground Lahren claimed to stand upon. Which is, perhaps, why Turning Point deleted the original tweet.

During a debate with fellow opinionated blonde Chelsea Handler at Politicon this summer, Lahren tackled what she has previously called the "sack of sh*t that is Obamacare." She told Handler that it is "not working." She said, "I think you increase competition, I think that's the way to do it. … I think that the free marketplace is better."

The only reason the then-24-year-old was able to use her parents' health plan is because of the Affordable Care Act, aka Obamacare. One of the key provisions of the law allows young adults to stay on their parents' health insurance until age 26.

This might be one of her more embarrassing gaffes, if not one of the more offensive ones, not least of which because she prides herself on explaining the world to ignorant "snowflakes" and being knowledgable about how the government actually works.

One could even argue that it's deeply embarrassing to have such a deep misunderstanding of a policy that directly affects her life.

During a March 2017 appearance on The View, Lahren came out as pro-choice by comparing a woman's right to choose to the right to bear arms. Which, OK, privacy. I mean, sure, one thing is a human being and one thing is an inanimate object. But sure, I guess.

This enraged conservatives, for once, and, she claims, she was fired from TheBlaze as a result.

Lahren has made it a point throughout her career to say that she is decidedly not a feminist, which is why this little revelation got her into trouble. After all, what is feminism if not the fight for equality — a core tenet of which is bodily autonomy, or, the right to choose what one does with their body.

Since her appearance, which led to think pieces about whether or not she's really a conservative on far-right blogs like The Rebel and threatened her budding career, she spent a significant amount of time trying to walk back what she said on the daytime talk show, including clarifying that she is personally against abortion.

"I’m a Republican, and I can buy my own womanly things!"

In a 2015 "Final Thoughts" on Hillary Clinton and her brand of feminism, Lahren said that Clinton doesn't represent her and millions of other women who don't need "government handouts."

She said, "I'm a Republican, and I can buy my own womanly things!" Yes, Lahren can afford her own birth control, tampons, and more. Her ability to pay for her own stuff is part of her limited government, bootstraps ethos.

The young pundit brought up this take-care-of-yourself line of thinking yet again in a 2017 interview with Marie Claire, wherein she said that her birth control costs only $9 without insurance. Who couldn't afford that?

Well, people pounced, for several reasons. She was, in all likelihood, insured thanks to Obamacare at the time, which included a birth control mandate to make contraceptives affordable. So her birth control was likely cheap because of a policy she says she hates.

Her comments spawned think pieces like Glamour's article on whether or not Lahren actually knows about how birth control works.

And she was so far off the mark that people still make fun of her for it, months and many tone-deaf comments later.

In a now-deleted tweet on July 8, 2016, Lahren wrote, "Meet the new KKK, they call themselves 'Black Lives Matter' but make no mistake their goals are far from equality. #Dallas #bluelivesmatter."

It was a response to the ambush shooting of 12 Dallas police officers — five of whom died. The incident happened at a demonstration over the deaths of two black men who had been killed by police in Louisiana and Minnesota in the days prior.

Lahren's tweet, which she deleted after an enormous backlash — including a verbal knock-down while appearing on CNN — compared a modern political movement trying to highlight systemic racism and advocate for black Americans to a terrorist organization whose main goal was promoting white supremacy. The KKK, at its height during Jim Crow, terrorized and murdered black Americans. In contrast, BLM holds street protests and other actions to highlight how dangerous it is to be a person of color in the United States.

Her comments led to a Change.org petition with more than 62,000 signatures, demanding she be fired from then-employer TheBlaze, and tons of angry tweets.

For Halloween, Lahren was... well, I'm not quite sure what she was, but there were lots of stars and stripes, which she proudly posted on Instagram. Rocking an American flag fanny pack, a MAGA body suit and what looks like American flag... wings? A cape?

Her caption read, "What am I? Well if you’re a conservative, I’m American AF. If you’re a lib, I’m 'offensive.'"

Lahren has spent a lot of her time discussing patriotism and respect for the nation and the flag, particularly in relation to NFL anthem protests, wherein she has said that protesting during the National Anthem is disrespectful to the flag. She has even said that "the flag is bigger than you and your temper tantrums."

Buuuuut, her costume, as many, many people gleefully pointed out, violates the U.S. Flag Code.

It also doesn't quite make sense.

Geez, Tomi, not very respectful, is it?

Perhaps she invites some of the controversy. After all, every time someone tweets about Tomi Lahren, she gets that much more attention, which she has handily turned into a lucrative career based on owning libs. But still, you gotta admit. She's kinda the queen of the self-own.