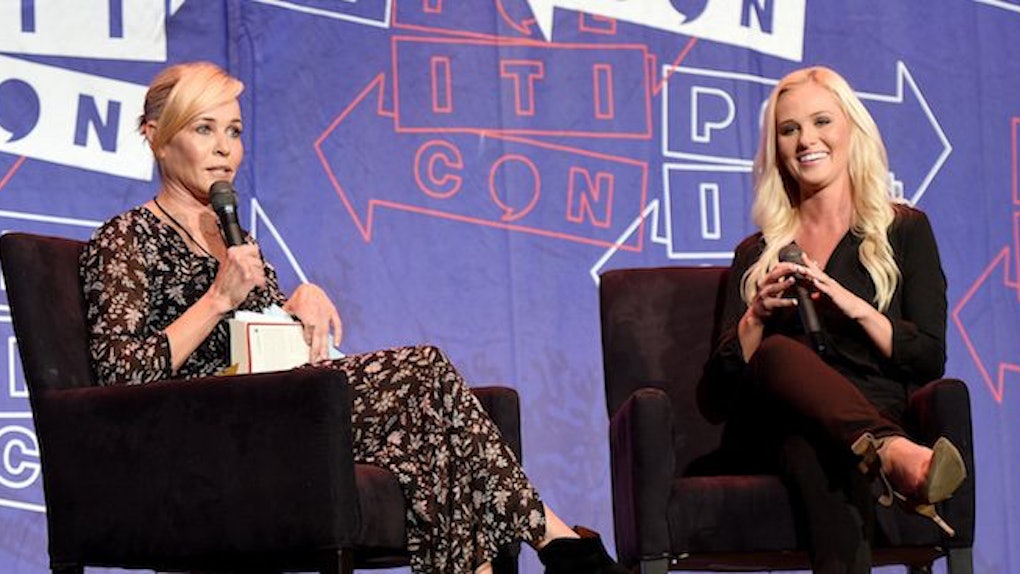 We were all eagerly anticipating the show down between left-wing comedian Chelsea Handler and right-wing pundit Tomi Lahren at Politicon this weekend, and hoo boy it did not disappoint. The two took the stage on July 29 to have a relatively civil discussion, ranging across topics from health care to the recent transgender military ban. But there was one thing that stood out from the rest.

During a spirited, if respectful, exchange about health care towards the beginning of the debate, the two discussed the ongoing attempt to legislate health care reform, including Republican pushes to repeal and replace the Affordable Care Act (ACA), better known as Obamacare. It's an issue where the two are at major odds — Lahren has been an outspoken critic of government involvement in health care, while Handler has supported it. So it wasn't surprising that it came up so quickly.

What was a little more surprising was this exchange:

LAHREN: I don't think government does well at health care, I think it's proven by the V.A. that the government doesn't do well at health care. So we need to find alternatives. What's right now is not working. What we had before Obamacare was not working. I think you increase competition, I think that's the way to do it. … I think that the free marketplace is better. HANDLER: OK, so do you have a health care plan, or no? LAHREN: Well, luckily I'm 24, so I am still on my parents'…

Lahren didn't get to finish her sentence, because the sound of the audience breaking out in laughter and boos was so loud it drowned her out.

The provision that people under the age of 26 be allowed to stay on their parents' health insurance was a central requirement of the ACA, the very same thing that Lahren has railed against. So, in short, she's benefiting from Obamacare, even as she says she's against it.

Handler quieted down the raucous noise. “Stop, stop. She's being honest,” she said, before the two continued their debate. Lahren quickly offered an explanation, saying that she didn't think that Obamacare was all bad, and there were pieces (like the requirement that young people be allowed on their parents' insurance) that should stay.

But on Twitter, the two couldn't stop the side-eye.

Some called her a hypocrite (or at the very least, pointed out the irony).

Despite the crowd (and Twitter's) heckling, though, the debate was overall civil and respectful.

Handler prefaced the event by saying that she was "interviewing" Lahren — not debating her. (Though that didn't stop the two from getting heated.)

But as ever, you can't stop the tweets.