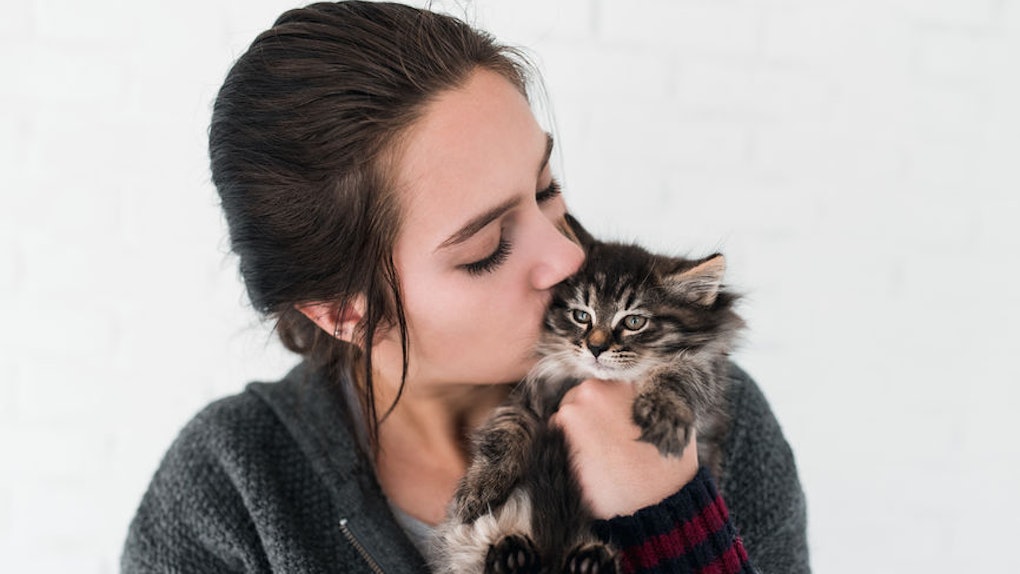 6 Signs Your Cat Loves You, Rather Than Tolerates You, According To Experts

To be honest, Kit-Kat, my 3-year-old rescue cat, often acts more like a dog than a cat. He loves following me on walks around the block, will sit for a treat, and loves wrestling with my family’s dogs. But every once in a while, insecurity creeps in, and I’ll ask myself if he really loves me. With dogs, it’s so easy to tell; their emotions seem much less complex than a cat's. Luckily, in an interview with Elite Daily, Dr. Kurt Venator, the chief veterinary officer at Purina, revealed some of the key signs that mean your cat loves you, and TBH, they're pawsitively adorable.

While noticing your kitty doing some of these things may allay some of your anxieties about whether your cat adores you or just tolerates you, Dr. Venator stresses that each little feline friend is unique, just as humans are, and therefore may show affection in different ways. Some cats are just happier with less physical contact, he tells Elite Daily, so don’t get too discouraged if your kitty doesn’t seem eager to bond. She may prefer to lurk around you, rather than sit right on your lap or rub right against your shins.

If you want to bond a little more with your cat, Dr. Venator suggests teaching her some tricks (yes, cats can learn tricks, too) or joining her for a nap in her favorite sleeping spot. "If your cat does not already seek you out to snuggle, identify a time and place your cat often takes a snooze and join him or her. The relaxing time and social contact should help to reinforce your bond," he tells Elite Daily.

But, if you're eager to identify some of the signs that mean your cat really does love you as much as you love them, here's what to look out for.

Dr. John Bradshaw, a cat behavior expert at the University of Bristol, explained in an interview with National Geographic back in 2014 that cats are essentially mimicking a mother-kitten relationship when they interact with us, especially when it comes to kneading. “They are using behavior that they would use toward their mother," he told the outlet, adding that kittens learn when they're little to raise their tails, rub against their mother, and yes, to knead and purr, to show their affection.

So when your kitty does these things to you, they're basically communicating that they see you as family. In other words, you can finally feel validated in calling yourself a cat mom.

They LOVE To Play With You

In 2016, a BBC2 documentary called Cats v. Dogs investigated whether it's our feline or canine friends that are more attached to us as their human counterparts. According to The Telegraph, Dr. Paul Zak and his team of researchers discovered that cats aren't nearly as cold-hearted as many people assume they are. Their research showed that, after playing with their owners, the fluffy felines' oxytocin levels (aka a chemical that helps researchers measure feelings of love) rose 12 percent on average. See, haters? Cats do have souls.

They Do That Adorable, Slow-Blinking Thing

"Cats are masters of subtle body language, but a cat blinking is a really solid indicator that he’s communicating his current state of contentment," Mikel Delgado, Ph.D., a certified cat behavior consultant at Feline Minds, said in a 2017 interview with the online magazine Catster.

In fact, that "slow blink" is often referred to as the super-sweet "kitty kiss," and if you ask me, those huge cat eyes are pretty much the cutest thing ever.

They Rub Against Your Face All The Time

In an article for the website The Spruce Pets, Amy Shojai, a certified member of the International Association of Animal Behavior Consultants, wrote about that adorable thing cats do where they rub their faces against yours — and in fact, there's a name for it! According to Shojai, this is called "bunting," and it's how your kitty leaves their scent on you, essentially "marking" you as their own.

They Do A Little Tail Dance

Catster explains that a "happy tail dance" is sometimes a way in which kitties express their love for you. This dance, according to the outlet, consists of gently shaking the tail while the base is fluffed out.

Well, now I'm never going to stop watching my own cat to see if he'll do that around me, because seriously, a dancing fur-ball sounds just precious.

They Purr Whenever You Pet Them

But you already knew that, didn't you? According to PetMD, purring is "one of the top ways cats show affection for their people." Going back to a kitten's earliest days, the outlet explained, purring is a sign that all is well and that your baby is content. This is probably the most universal sign that a cat is happy, but now you can be pawsitive that those chin scratches mean the world to your sweet fluff-ball.

If your kitten is doing any of these things, you can be certain that they love you almost as much as you love them. Celebrate your human-kitty bond with a nice glass of cat wine, because sharing your life with a cat is just about purrrfect.