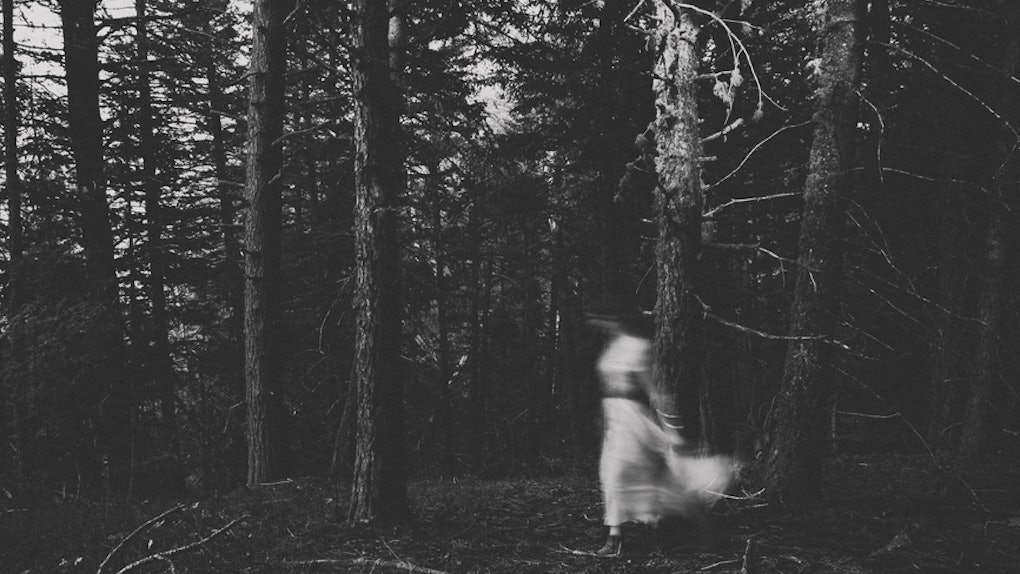 6 Scariest True Ghost Stories Of All Time, In Case You Didn’t Want To Sleep Tonight

There are a lot of ghost stories out there, especially around Halloween. When people tell these stories, as you may have noticed, they often start out by saying things like, "Apparently there's this haunted house in town," or, "My Grandpa Chuck told me this ghost story once." They're almost never, like, actual, real-deal, first-hand accounts. But let's be honest, it's the tales that actually happened to you or people you know that are the scariest true ghost stories of all time, because those other, heard-it-through-the-grapevine stories can be much more easily chalked up to a wild imagination.

Now, full disclosure, I'm pretty sure I've had at least one ghostly encounter myself. I'll never be sure, of course, but when I lived in an apartment in Greenpoint, Brooklyn, I had a variety of experiences that kind of all pointed toward the conclusion that there was a mother freaking ghost in my home. I'm talking major skin chills, mysteriously moved objects, dropped calls, and flickering lights in response to questions. I even named the ghost Elliot.

While the ghostly presence didn't feel dangerous, it definitely frightened me. Eventually, at the suggestion of my more spiritually inclined friends, I asked him to leave — and he seemed to listen.

Take a look at some others who have some really scary ghost stories, that all actually happened to them.

Reddit user Zerbo shares a story about a haunted ambulance, "rig 12" — something Zerbo thought was BS, until they had their own experience:

My partner and I were working in a rural community at 3 a.m., and it was pitch-dark and completely quiet. We were both dozing; I was in the driver’s seat, and she was in the passenger seat. I woke up to a muffled voice, and I thought my partner was talking.

I told her I was trying to sleep and closed my eyes. I distinctly heard a male voice say, 'Oh my God, am I dying?' followed by a few seconds of heavy breathing. My partner and I sat up straight and looked back into the patient compartment, where it sounded like the voice had come from.

While it was quiet for a moment after that, they heard the hiss of an oxygen tank, as though it was leaking. The two jumped out, frightened that someone had climbed in the back, but no one was in there. And the oxygen tanks were closed.

Needless to say, they didn't get much rest after that.

You may have heard word of this creepy tale, as it's been the ghost story talk of the internet. Author and illustrator Adam Ellis has been documenting his experience in his haunted apartment on Twitter for months now.

Something that started off as a series of nightmares about a creepy little boy with part of his head missing has turned into a great deal of paranormal activity: repeated phone calls, moved/disappearing objects, strange and inexplicable movement on his video motion detector in the middle of the night.

Take a look for yourself. It's not cute.

This freaky tale was submitted to Reddit by laplante_12, who had a super disturbing experience last year when they were walking to their dad's house from their girlfriend's place. The story goes;

I was walking and it was around 8 p.m. I just got to my dad's neighborhood and I had the feeling I was being followed — it felt like someone was close behind me and it didn't feel human at all.

Then I saw someone coming, riding a motorcycle coming my way, and he honked his horn. There was no one near me when I looked behind me, I saw no one, but I hear a tree rustling, it was a tall tree too. The man who was riding a motorcycle told me he saw something behind me, it wasn't human it like a black shadow with red eyes.

Uh, no thank you.

On the Darkness Prevails Reddit thread, user thrusttuba, a security officer at a manufacturing plant attached to a corporate office, shared a creepy story of a late night "visitor."

I was checking the cubicle room, making sure to check each and every cubicle in there, as is tradition at this point, before I scan my badge through the alarmed panel, so I get five seconds to leave before the alarm rearms itself. I leave and watch the door click and hear the alarm beep and rearm, and turn and walk about 10 steps when I hear the door open... No alarm goes off.

I turn around to see an old woman, too old to work in the plant and not dressed for the work in the plant. She was not an employee. She's staring right at me, and cheerfully says 'Man, I'm ready to go home!' In stunned disbelief I mutter, 'Yeah, me too.' The old lady just nodded slowly and walked to the broom closet, opened the door, and closed herself inside.

As you may have guessed, she never reappeared. It was the first and last time thrusttuba experienced something so scary at work, but it's kind of enough to last a lifetime, no?

This one comes from YouTuber MadLibbs, who woke up in the middle of the night to a hand with red nail polish on her pillow, that began to stroke her hair, and eventually said goodbye to her.

In her sleepy haze, she thought it was her mother. But the next day, she realized her mother wasn't wearing any red polish, and she hadn't come near her bed.

Take a listen, and try not to get goosebumps.

So this isn't the first time Reddit user AnnaRegina1533 has experienced a haunted house. Growing up, they lived in one where objects would move around, shadows would be seen, and children's voices would be heard, among other things.

Now it's starting to happen in her adult life. And she doesn't feel like anyone can help her.

Things have started disappearing and reappearing. I constantly feel like I am being watched, I have no energy and I've suddenly started to be plagued by nausea and headaches (which never happened before). I have been checked for any medical causes of these symptoms, to no avail.

There's an overwhelming feeling of dread and no matter what I do, I can't sleep through the night. For the few hours that I am asleep each night, I'm having the most horrendous nightmares imaginable. No rhyme or reason to the nightmares. No reoccurring themes other than terror and death.

Sure, maybe there's some kind of explanation, but it sounds like an explanation of the paranormal variety.

So, believer or not, you probably know someone who has had a pretty darn spooky and inexplicable experience. And who knows, one day you might have one, too. Here's to hoping, right?