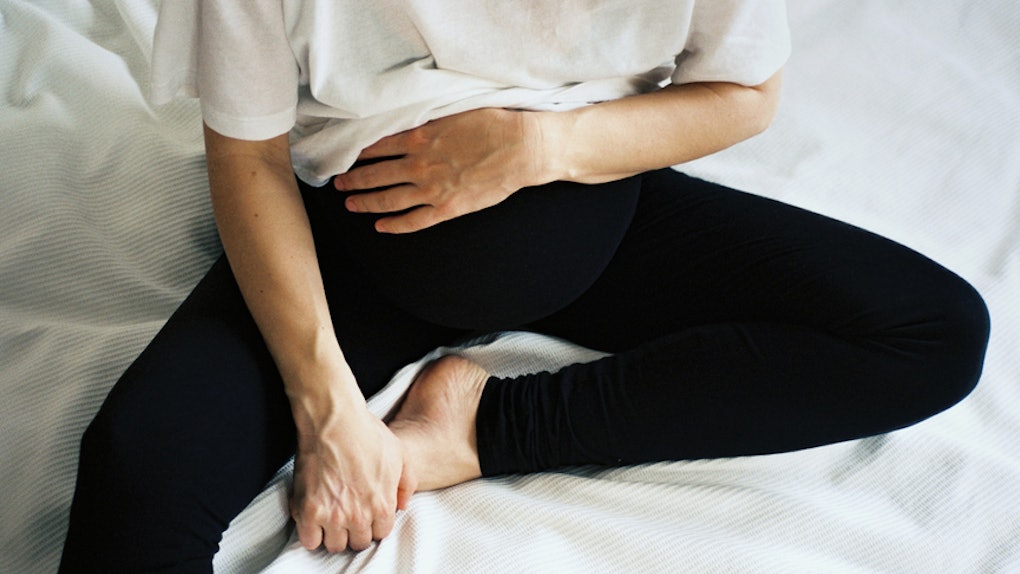 A woman’s menstrual cycle really is a beautiful thing; it’s when your hormones start acting up that it can become unsettling. There are so many factors that affect your period, too: social stressors, rampant hormones, ravenous cravings that are never satisfied with just one bite. It can be hard to decipher when a physical ailment around that time of the month is your period misbehaving, or a sign of something more serious, which is why you should be aware of PCOS red flags so that when the going gets a little too rough, you can get the help you need.

In case you’re unfamiliar with the abbreviation, PCOS stands for polycystic ovarian syndrome. Mayo Clinic defines PCOS as a hormonal disorder that affects a woman’s reproductive system, causing cysts to form on the ovaries. Women who have PCOS generally have an erratic menstrual cycle, or lose their period altogether, making it difficult to get pregnant. Unfortunately, experts have yet to narrow down the root cause for PCOS development, and there is currently no known cure. However, there are some clear signs in your body that may point to PCOS, so it’s important to familiarize yourself with them in order to get the proper treatment.

According to Dr. Hedieh Asadi, co-founder of DeoDoc Intimate Skincare, and Dr. Gunvor Ekman Ordeberg, OBGYN and medical advisor to DeoDoc Intimate Skincare, PCOS symptoms are generally easy to recognize. The cysts, however, the experts tell Elite Daily, can "only be seen during an ultrasound examination," so it's even more crucial for you to know what sort of things to look out for. Here are the biggest red flags of PCOS to be aware of.

Am I the only one who's noticed acne is basically the root of all evil? It reared its ugly (black)head when you tried chatting it up with your crush in middle school, and now, in adulthood, it could be a potential sign of something much more serious going on with your hormones.

The Insulite Health PCOS website reports 5 to 10 percent of women struggling with the disorder are also battling heinous breakouts due to a spike in the male sex hormone androgen. Luckily, PCOS acne can easily be treated with over-the-counter serums and balms, and your doctor may even prescribe medication to help control your hormones.

If you're the type of person who's never been particularly worried about when Aunt Flo will visit, start marking your calendar for her arrival to make sure she's on time every month.

Anuja Dokras, M.D., director of the Penn Polycystic Ovary Syndrome Center, told Prevention that irregular periods are a clear sign that a woman might be struggling with PCOS. What's even more concerning is that this can go a number of different ways: You might have sporadic, light periods, or heavy, prolonged bleeding, or you may skip your cycle altogether.

Bottom line: If ever there were a reason to keep track of your cycle, this is it.

3. Hair Is Growing In Unexpected Places

Unfortunately, there's such a strong stigma when it comes to women and visual body hair, which is probably why hirsutism, or abnormal hair growth, often isn't discussed as much as it should be.

On her blog The PCOS Nutritionist, founder of The PCOS Protocol Clare Goodwin explained that excessive hair growth from PCOS is caused by insulin and androgens converting "villus [soft and short] hairs are into terminal [coarse, pigmented] hairs" around the chin, upper lip, chest, stomach, and back.

Interestingly enough, she continued, because the hair on your scalp isn't particularly sensitive to these hormones, they may have the opposite effect, and cause those hairs to fall out.

One of the most common, albeit one of the most inexplicable symptoms of PCOS, is weight gain. According to Maryam Siddiqui, M.D., assistant professor of obstetrics-gynecology at the University of Chicago Medicine, insulin resistance has a lot to do with it. She told SELF,

When you have insulin resistance, your pancreas has to work really hard and make a lot of insulin just to lower your blood sugar. That is linked to weight gain and central obesity.

In addition to speaking to your doctor about the circumstances, the best way to combat PCOS weight gain, Cosmopolitan UK reports, is to approach it in a healthy way. Fuel your body with an abundance of nutrient-rich foods like fruit and vegetables to keep your blood sugar leveled, and try to create an exercise regimen you can realistically commit to, and, of course, have fun with it!

5. You're Having Trouble Getting Pregnant

It's important to note that not all women who suffer from PCOS also suffer from infertility, according to the Office on Women's Health. However, because PCOS is caused by a hormonal imbalance, it can interfere with the growth and release of eggs, which may cause issues in getting pregnant.

When your body is unable to produce enough of the hormone progesterone and, ultimately, skips a period, the undeveloped eggs will, instead, convert into cysts on your ovaries. If you're having trouble getting pregnant, be sure to talk to your doctor about getting tested for PCOS.

6. You're Having Trouble Sleeping

Who runs the world? Sleep. Excuse the Beyoncé reference, but it's true: Sleep can reveal a lot about your health, including feelings of and even serious illnesses.

According to the PCOS Awareness Association, unusual fatigue, bouts of insomnia, or generally poor sleep quality are all signs that could, potentially, point to PCOS. The hormonal disorder has been linked to what's called "sleep apnea," a condition that can cause you to stop breathing for short periods of time throughout the night, and feel almost sleep-deprived after a full night's rest.

Depression, dry mouth, mood swings, and fatigue are all symptoms of sleep apnea, according to the site SleepApnea.com, so when you're getting checked for this disorder, it's worth asking your doctor if you're at risk for PCOS.